Alberta mandates masks for most students, all staff when schools reopen 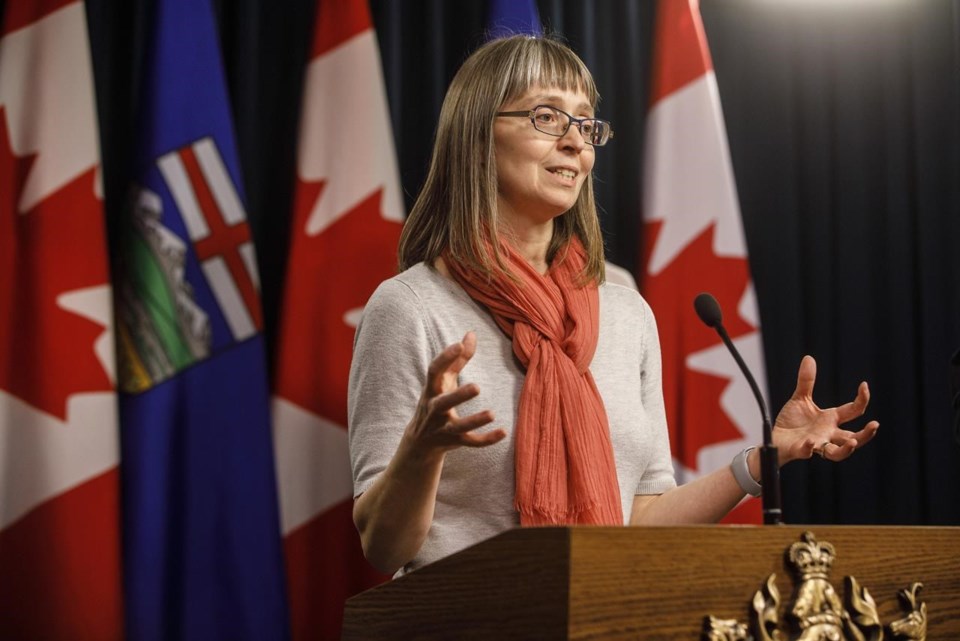 EDMONTON — The Alberta government is following the lead of Ontario, Quebec and Nova Scotia and making masks mandatory for most students and staff when schools reopen in September.

Education Minister Adriana LaGrange announced Tuesday that students between Grades 4 to 12 and all staff will be required to wear masks in common areas, hallways and on buses.

"Emerging evidence has made it clear that masks can play an important role in limiting the spread of COVID-19 in our schools," she told a news conference.

Children will not have to wear masks when sitting in class at a safe distance from others.

Masks will be optional for younger students.

"This is because mask use for younger children is a challenge due to difficulties with proper fit and compliance," LaGrange said. "Current medical evidence indicates that children under 10 may be less likely than older children or adults to transmit COVID-19."

More than 1.6 million reusable masks will be provided to 740,000 students and 90,000 staff. That will include two reusable masks for each student and staff member. Employees will also receive a plastic face shield for optional use.

Hand sanitizer will also be supplied and each school will receive two contact-less thermometers.

Alberta schools were shut down in mid-March when the pandemic took hold. The government initially announced in July that it was safe to reopen schools in September, but masks would not be mandatory.

Edmonton and Calgary have since required the use of masks in public areas.

Provincial officials have also said that the decision to return to in-person classes in September was partly based on the success of Calgary's summer school program. But last week, the local Catholic school district confirmed that a student taking part in the program had tested positive for COVID-19.

Alberta's chief medical health officer, Dr. Deena Hinshaw, said Tuesday's announcement was the result of a review of medical evidence of COVID-19 in schools around the globe, and it matches the approach being adopted in Ontario, Quebec and Nova Scotia.

Later in the day during her routine COVID-19 briefing, she said the province's back-to-school plan "provides flexibility so individuals can make the right choice for themselves and their family."

"It is important to remember how far our understanding of COVID-19 has come," she said. "In March, we did not know much about this virus, we did not know what it spreads among children, whether children were a high-risk group and what sort of locations and gatherings were major drivers of spread."

Closing schools can have significant emotional, physical and mental health affects on children, particularly those who need support from abusive or unstable family situations.

"I have children in school, I have nieces and nephews in school," Hinshaw said of those who have been critical of her office giving the green light to reopen schools.

"I have a very strong interest not only in the safety and health of all Albertans — that's my job, and I take that very seriously — but I have many people who I personally love and care about who will be in schools in the fall."

Opposition NDP education critic Sarah Hoffman said the announcement to wear masks in schools is a start, but only addresses one of 15 recommendations her party made last week.

"I think that the only reason why the government has moved on this today is because of significant public outcry," she said.

Hoffman said one measures shown to be most effective in schools elsewhere is capping class sizes. "And to make that happen, we need to make sure that this government is funding education properly to ensure we can hire the additional staff, teachers, custodians, educational assistants to make sure that our kids are safe and spread out," she said.

"This isn't opened or closed. This is about safe or unsafe."

The Alberta Teachers' Association welcomed the mask requirement but said the plan falls short of what teachers want to see.

"(The) announcement again does not adequately address the issue of distancing in Alberta's overcrowded classrooms," association president Jason Schilling said in a statement.

"The suggestion that masks need not be worn if students can be appropriately distanced within the classroom or if teachers are not working closely with students betrays a fundamental failure to understand what actually goes on in classrooms."

The Edmonton Catholic School Division also released its back-to-school plan Tuesday. Students will not have access to lockers and, when possible, will remain in the same class. Campuses are also closed, so students aren't allowed to leave during the day.

The chief superintendent of Edmonton Catholic Schools said parents will have an option for their children.

"Many are pleased that we are returning to school while others are understandably concerned ... we will be providing parents with an online option for students this fall in K-12," Robert Martin said.

This report by The Canadian Press was first published Aug. 4, 2020