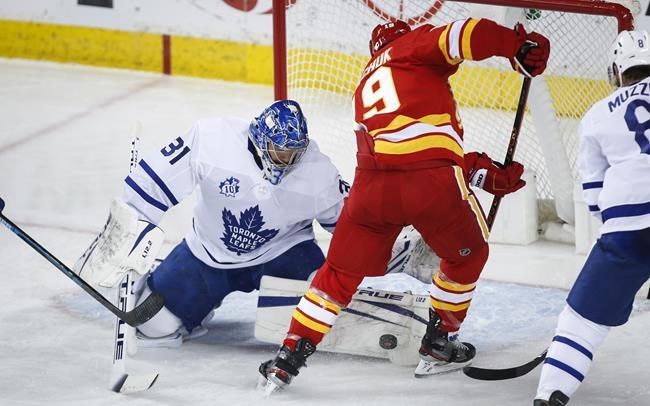 CALGARY — Mitch Marner's been working on his shot and it showed in the Toronto Maple Leafs' 4-3 win Tuesday over the host Calgary Flames.

Marner's quick one-timer amid a crowd of Flames produced the game-winner at 12:14 of the third period.

"Trying to get more of a shot mentality," Marner said.

"I feel like I really want to try and make an extra play most of the time, but this year, trying to be more of a threat and more of a guy that can be more of a consistent shooter on net, and kind of change things up a lot on goalies."

Marner, who also assisted on an Auston Matthews goal Tuesday, continues to vie for the early lead in the NHL points race.

He was tied with Edmonton Oilers captain Connor McDavid at five goals and seven assists Tuesday.

Matthews also had a goal and an assist for the Maple Leafs (6-2-0).

Gaudreau's second goal of the game drew Calgary even at 3-3 in the third period, but Marner's deceptive release on a Matthews pass from the boards restored Toronto's lead.

"We did a good regrouping in the second getting ourselves back to an even hockey game, but they win from the inside of our slot.," Calgary head coach Geoff Ward said.

"The guy is standing right between three of our guys and finds a way to get a shot off. You can't give up four goals in this league regularly and expect to win games."

Gaudreau scored top corner from the face-off circle for a power-play goal at 9:03 of the third period.

Calgary outshot the visitors 18-5 in the second period, but still trailed by a goal after two.

A Juuso Valimaki pass caromed off Leaf Alex Kerfoot's skate to Lucic in the slot for him to beat Andersen between the pads at 14:21 of the second period.

Pierre Engvall dished to an unchallenged Boyd charging into the slot. Boyd scored his first as a Leaf fishing the puck out of his feet and chipping it over Markstrom.

Unchecked on Andersen's right side, Gaudreau had time to go backhand-forehand on Toronto's goalie.

Toronto outshot the Flames 10-1 and led 2-0 after the opening period. It took nearly 16 minutes for Calgary to register a shot on net.

"That was just an awful first period from us," Gaudreau said. "Not the way we're going to win games, playing catchup the whole game."

Matthews whipped the puck over Markstrom's right shoulder at 14:16 of the first period for a power-play goal.

Simmonds scored his second goal in as many games tucking his own rebound by Markstrom's right toe at 3:44.

Leafs backup goaltender Jack Campbell was replaced in the lineup by Michael Hutchinson.

Campbell's leg was injured in the final minute of Sunday's 3-2 win over the Flames when Matthew Tkachuk fell on him in a goal-mouth scrum.

After enjoying the gentlest schedule to start the season of any team in the all-Canadian North Division, the Flames will now play 21 games in the next 40 days.

Calgary departs on a five-game road trip with two games in Montreal starting Thursday, followed by three games in four days in Winnipeg.

Toronto faces the Oilers on Thursday and Saturday in Edmonton to conclude a four-game road trip.

Notes: The Maple Leafs wore No. 10 patches on their chests in memory of George Armstrong, who captained Toronto to four Stanley Cups in the 1960s and died this week at age 90. Every Leaf wore No. 10 and "Armstrong" on their back during warmup . . . Flames winger Dillon Dube was scratched for a second straight game with an upper-body injury.

This report by The Canadian Press was first published Jan. 26, 2021.