COVID testing at the provincial site at Lynx Street in Banff is now Mondays, Wednesdays and Fridays only, but AHS says testing can be ramped up quickly if case counts begin to rise dramatically.
Jan 12, 2021 3:30 PM By: Cathy Ellis 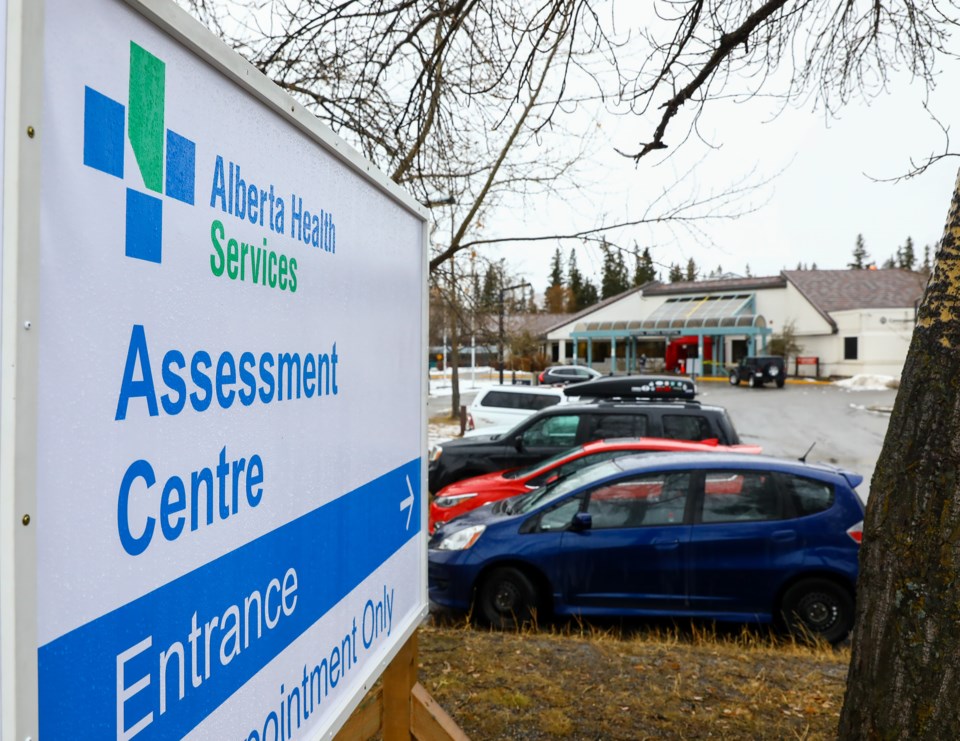 The provincial testing site at the Banff community health centre at 303 Lynx St., is now open Mondays, Wednesdays and Fridays only from 9:30 a.m. to 5 p.m. EVAN BUHLER RMO PHOTO

BANFF – Alberta Health Services has scaled back COVID-19 testing in Banff to three days a week due to lower case counts and a drop in demand for testing for the virus.

As of Tuesday (Jan. 12), there were 15 active cases of COVID-19 in Banff and Lake Louise, down from a high of 191 at the end of November and high case counts continuing into December.

Silvio Adamo, the Town of Banff’s director of emergency management, said testing is still available at doctors’ offices in Banff and Lake Louise, but the provincial testing site on Lynx Street is now open on Mondays, Wednesdays and Fridays only as opposed to five days a week.

“In discussions with the Calgary Zone emergency operations centre, Alberta Health Services will continue to monitor demand and be prepared to ramp up testing in our area if needed,” Adamo said during his Jan. 11 briefing to Banff town council.

“I believe this is a reasonable approach, understanding that Alberta Health Services needs to meet the demands of the entire province with limited personnel.”

During the week of Dec. 8-14 when Banff was in the midst of a COVID-19 spike, there were approximately 560 COVID-19 tests completed in Banff, compared to 122 tests last week between Jan. 2-8.

“That’s a significant drop in the demand for testing, which again is a very positive indicator for our community and our region,” Adamo said, noting residents of Lake Louise, Canmore and beyond can get tested in Banff.

Banff and Lake Louise have recorded a total of 391 COVID-19 cases since the pandemic hit Alberta in March 2020. Of those, 376 have recovered and 15 are still listed as active.

Currently, there is only one individual in one of Banff’s two isolation centres.

Mayor Karen Sorensen said it is great to see the COVID-19 case numbers going down.

“But for sure, the spike we saw not so many weeks ago was absolutely an eyeopener for this community,” she said.

“We are not immune, and the pandemic is still very much with us.”

Adamo said Banff’s COVID-19 case counts have plateaued at numbers in the mid-teens since the end of December.

“We do want to remind people that we are still seeing new and active cases every week, although they are obviously dropping,” he said.

“We’re certainly not where we were at the end of November with that big spike, but we are still seeing active cases pop up in our community, so we’re definitely not out of the woods.”

Meanwhile, 23 residents of St. Martha’s long-term care facility and 27 health-care workers at Minerals Springs Hospital have now been vaccinated on site. Some health-care staff at the hospital have also had their vaccine shots in Calgary.

Residents at Cascade House and some staff were vaccinated Monday (Jan. 11).

Adamo said this is a great news for Banff.

“This is the first step on protecting our most vulnerable and those that care for them,” he said.

Coun. Corrie DiManno asked how well people abided by the municipal and provincial restrictions aimed at slowing the COVID-19 spread over the Christmas holidays and new year period.

“Were there social gatherings called in over the holidays?” she questioned.

“There was some activity over the holiday season, but it was very minimal,” Adamo said, noting phone-in and online complaints were investigated as quickly as possible by RCMP or municipal enforcement.

“I do not believe that any of the investigations resulted in any violations being issued, only warnings.”

For now, the state of local emergency remains in place in Banff.

However, Adamo said there may be a recommendation coming to the emergency management committee, which is made up solely of Banff’s mayor, to possibly rescind it.

He said some of the drivers for the state of local emergency declared during the COVID-19 spike have effectively been met: raising public awareness, raising awareness in the province, establishing an isolation facility and provincial testing.

“If we feel at any time there is a need or a crisis emergency that we believe we need a state of local emergency, that can be reinstated very quickly,” he said.

Adamo said he is pleased with where Banff is at the moment in its fight against the pandemic.

“But as always, we must all stay vigilant in our day-to-day decisions and actions to stop the spread of this virus in our community,” he said.

“We’ve seen if it does get in, it is very hard to control and can spread easily.”