Banff a COVID-19 hotspot in Alberta 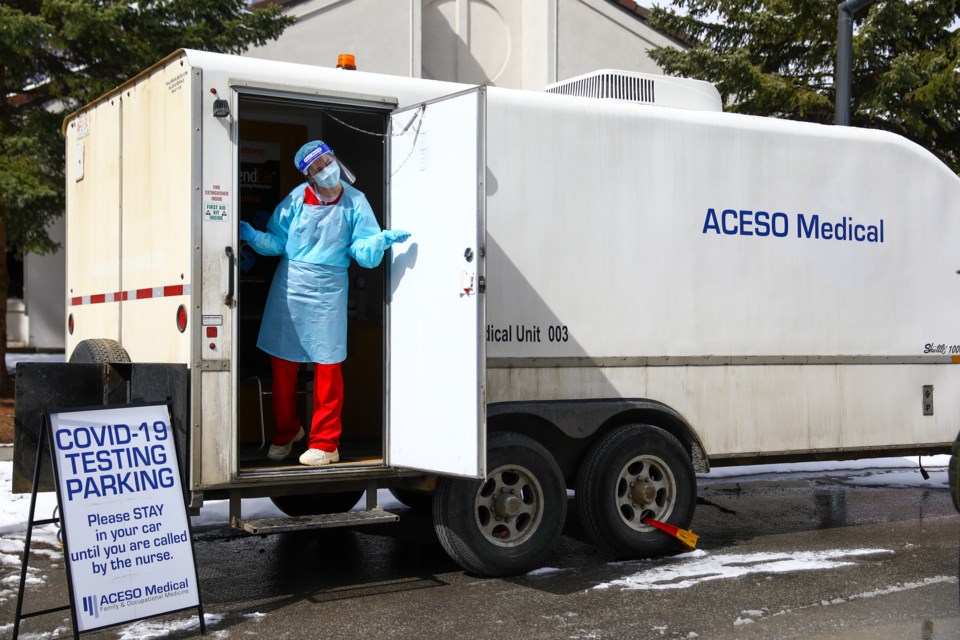 BANFF – The province of Alberta has no plans to roll out a mass vaccination program in busy Banff in the same vein as British Columbia has done for its premiere resort town of Whistler.

However, Alberta did fast-track Banff Lodging Company’s application to run an isolation facility out of the Red Carpet Inn – with 47 of 53 rooms full as of Monday (April 19) – as Banff continues to be a provincial COVID-19 hotspot.

With 136 active COVID-19 cases, including contagious variant strains from the United Kingdom and Brazil, Banff and Lake Louise had the second highest per capita case count in Alberta on Monday. One month ago, the region contained COVID to three cases.

The Town of Banff, along with Banff Lodging Company, which had an outbreak last month, continues to lobby the province for mass vaccinations given Banff is a busy tourist town.

“With limited supply, we are focusing on those who are most at risk of severe outcomes,” Tom McMillan, assistant director of communications with Alberta Health said on Monday.

“All Albertans, including those in Banff and Canmore, who have underlying health conditions, and 40 and older, can book their appointments today. We are not deviating from this approach at this time.”

With rising COVID-19 cases, Alberta Health Services (AHS) boosted testing in Banff, including hiring a contractor to do on-site testing at Sunshine and Lake Louise ski hills earlier this month, and setting up a pop-up testing site located outside Mineral Springs Hospital for the past two weekends.

The provincial health unit on Lynx Street is open for vaccinations weekdays for those eligible under the province's vaccine roll out, and AHS plans to run the pop-up facility again this coming weekend on April 24-25.

Silvio Adamo, the director of emergency management for the Town of Banff, said 175 people were tested at the pop-up site last weekend, April 17-18, resulting in a positivity rate of 26 per cent.

“That is very high – almost 2.5 times the provincial positivity rate – and emphasizes why people need to follow the health recommendations and requirements,” he said. “COVID certainly has a strong hold on us here in the valley and we have to do everything we can to shake it loose.”

The rising case count over the past three weeks has overwhelmed Banff’s quarantine spaces at the YWCA and at the municipally-run facility at The Banff Centre, prompting the municipality to reach out to local hoteliers for help.

The Banff Lodging Company immediately stepped up to apply to have the Red Carpet Inn designated as an isolation facility, which was up and running on Saturday (April 17).

As of April 19, 47 of the 53 isolation rooms at the Red Carpet Inn were full and the eight spaces at the YWCA isolation facility were at capacity. The individuals in Banff’s isolation spaces come from more than 25 different employers, representing a range of hospitality, tourism and trades industries.

“We were allowed to transition all of our Banff Centre isolation folks, which has 17 rooms, over to the Red Carpet Inn to give our emergency social services team a bit of a break because they were servicing that facility,” Adamo said.

As of April 19, the Moose Hotel & Suites was the only place in Banff National Park considered an outbreak site – based on the public reporting threshold of 10 or more cases linked to a business.

AHS declares an outbreak over when four weeks have passed since the last case was identified. The website will be updated on Tuesday (April 20), listing any other outbreak sites.

According to Banff Lodging Company officials, a total of 15 employees at the Moose Hotel & Suites have tested positive since March 27, with only one active case remaining in quarantine as of April 17.

“The primary cause of transmission occurred as a result of close residential living environments,” said Chris Thorburn, the company’s vice-president of operations in a news release.

Once notified of the first positive case, Thorburn said Moose Hotel & Suites continued to follow all AHS protocols, including aggressive contact tracing, which resulted in self-isolation for a number of employees.

“Management also proactively removed all remaining Moose Hotel employees from the worksite, provided rapid testing and private residence options for those awaiting test results,” he said. “A negative COVID-19 test result was required prior to any employee returning to work.”

As an additional precaution, Pacini Restaurant and the Meadow Spa were closed for a brief period over two days.

No guests of the hotel were considered to be close contacts or at risk of transmission.

“Banff Lodging Company continues to provide ongoing asymptomatic rapid testing to its 600 employees and is advocating for an immediate vaccination program for the busy resort town’s unique population,” Thorburn said.

With many of Banff’s tourism industry staff living in communal accommodation, Adamo stressed the need for isolation for those who test positive, or are considered a close contact of a positive case.

“The supports are there for isolation and we’re working to expand that isolation inventory even more,” Adamo said.

“Folks need to make an effort to isolate and to not go to work if they are a close contact, or they are not feeling well – and go and get tested.”

It is critical people continue to follow all COVID-19 public health orders, including no indoor social gatherings and social-distancing protocols in order to get a handle on rising cases.

“I know people are social and they need that interaction, but they have to try to show some discipline over these next several weeks if we’re going to have any chance of bending this curve down,” Adamo said.

In Canmore, there were 79 active COVID cases and 19 in the MD of Bighorn, which covers Harvie Heights, Lac Des Arcs, Exshaw and Stoney Nadoka at Morley.