A variety of topics were up for debate at the Cochrane Alliance Church, ranging from alternative energy, climate change, gender pronouns, free speech, pharmacare and equalization payments in Canada
Oct 3, 2019 3:00 PM By: Jenna Dulewich 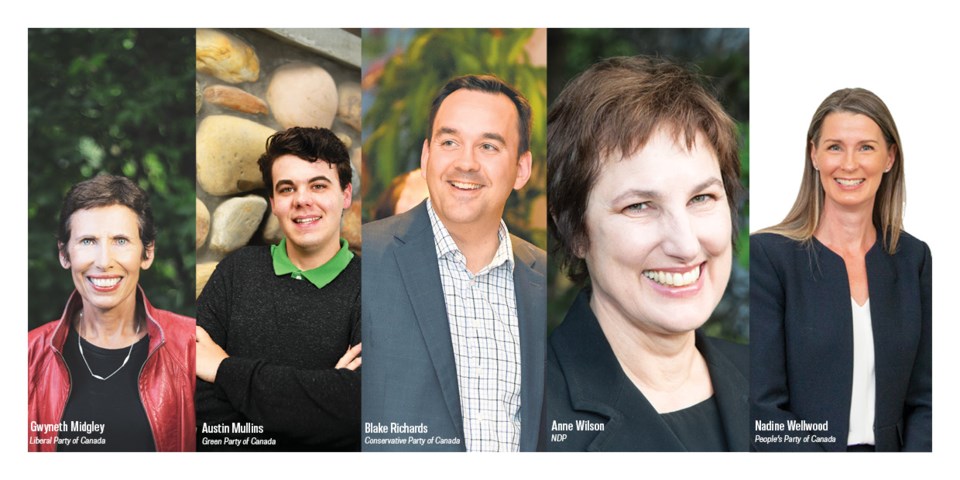 COCHRANE – Candidates running to represent the Banff-Airdrie riding in Parliament were put to the test by constituents in Cochrane at the first forum to be held during the election campaign on Tuesday night (Oct. 1).

A variety of topics were up for debate at the Cochrane Alliance Church, ranging from alternative energy, climate change, gender pronouns, free speech, pharmacare and equalization payments in Canada.

The first question to begin the night, from moderator and former Cochrane Eagle senior reporter Lindsay Seewalt, related to climate change and how the individual parties planned to tackle the issue.

Richards said the Conservative government would help the environment by focusing on technology and energy products, Wilson said the NDP would declare an immediate climate emergency, Green Party candidate Mullins said the party would focus on policies such as banning fracking and reducing carbon emissions, and PPC candidate Wellwood said her party would not do anything about a climate emergency that they say doesn't exist.

During the community question period, a young adult moved forward a question directed to Wellwood quizzing the potential leader on what her party would do if climate change becomes a huge problem and the PPC was not prepared due to its denial of the problem.

"Canadians are very innovative with some of the smartest people on the planet in this country, so I honestly believe we can face just about any challenge that is thrown at us," Wellwood said, noting she has a little girl who is eight years old, who she wants to "live out her dreams and think about rainbows and unicorns."

Pipelines, nuclear power and alternative energy were also hot topics of conversation in the debate, as Richards and Wellwood advocated for more pipelines for the province to promote job opportunities for Albertans, while Wilson criticized the former government for getting the pipeline approved, but the project being held up in an appeal process due to the insufficient consultation process.

"It is just stuck because the process was really flawed right from the beginning," Wilson said.

Green Party candidate Mullins noted he is not against pipelines, but does not believe the current projects are in Canada's best interest and the Green party would support clean energy as a priority.

Free speech and censorship were other issues brought up in the community question round where candidates got a little heated, as they discussed Bill C-16, established in 2017 amending the Canadian Human Rights Act to add gender identity and gender expression to the list of prohibited grounds of discrimination.

Mullins agreed free speech is an important part of Canadian democracy but noted when it infringes on the rights of Canadian people then it is hate speech.

"If we don't protect people then we are not living up to our Canadian values ... we would always protect free speech, but that doesn't mean we would condone hate speech," Mullins said.

Wilson noted it is provocative for an individuals to say they get to determine another person's gender and pronoun and said to endure being called the wrong pronoun all the time would probably be awful and considers it hate speech.

Richards gave an anecdote of how he is an advocate of free speech, citing the time he door knocked to get people to sign a petition against the Canada Summer Jobs program change that announced a funding halt to organizations that did not meet the mandate to respect individual human rights in Canada, including reproductive rights.

Candidates were also spilt on the pharmacare and equalization issues, as Mullins advocated support for medicare and Wilson advocated for pharmacare while Wellwood talked about bringing back affordability to families so they can decide how to best spend their money and Richards spoke about the current deficit.

When discussing the equalization formula, Wilson noted Alberta does not directly give money to Quebec and said the equalization formula is for important programs such as health care across the country, while Richards and Wellwood acknowledged it is not a perfect system. Richards said he will always stand up for Alberta, and Wellwood said the current formula inhibits the "have-not" provinces from developing their economies. Mullins said while he acknowledges the system can change, the Green party candidate thinks Alberta can assist the smaller provinces that are struggling.

One of the biggest disagreements happened towards the end of the debate when the candidates were questioned on the treatment of Rebel Media employee David Menzies, who was removed from a Conservative event last month.

Wilson was booed when she noted the Rebel Media is not accredited press and you cannot throw a journalist out if they are not a journalist. Mullins admitted to not being informed on the event and agreed with Wilson that Rebel Media is not press, but said no one deserves to be kicked out. Wellwood applauded Menzies career calling him an accredited journalist and said the display was a blatant act of censorship, while Richards defended his party's decision noting Menzies did not have his media accreditation.

During closing remarks, Wellwood spoke about building pipelines, getting Albertans back to work and balancing the budget in two years. Richards said he would continue to work hard for Albertans with positive conversations, visions and policies that make a difference.

Mullins said the Green party would tax large corporations such as Facebook, Google and Amazon to balance the budget. Wilson advocated for an increased taxation to those earning more than $200,000 from 35 to 37 per cent a year and cautioned the audience that voting for parties that take away your services is not a good idea.

To watch the full debate, go to the Urban Casual Cochrane Facebook page, or catch the federal candidates in Canmore on Oct. 11 at the Move Mountains: Candidacy Social at the Canmore Opera House or on Oct. 17 at the Federal Candidates Forum at the Malcolm Hotel.