Banff council voted 6-1 to approve $4,000 to fund the studded tire rebate program in a bid to promote and reward winter cycling by residents
Nov 22, 2019 3:30 PM By: Cathy Ellis 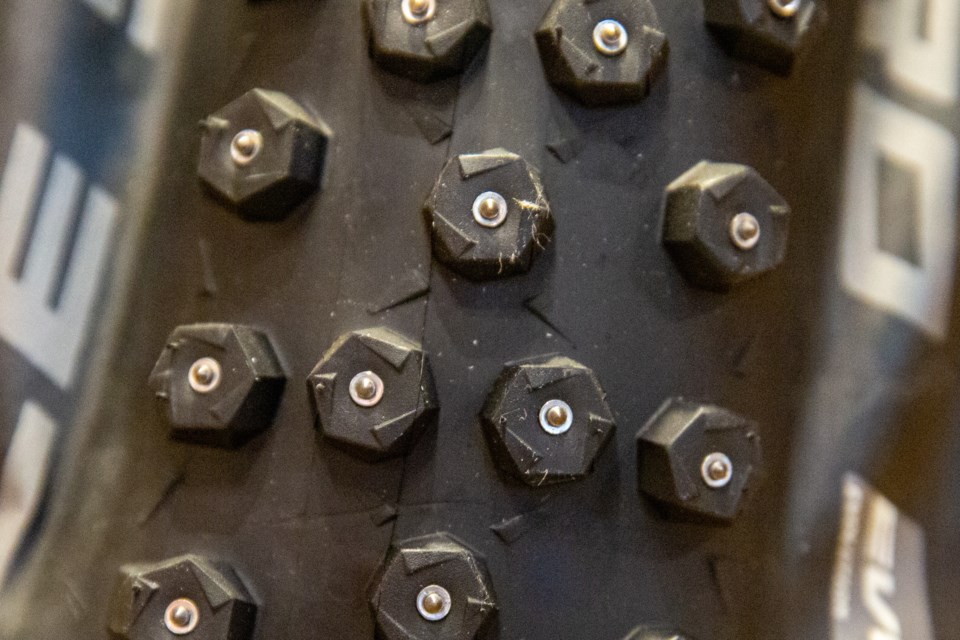 The Town of Banff offers residents a subsidy if they purchase studded-tires for their bicycles to commute during winter months. EVAN BUHLER RMO PHOTO

BANFF – Council didn’t waste time spinning its wheels on approving a studded bike tire rebate program for the second year in a row.

At a meeting Tuesday (Nov. 12), council voted 6-1 to approve $4,000 from the municipality’s environmental reserve to fund the studded tire rebate program in a bid to promote and reward winter cycling by residents.

This year, a minor change to the program provides a larger rebate to Banff Access Program members of $60 per tire and a lesser rebate to non-members of $40. Studded tires range in price from $70 to $200, or even more for studded fat bike tires.

“It was actually fully subscribed within four weeks and I have had half a dozen inquiries in the last six weeks about whether this program is happening again this year.”

Last year, council approved $5,000 for the inaugural program, providing a rebate of $50 per tire, with a maximum rebate of $100 per resident for a pair of tires.

Hay said a total of $4,977 in rebates was handed out, corresponding to 94 individual studded tires and three studded tire conversion kits.

“This program hit 49 separate households last year … for a town the size of Banff that’s fairly significant,” he said.

Councillor Corrie DiManno voiced strong support for the rebate program, noting Banff’s strategic plan calls on the municipality to strive for the highest levels of active transportation rates in Canada.

“To me, this is one of those low-cost, but high-impact initiatives,” she said.

“I love it for a number of reasons; it extends commuting into the winter for folks, the program was fully subscribed last year and I think it rewards people for behaviour that we are wanting to see.”

Coun. Ted Christensen was the only councillor to vote against the rebate.

He said he appreciates the success of last year’s program, but couldn’t support it based on potential funding cuts to some community service programs following news coming out of the provincial budget.

“I can’t support the motion just on principle,” he said. “I know it comes from our environmental reserve, but I think it sends the wrong message.”

Coun. DiManno said she empathized with Coun. Christensen’s concerns, but noted those hard discussions will be had during upcoming service review and budget.

“This incentivizes folks and, in fact, it helps them afford things, so I think if anything this is one of those ones you do support in hard times,” she said.

A 2017 census showed Banff had high rates of residents walking and biking, but the number of people biking dropped off in winter.

Cycling was cited as the primary ‘commute to work’ mode by 17 per cent of the population in summer. However, this drops to only two per cent in winter.

“Although there are a lot more bicycling in the summer most of those cyclists choose to drive their vehicles to work in winter,” said Hay.

“Winter cycling carries obvious health benefits as long as the commute is safe – and that is the key word.”

An e-bike rebate program is also currently being considered by administration, which would be brought to council for a final decision.

The studded tire rebate program is retroactive active to Nov. 6.