“I don’t want to jump the gun. The numbers from the holidays have some uncertainty in them because of the low number of tests, and there’s a real risk of an increase due to the holidays."
Jan 6, 2021 10:18 AM By: Cathy Ellis 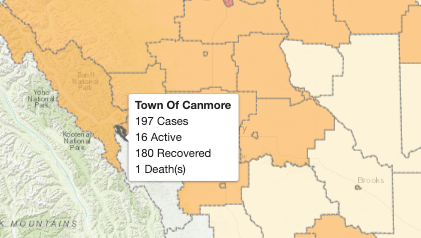 BOW VALLEY – Banff and Canmore continue to see much lower COVID-19 cases than four to five weeks ago.

In the past week, Canmore’s positive case count bumped up slightly from 14 at the end of December to 22 by Tuesday (Jan. 5) – still well below the high of 93 in early December.

Banff and Lake Louise, which reached 191 cases at the end of November and was one of the province’s hotspots in terms of per capita cases of the virus, has 16 active cases.

In neighbouring Kananaskis Country, there are currently nine active cases, and 29 in the Municipal District of Bighorn, which includes Harvie Heights, Exshaw and Lac Des Arcs.

Provincial officials say they are concerned there could be a spike in COVID-19 cases province-wide again if people ignored public health measures and had social gatherings over the Christmas break and on New Year’s Eve.

Alberta Health Minister Tyler Shandro said the numbers are starting to come down, but the province’s current positive case count of 13,411 is still far too high.

“I don’t want to jump the gun," he said during the Jan. 5 COVID-19 briefing. "The numbers from the holidays have some uncertainty in them because of the low number of tests, and there’s a real risk of an increase due to the holidays.”

“We turned the corner on cases before Christmas, and lower case numbers have also changed the curve of cases coming into hospitals. They’re still far too high, but they’re flattening.”

Over the previous 24 hours, AHS identified 843 new cases of COVID-19 in the province and completed more than 10,300 tests. The overall positivity rate is 8.2 per cent.

“Our health care system remains under significant pressure with 919 people in hospital, including 140 who have been admitted to the ICU,” said Dr. Deena Hinshaw, Alberta’s chief medical officer of health, during the Jan. 5 briefing.

Hinshaw stressed that COVID-19 continues to threaten the health care system and well-being of friends, family and neighbours.

“We are seeing a stabilization in cases with occasional days of low new cases due to lower testing volumes, but overall new case numbers, hospitalizations and ICU admissions for COVID are still very high in our province,” she said.

While vaccines continue to arrive in Alberta, Hinshaw said shipments are limited and it will be months before immunization can be offered to the general population.

“While we work to offer vaccines to those at highest risk, we must continue to act as the vaccine for each other right now,” she said.

“Please keep following the public health measures in place and limit your in-person interactions wherever possible,” she added.

“That is the only way to protect our health system, protect each other and limit the spread in the weeks ahead.”

Based on analysis from Hinshaw and her team, the government has indicated the spike in cases province-wide in November and December was linked to Thanksgiving celebrations in October.

Shandro said the cabinet COVID-19 committee plans to meet later this week to talk about the current restrictions, including on businesses, which remain in place until at least Jan. 12.

“We will be reviewing some of the data that we’re seeing over the holidays, and I’ve mentioned, we have to be careful,” he said.

“The reliability of some of the holiday testing has to be looked at in a particular way, because not as many people wanted to get tested during the holidays.”

To report a concern about potential gatherings in Banff, go to https://banff.ca/covid#Complaint.

Under the current provincial rules, visits from people not from the same household are not allowed and those caught could face a fine of $1,200.