“We were actually very hopeful late last week that we were going to be able to report zero active cases today, but a few new cases were reported very late last week and through the weekend," said Silvio Adamo, the Town of Banff’s director of emergency management.
Feb 23, 2021 8:30 AM By: Cathy Ellis 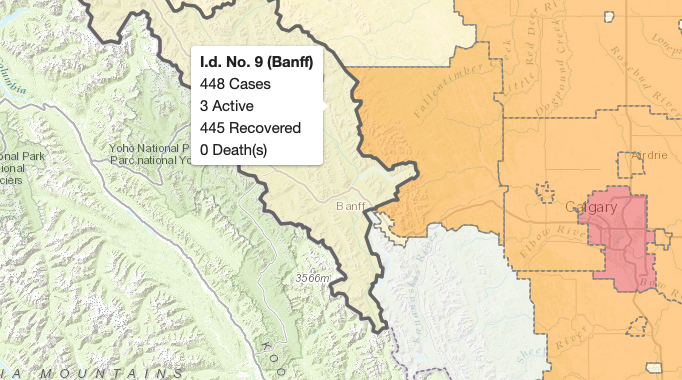 Banff has three active COVID-19 cases and Canmore has one.

BANFF – As Banff and Canmore drop to extremely low COVID-19 case counts,  provincial health officials warn there are some concerning developments with cases rising throughout Alberta.

There are three active cases in Banff, one in Canmore and 13 in the MD of Bighorn, which includes Harvie Heights, Exshaw, Lac Des Arcs and Stoney Nakoda at Morley.

Silvio Adamo, the Town of Banff’s director of emergency management, said the municipality is very happy with the drop in active cases in Banff and Lake Louise.

“We were actually very hopeful late last week that we were going to be able to report zero active cases today, but a few new cases were reported very late last week and through the weekend,” he told council on Monday (Feb. 22).

“It does indicate that the virus is still in our community and, as always, we need to continue diligence and need residents to follow all the rules and protocols in place.”

But with case counts no longer declining in Alberta, provincial health officials announced on Monday that no decisions on lifting further restrictions as part of the step 2 relaunch will be made until at least March 1.

“Any time that our reproductive number is greater than one, it means our cases are rising,” said Dr. Deena Hinshaw, Alberta’s chief medical officer of health, during her news conference on Monday afternoon.

“We are below the threshold of Step 2 hospitalizations, but we have seen growing cases in recent days.”

With that in mind, Hinshaw said the province will take the full three weeks to assess the data and determine the best way forward.

“No decisions on moving to Step 2 will be made prior to March 1 at the earliest,” she said.

“We are being cautious as it is too early to say if this recent increase is significant or but a temporary pause in the strong downward trend we have seen over the past several months.”

In Banff, there have been a total of 448 COVID-19 cases reported since the pandemic began.

“We came down to one active case on Feb. 15,” said Alison Gerrits, who is an assistant director of emergency management in the Town of Banff. “The last few days we’re back up to three active cases.”

Gerrits said COVID testing continues in Banff, with 207 tests undertaken over the past two weeks.

She said this does not take into account residents who are tested outside of Banff.

“We’ve been pretty consistent over the last six weeks of around 200 to 260 tests conducted within those two week time frames,” Gerrits said.

Over the busy Family Day long weekend and throughout that week, Banff’s COVID safety ambassadors and municipal enforcement, as well as the RCMP, were out in full force.

“Strong mask compliance was noted, with only one complaint received by the RCMP on restaurant operations,” Adamo said.

With Banff’s low case count, council decided to let its commercial restrictions bylaw – which prevents liquor and cannabis stores from sales after 10 p.m. – expire at midnight on Feb. 22.

Coun. Ted Christensen, however, voiced opposition to that.

“I think the inconvenience is minor … and we are still on guard,” he said.

Meanwhile, there are 4,675 active COVID-19 cases throughout Alberta as of Feb. 22. There are 324 people in hospital due to the virus, including 53 in intensive care.

In the previous 24 hours, there were 16 additional deaths reported, bringing the Alberta’s COVID-19 death toll to 1,843.

But Hinshaw said there is reason for hope, noting there has been a downward trend in the number of deaths reported from averaging a high of 167 deaths a week at the end of December to 23 over the past seven days.

She said other positive trends in the fight against COVID-19 include long-term care facilities, whose residents are among the highest risks of severe outcomes from this virus.

Two out of every three deaths have been in a long-term care or designated supportive living facility, Hinshaw said, noting there has been a sharp decline in long-term care cases over the last few months.

In addition, the number of long-term care facility outbreaks with active cases has dropped from 74 on Dec. 20 to just five on Feb. 16.

“Everyone of us should take pride in this turnaround, as it is the result of not only our immunization campaign, but also of our collective efforts to bring our new case numbers down,” Hinshaw said.

The same steep decline has been seen in designated supportive living facilities.

Hinshaw said Alberta reached a peak of more than 1,300 active cases in these settings on Christmas Day, adding that cases in these facilities have dropped by 88 per cent over the last seven weeks.

“These emphasize for us both that the public health measures have worked, and that vaccines can have a tremendous protective effect for those who are most at risk,” she said.

Hinshaw said the progress that has been made is not guaranteed to last unless people’s actions stay consistent.

“COVID-19 still poses a threat to our province and our choices still deeply matter,” she said..

“Our cases are starting to plateau instead of continuing to drop.”