“In both of our cases, both in the Regional Municipality of Wood Buffalo and ID9, we likely are somewhat under-reported as to what is actually the case on the ground."
Apr 29, 2021 2:00 PM By: Cathy Ellis 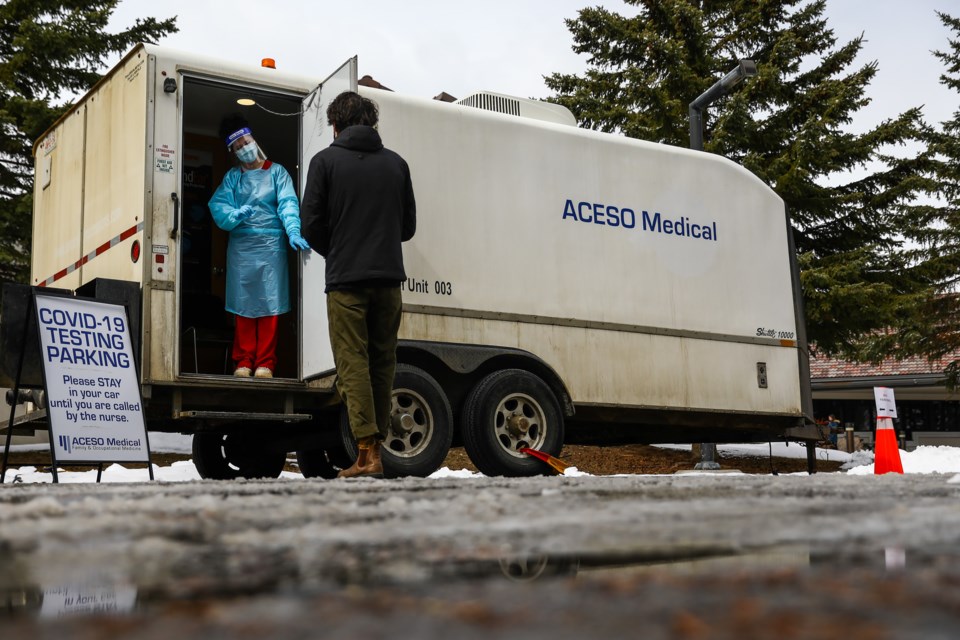 BANFF – The Town of Banff continues to flag concerns that the COVID-19 case count in the tourist town is higher than reported.

Town of Banff officials say they have suspected there’s been under-reporting of positive cases of the virus since the beginning of the pandemic because of Banff’s transient workforce who may have health care cards from other provinces.

“This has been an ongoing challenge and it is been something we have flagged from the beginning,” said Alison Gerrits, who sits on the Town of Banff’s pandemic emergency response team.

In some respects, Gerrits said it was easier to get a better handle on the true number of active cases during the last COVID-19 wave in Banff and Lake Louise, which peaked at 192 active cases at the end of November.

“The reason for that was that before we had the provincial assessment centre located here, our local clinics were doing the bulk of the testing, and when we realized this was an issue, outbreak codes were tied to the clinics,” she said.

“All tests processed through those clinics were assigned an outbreak code, which tied them back to Banff regardless of whether the person had a health card from out of province.”

There were 156 active cases in Banff and Lake Louise on Wednesday (April 28).

In neighbouring Canmore, there were 58 active cases, and four in the Municipal District of Bighorn, which includes Harvie Heights, Exshaw, Lac Des Arcs and Stoney Nakoda at Morley.

As of Monday, only the Regional Municipality of Wood Buffalo, which includes Fort McMurray, had a higher per capita case count of 1,300 per 100,000, with 1,086 active cases.

Banff and Wood Buffalo’s case rates compares to the provincial per capita case rate of 455 and the national rate 227 on April 26.

Since the pandemic began, there have been 740 COVID-19 cases in Banff and Lake Louise.

Gerrits said she expects Banff’s cases may surpass the previous peak of 192 active cases in November in the coming days, noting the week of April 18-24 recorded 83 new COVID cases in this region and 77 the week before.

“We are now up to 239 cases identified this month as of yesterday (Sunday),” Gerrits said.

Councillor Peter Poole, who initially brought up the concern of under-reporting at council’s meeting on Monday (April 26), said he wanted to find out the estimate of cases being under-reported for Banff National park.

Coun. Poole said he suspects council would be willing to throw its political support behind writing a letter to the province of Alberta to fix this data coding problem.

“If it’s a problem at Precision Labs in Alberta reporting to AHS – AHS is paying them hundreds of thousands of dollars – and they’ve got a database that could change that in a heartbeat,” he said.

“If you need our political support, our council will write a letter on that without hesitation, I am sure. Let’s get this solved.”

Gerrits said she wouldn’t feel comfortable giving an estimate as to what the under-reported case count may be.

But she assured council the municipality is trying its best to align the cases that get diagnosed on a daily basis with what lands at the Bow Valley Primary Care Network.

“We continue to see if we can sort it out,” she said.

“I think potentially the answer could lie in generating more of these outbreak codes.”

The Municipality of Wood Buffalo, which declared a state of emergency on Sunday (April 25), is reporting similar concerns as Banff.

“In both of our cases, both in the Regional Municipality of Wood Buffalo and ID9, we likely are somewhat under-reported as to what is actually the case on the ground,” Gerrits said.

On Wednesday, Minister of Health Tyler Shandro announced that 30,000 doses of the Johnson & Johnson vaccine would be diverted to the two hardest hit regions of the province: Banff and Wood Buffalo. Shandro also said the eligibility age to receive the vaccine in these two regions would be lowered to 30.