BANFF – Plans by Liricon Capital to build an intercept parking lot and a gondola to Mount Norquay are one step closer to reality after council endorsed the project’s terms of reference on Monday (Feb. 11).
0
Feb 14, 2019 12:00 AM By: Paul Clarke 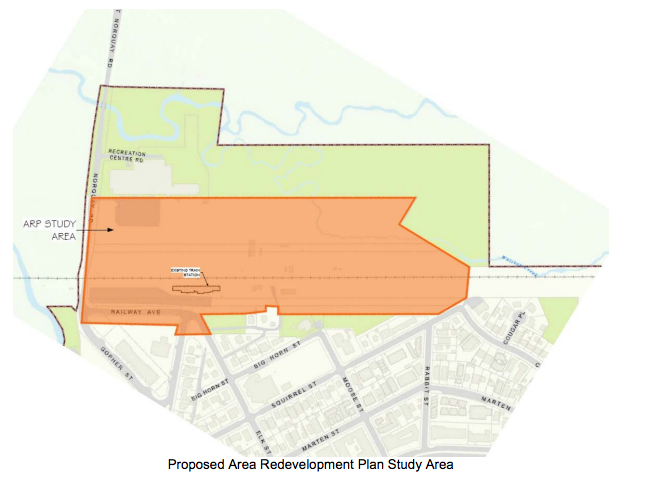 The area redevelopment plan, outlined in orange, is the study area for Liricon’s intercept parking lot.

BANFF – Plans by Liricon Capital to build an intercept parking lot and a gondola to Mount Norquay are one step closer to reality after council endorsed the project’s terms of reference on Monday (Feb. 11).

The terms of reference allows the municipality to begin working with the community to draft an area redevelopment plan for the dilapidated railway lands at the west entrance of town.

“This is the next step in the planning process for these lands that will provide a planning framework and supporting policies to guide development over the course of the next five to 10 plus years,” said Randall McKay, director of planning and development for Banff.

The majority of the study area is located within the Canadian Railway land use district and includes the Canadian Pacific Railway right-of-way, the train station and lands north of the tracks.

In March 2018, the Municipal Planning Commission approved a plan to build a 493-stall intercept parking lot at the Banff train station in a bid to deal with the town’s traffic congestion.

Liricon Capital, the personal financial holding company of Jan and Adam Waterous, had initially proposed developing a parking lot for 620 vehicles, 24 buses and 20 RVs, however administration recommended reducing the plan to 516 stalls to allow for a bigger buffer zone between the parking lot and homes in the area.

The planning commission took it a step further and decided to remove even more parking stalls to allow for more buffering along Squirrel Street, specifically for RCMP staff residences located closest to the lot, bringing the total number of parking stalls down to 496.

According to the municipality, the area redevelopment plan will help guide future development by describing the objectives of the plan and how they will be achieved, establish land uses and development standards and preserve or improve buildings in the area.

The area redevelopment plan will also lay out how to establish, improve or relocate roads, public utilities or other services in the area, facilitate any other development in the area, or other proposals that council considers necessary.

“It gives council fairly wide ranging discretion without getting into too much detail in terms of what they want to see in this plan,” said McKay.

A major component of the area redevelopment plan will include public consultations and input from the community into the overall vision, objectives and principals of the plan.

Consultations will also seek feedback about the types of land uses permitted within the area, connectivity and integration with the surrounding neighbourhood, as well as policies and guidelines for managing heritage resources, infrastructure and the environment in the area.

Jan said she was excited to finally get started on the project.

“My husband Adam and I we are very keen to get some momentum behind the project. It’s always a surprise how long it takes to get things done and while we respect the process we’re very excited to move forward,” said Jan, who has lived with her husband in the community for the past 22 years

On March 1, 2018 the family took full control of Mount Norquay paving the way for them to potentially build a gondola from the ski area to the Banff townsite.

She said they intend to begin engaging the public within six to eight weeks to start discussing the larger vision for the site and the different components that could be included.

“My hope is that this is the beginning of a more public process, so that we can then have a series of meetings over the next six months to a year to really lay that out for the community and get their feedback,” said Jan.

While the intercept parking lot will likely help address the town’s traffic congestion problem, the ultimate goal of the project is to build a gondola from the parking lot to Norquay.

The 2010 management plan for Banff National Park allows for a feasibility study for a gondola from Mount Norquay to the Banff townsite, or in the vicinity, to be explored by the ski hill.

Council approved the terms of reference by a 4-2 vote with Coun. Peter Poole and Coun. Ted Christensen in opposition.