"It just sends a mixed message to the community that we’re not going to put dollars and money where our mouth is for enhancing the pedestrian experience, but here is $20. I hope you don’t break your neck.”
0
Feb 26, 2020 10:00 AM By: Cathy Ellis 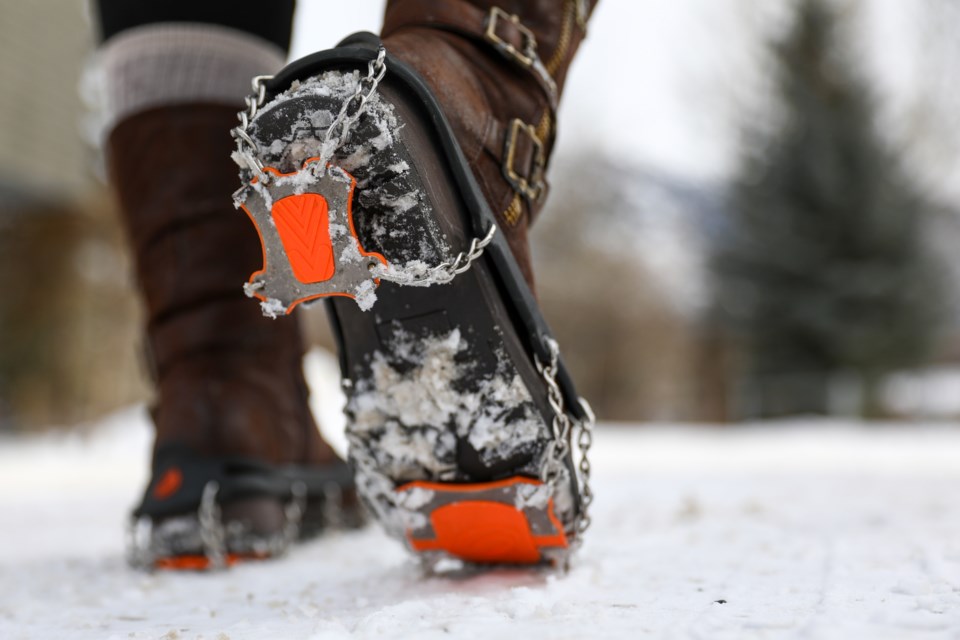 The Town of Banff council approved the allocation of the $2,000 remaining in the studded tire rebate program to provide $20 to those residents interested in purchasing urban crampons, such as yaktrax. EVAN BUHLER RMO PHOTO⁠

On Monday (Feb. 24), council voted 6-1 to allocate $2,000 remaining in the studded tire rebate program to provide $20 to those residents interested in purchasing urban crampons, such as yaktrax.

But Councillor Corrie DiManno dug in her heels, arguing that if council were serious about creating safer walking conditions, it would have supported the $110,000 budget request by administration to hire four seasonal employees to do a better job at 23 intersections.

“I’m very pro-pedestrian, extremely pro-mobility so that is why it pains me today to just not be able to support this philosophically… if we are supporting the concept that it’s currently not safe enough, or that we could be doing better on our downtown roads, sidewalks or intersections, then this is just a Band-Aid solution,” she said.

“I don’t think this gets us there… it just sends a mixed message to the community that we’re not going to put dollars and money where our mouth is for enhancing the pedestrian experience, but here is $20. I hope you don’t break your neck.”

Mayor Karen Sorensen was quick to defend her position, noting that spending $100,000 to hire four new seasonal employees to improve snow and ice removal can’t be compared to spending $2,000 on a rebate program.

She said she has had many comments from residents over the past two years following approval of the studded tire rebate program, wondering why there was no such program for people who walk.

“That being said, I am still very open in April when we see our forecasted surplus, seeing if there is a significant amount, in talking about the snow removal and the crosswalks again,” Sorensen said.

“I just couldn’t approve that based on where the current budget was sitting a few weeks ago.”

According to administration, a variety of products – which attach to footwear using straps or stretch rubber – are available with prices ranging from $10 up to $75, with the most popular models in the $30-$40 range.

Based on that cost, administration recommended a rebate amount of $20, with the program starting Feb. 24 and running until April 30. The $2,000 is coming from unspent funds from the existing tire rebate program.

Town of Banff officials say affordability for residents, particularly given the high cost of living in the tourist town, continues to be a top concern, noting that even $40 can be a challenge to some residents.

“Since almost everyone in Banff is a pedestrian for at least some of the time, the potential target population is significantly greater than for the tire rebate program,” said Michael Hay, the Town of Banff’s manager of environment and sustainability.

“Today, if we had no more studded tire rebates, this would support 100 applications.”

Coun. Ted Christensen voiced concern for international tourists as well, noting many from around the world are unfamiliar with walking on snow and ice and some of the complaints have come from visitors.

“When I’m on the beach in Australia, I don’t know too much about the water and the power of the ocean, but there are often surf guards there to help to provide some aid,” he said.

“I think when people come from a warm climate to our ice-pone streets, an additional education program would help.”

Hay said one possible option is renting urban crampons, having them available for tourists at places such as Town Hall or the Fenlands.

“Rather than a purchase program, there can be a rental options,” he said.
“If someone shows up from a warm country and goes ‘I can’t walk on this’, maybe they’ll come across a sign that says ‘stop by Town hall: welcome to use’.”

Coun. Peter Poole was quick to caution against this approach.

“If administration wants to get into the business of renting items that are already being rented at commercial businesses, I wouldn’t favour that,” he said.

The Town of Banff plans to examine its entire rebate program over the summer.