BANFF – The longtime manager of the Banff Farmers Market has lost his opportunity to run the popular Wednesday event to a competitor for this summer.
0
Mar 21, 2019 12:00 AM By: Cathy Ellis 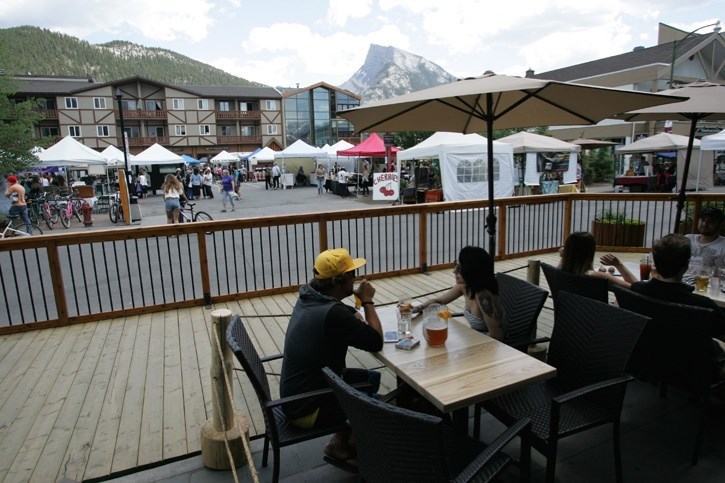 The Banff Farmers Market on Bear Street in 2017. Rene Geber, a Banff resident who founded the weekly market, was surprised to learn the contract to operate it in 2019 would be decided through a lottery system.

BANFF – The longtime manager of the Banff Farmers Market has lost his opportunity to run the popular Wednesday event to a competitor for this summer.

Operation of the market ended up being awarded through a lottery system because, for the first time in the market’s eight-year history, another applicant expressed interest in running the event for summer 2019.

Rene Geber, who started the Banff Farmers Market in 2010, said he was shocked when he saw an ad in the paper indicating that operation of the farmers market was up for grabs.

“I am completely shocked. This move totally blindsided me,” he said, adding the Town contacted him every winter to see if he was still interested in running the market the following summer.

“I have never had reason to be concerned that the market, that I founded, was in jeopardy of being given to someone else … I’m feeling so burned because I put so much love and energy into this.”

The farmers market is considered a special event in Banff, guided by policy and standards, although they are silent on what to do when there is more than one applicant for a recurring event.

Town of Banff officials say the municipality received an application from the operator of Canmore’s market in mid-December to run a market on the same dates as Geber throughout the summer.

As with other recurring special events, such as Melissa’s and the Banff Marathon, for example, they say there’s a requirement for eight months notice in advance of the event, so the Town can block the calendar.

“We hadn’t received any confirmation from the previous supplier, so we didn’t have it held in our system,” said Jason Darrah, the Town of Banff’s communications and marketing director.

“Rather than proceeding to processing the application, because Mr. Geber had shown his commitment in the past, we decided we wouldn’t do first-come, first-serve.”

Instead, the Town placed a newspaper ad in January to let the public know that applications were being accepted for operation of a farmers market.

With five complete applications by the Feb. 1 deadline, including Geber’s, they went to a lottery system.

“We did choose a process that was as fair as possible … we didn’t want to start picking and choosing businesses,” said Darrah, noting it was the same lottery process that would have been used had there been cannabis store applications within 30 metres of each other.

Geber said that never during his eight-year working relationship with the Town did he have to make his intent to operate the market the following year known eight months in advance.

He said he was surprised when he saw the ad in the paper that the Town was accepting applications, noting at the very least it should have been determined based on merit rather than a random lottery.

“I do understand there was policy, but that’s not how the Town conducted itself and I was never aware this could happen,” he said.

Since he first started the market with 20 vendors and 25 tents, Geber said he has grown it to include 78 vendors and 90 tents in the 2018 season.

He said he’s worked hard and made investments, noting it’s his love and passion for Banff that made the market what it is today – a highly anticipated weekly event for locals and visitors alike.

Geber said it’s not easy for a person to find their niche and make a decent living in Banff, adding very few of his classmates from Banff Community High School still live here, having moved to places with a lower cost of living.

“Half my income has disappeared,” he said.

Geber began writing letters to council and reaching out to a couple of individual councillors, including Councillor Corrie DiManno.

As a result of what’s happened, Coun. DiManno, said she believes council will review the policy.

She said council has been briefed and kept up to date by administration.

“I think council should have tried to foresee what would happen if more than one person applied and that wasn’t built into our policy,” she said.

“I empathise deeply with Rene, and I’m truly sorry that this has happened to him.”

Geber has made his wish to organize the market for the 2020 season clear and has already filled out the application.

He said he feels he should have the chance to win back the market.

“I could enter into a multi-year contract much like the Town of Banff has done with the canoe docks,” he said.

Darrah said that is certainly one logical option to consider, noting the Town of Canmore contracts out its market rather than treating it as a special event.