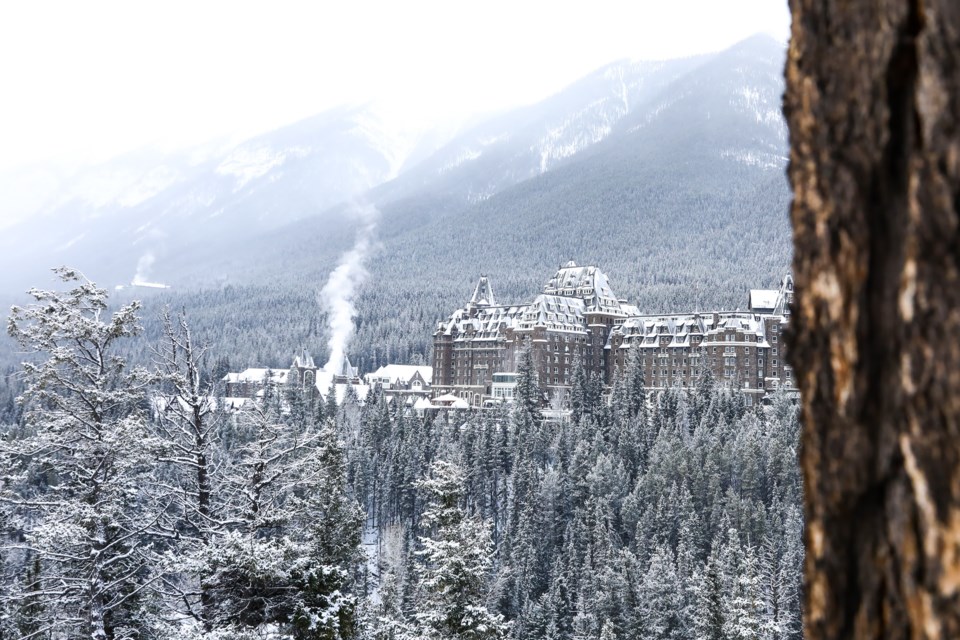 Snow falls over the Fairmont Banff Springs Hotel on Friday (Jan. 29). While hotels in Banff saw a $200 million decrease in property assessments due to COVID-19, hotels with amenities like spas and convention centres, saw a greater overall decrease. EVAN BUHLER RMO PHOTO

BANFF – The COVID-19 pandemic has led to a $200 million drop in non-residential property assessments in the tourist town, with hotels down about $176 million in value.

Non-residential assessments, including hotels, retail properties on Banff Avenue and Bear Street and industrial properties, have decreased from $1.338 billion to $1.138 billion –  a reduction of $200 million or 15 per cent.

“The total loss in values to all the hotels was $176 million this year,” said Frank Watson, an independent assessor hired by the Town of Banff, during a presentation to Banff town council on Monday (Feb. 8).

While there was an overall drop in value for hotels of about 15 per cent, Watson said higher-end hotels, with amenities such as spas, convention centres and restaurants, saw an even bigger drop.

“The impact in Jasper was not as much as the impact was in Banff, and I think that’s really because Jasper wasn’t under a full lockdown,” he said.

“But a 20 per cent reduction is pretty typical to what went on in say, Calgary.”

Watson said non-residential property values have increased over the years, with 2014 and 2015 seeing as high as 20 per cent increases each year.

But he said the last time values dropped this significantly was in 2011, to the tune of about 22 per cent.

“This is not unlike what happened during the financial crisis of 2011,” Watson said.

An income-based approach is used to determine the market value of commercial properties, which is based on the year end of June 30, 2020.

Chris Hughes, the Town of Banff’s director of corporate services, said it’s important to note, therefore, that the full impact of the COVID-19 pandemic is not considered in these assessments.

“At July 2020, we were just a few months into the COVID pandemic, so we probably had about four months of the pandemic that could be factored in these assessments,” he said.

Hughes said that leads to a lag in the financial impacts being seen.

“From 2017 to 2018 and 2018 to 2019, there were some pretty good years financially in the non-residential sectors, so that impact of those years is still being felt in these assessed values,” he said.

“The full impact of the pandemic won’t be felt until next year’s assessments are done – and even for the next couple of years.”

Watson said he predicts there will be a decrease in non-residential property values again next year.

“I don’t think it’s going to be as much of a reduction as we’re seeing this year,” he said. “I think things will level off.”

Of interest, Watson said there were three hotels that sold in Banff in 2020 during the pandemic.

“Hotels in Banff, or any property for that matter, very seldom sell,” he said, noting he believes the last sale of a hotel was Pursuit’s purchase of the Banff International Hotel in 2012.

“Certainly, to have three hotels sell during the height of COVID is very uncommon.”

On the residential side, property assessments are based on actual sales.

Residential assessments in Banff have decreased about one per cent, or about $8.25 million, from $1.902 billion to $1.893 billion.

Property assessment notices were due to be sent out on Tuesday (Feb. 9). There is a 60-day appeal period.

Hughes said there is no direct correlation between assessed values and taxation.

He said the municipal operating budget, which council passed last month with a 5.6 per cent tax decrease, plays a role, as does how a property changes in assessed value compared to the average in that sector.

“The third item is the tax rate split, which is set by the tax rate bylaw,” he said, noting that will likely come before council in late April or early May.

In addition, the Town of Banff collects taxes on behalf of the Alberta government for the education requisition. The municipality has no control over that.

“We have very little insight as to what that will be at this point; they haven’t released an education budget,” Hughes said.

“It would be a fool’s game to try to estimate what that will be this year.”