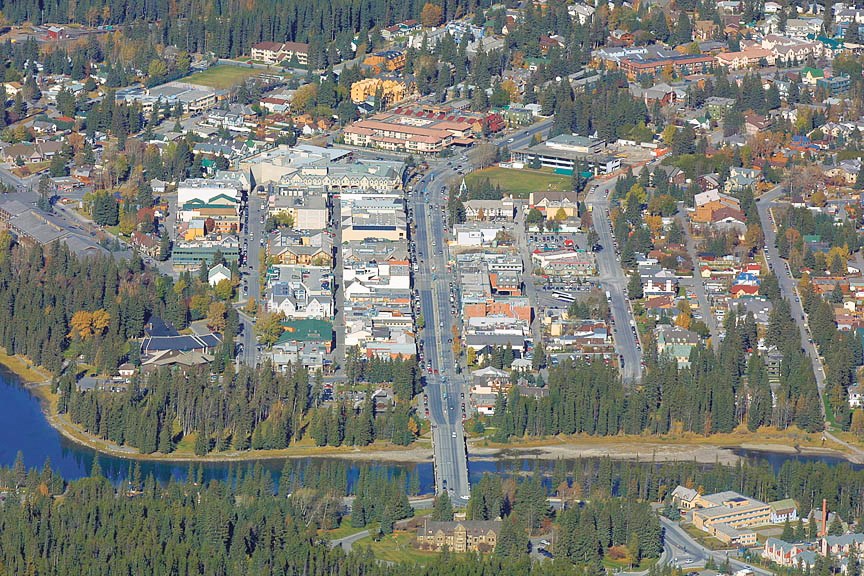 The Bow River and Banff Avenue dissect the Town of Banff as seen from the Sulphur Mountain gondola. RMO FILE PHOTO
BANFF –The number of Banff Housing Corporation homes for sale is on the rise, while sale prices are decreasing significantly at the same time.

Town of Banff officials said sales of Banff equity-share homes have been fairly static at three or four a year for many years, but there were nine sales in 2018 and this year is on track to see similar figures.

“So far in 2019, we’ve already had three and we have a number of houses on the market, so we’ll probably get to nine this year,” said Sharon Oakley, the Town of Banff’s housing sustainability coordinator. “It has been a really busy, active year.”

Councillor Corrie DiManno, a council representative on Banff Housing Corporation (BHC), said data from Banff’s community social assessment is likely a sign that people can’t afford to buy at the higher prices and homeowners are lowering their prices.

That data showed 82 per cent of the population makes less than $50,000 and that the average median family double income in Banff is $96,000.

“When you compare what we know about the average family incomes from the Banff community social assessment with the prices of BHC homes, there’s a significant gap,” DiManno said.

“As always the market is dictating this decease, but I think we’re seeing the average price to buyer reduced because of that income data and homes are selling for the price people can afford.”

BHC has built 173 family housing units for home ownership in the Middle Springs area. In addition, the BHC has also acquired 10 already-built apartment-style condominium units at Peyto Place above Nesters.

BHC has 22 price-restricted properties, including the 10 at Peyto Place, 10 units on Jasper Way and two at Fairholme Place.

The rest are under an equity-share arrangement whereby these units have been sold to residents at below-market cost through a sublease arrangement. BHC retains an equity share of the total value of the unit. Percentages of equity vary from unit to unit, ranging from 13-34 per cent ownership for the BHC and 66-87 per cent ownership for the homeowner.

BHC homes are sold to people who sign up on the registered resale list, which has about 230 individuals or families on it. Points are awarded to potential buyers based on a series of criteria, and those with the most points are contacted first when a home has been put up for sale.

Oakley said there are many reasons for selling, but said she has noticed many people who have lived in these homes for 20 years are looking to sell.

“It’s a natural evolution; people are right-sizing their homes or moving away, so that is why I think we’re starting to see some increases on the number of sales after being so flat for so long,” she said.

As for prices coming down, Oakley agrees with DiManno.

“The banks are making people qualify with the stress test and interest rates have been rising – all these factors will influence and impact what you can afford to buy and manage,” she said.

“To me that’s absolutely a deciding factor. They have only so much they can afford, so it’s up to the homeowner if they want to lower the price,” she added.

Oakley said this is one reason for moving ahead with the $8.5 million entry-level apartment development for home ownership at 338-340 Banff Ave., noting it would likely be in line with the size and prices of Peyto Place.

“It will be similar to Peyto Place,” said Oakley. “People are lining up to buy those. That price range is where it’s at.”

“We did a recent survey with Banff Housing Corporation folks that are on the registered resale list, and what we learned from that is folks are basically looking elsewhere to move to if they can’t find home ownership in Banff,” she said. “I don’t want to see this demographic leave.”

Banff investing in heating system for buildings in industrial compound
Feb 21, 2020 10:00 AM