The Town of Banff, businesses and Banff-Kananaskis MLA Miranda Rosin advocating for mass vaccinations given Banff's nature as a tourist resort.
Apr 21, 2021 4:45 PM By: Cathy Ellis 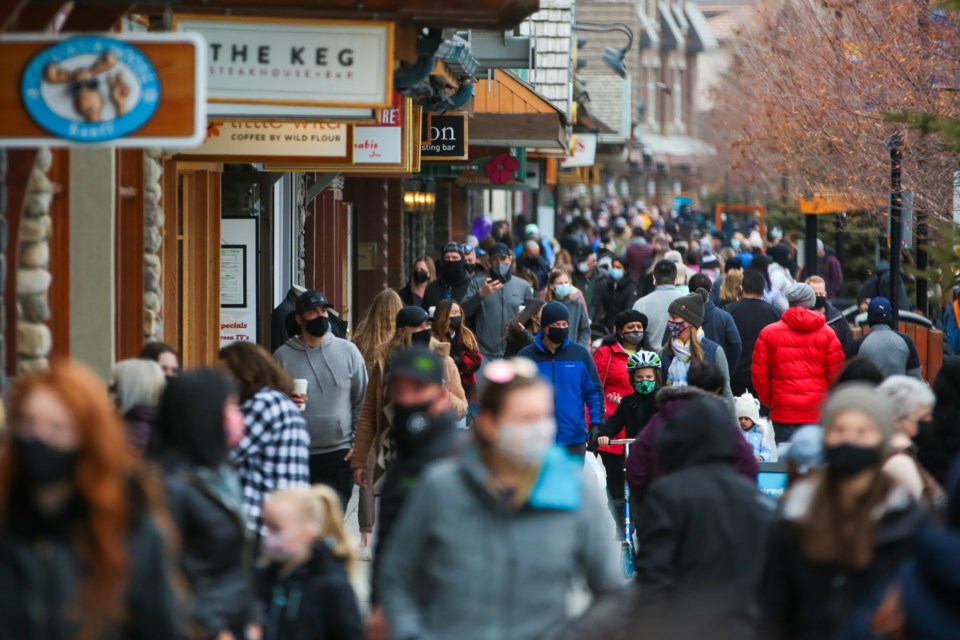 BANFF – Banff National Park is the No. 1 COVID-19 hotspot in Alberta.

With a case rate of 1,025.9 per 100,000 people compared to the provincial per capita rate of 417 –  the Banff and Lake Louise region has the highest rate per capita as of Tuesday (April 20) when active cases soared to 138 from three a month ago.

Town of Banff officials, Banff-Kananaskis MLA Miranda Rosin and local businesses are advocating for mass vaccinations for the tourist region, including a letter from Mayor Karen Sorensen and MLA Rosin to Health Minister Tyler Shandro.

“It’s important the community knows we are advocating for our unique community,” said Sorensen at a council meeting on Tuesday (April 20), noting she signed Rosin’s letter on Monday evening.

Town of Banff officials say the municipality has been advocating for months for mass vaccinations, noting the Town is ready to provide logistical support and provide facilities and hopes the province does more vaccination clinics at the Fenlands.

“We are prepared with some of our larger facilities to move to mass vaccinations should we be approved of that request,” said Town Manager Kelly Gibson. “We will be ready when the province comes forward – and hopefully soon.”

Rosin, who opposed the provincial government’s latest round of COVID-19 restrictions along with 15 other UCP MLAs, said Banff’s front-line tourism and hospitality workers deal with millions of out-of-province visitors every summer.

“With what will hopefully be a busy summer tourism season coming, there is a case to be made that these workers and all area residents are at very unique risk of contacting the COVID-19 virus compared to those living and working in non-visitor based communities,” she said.

“Local employers estimate that upwards of 80 per cent of Banff’s young hospitality workforce live in communal living, which has already proven to cause rapid transmission of the virus amongst Banff’s frontline workers.”

Officials with Alberta Health said earlier this week that there are no plans for a mass vaccination program for all Banff residents, noting the province is sticking to its vaccination rollout plan.

“With limited supply, we are focusing on those who are most at risk of severe outcomes,”  said Tom McMillan, assistant director of communications with Alberta Health.

“All Albertans, including those in Banff and Canmore, who have underlying health conditions and 40 and older can book their appointments. We are not deviating from this approach at this time.”

The province of Alberta did fast-track an application by Banff Lodging Company –which had a COVID outbreak amongst staff last month – to run an isolation facility out of the Red Carpet Inn as Banff’s quarantine spaces reached capacity.

As of April 20, 47 of 53 isolation rooms at the Red Carpet Inn, which opened on April 15, were full and the eight spaces at the Banff YWCA isolation facility were all also maxed out.

The individuals in Banff’s isolation spaces come from more than 25 different employers in the park, representing a range of hospitality, tourism and trades industries.

Just prior to last weekend, 17 people from the municipally-run isolation space at The Banff Centre were moved to the Red Carpet Inn to give the Town of Banff’s emergency social services team a break.

“We have once again put our emergency social services team on standby in the event we have to occupy any of the rooms at The Banff Centre,” said Silvio Adamo, the director of emergency management for the Town of Banff.

The province tested about 20 per cent of ski hill staff in a blitz at Sunshine and Lake Louise ski hills earlier this month and had a pop-up testing site located outside Mineral Springs Hospital for the past two weekends.

The province plans to run the pop-up testing facility again this coming weekend on April 24-25.

Adamo said that approximately 175 people were tested at the pop-up site last weekend, April 17-18, resulting in a positivity rate of 26 per cent. He added the testing last week at Alpine Medical Clinic saw a 23 per cent positivity rate.

“That is very high – almost 2.5 times the provincial positivity rate,” he said.

“COVID certainly has a strong hold on us here in the valley and we have to do everything we can to shake it loose.”

As of April 20, the Moose Hotel & Suites was the only place in Banff National Park considered an outbreak site –  based on the public reporting threshold of 10 or more cases linked to a business.

AHS declares an outbreak over when four weeks have passed since the last case was identified. The website will be updated on Friday (April 23), listing any other outbreak sites.

According to Banff Lodging Company officials, a total of 15 employees at the Moose Hotel & Suites have tested positive since March 27, with only one active case remaining in quarantine as of April 17.

“The primary cause of transmission occurred as a result of close residential living environments,” said Chris Thorburn, the company’s vice-president of operations in a news release.

Once notified of the first positive case, Thorburn said Moose Hotel & Suites continued to follow all AHS protocols, including aggressive contact tracing, which resulted in self-isolation for a number of employees.

“Management also proactively removed all remaining Moose Hotel employees from the worksite, provided rapid testing and private residence options for those awaiting test results,” he said. “A negative COVID-19 test result was required prior to any employee returning to work.”

As an additional precaution, Pacini Restaurant and the Meadow Spa were closed for a brief period over two days.

No guests of the hotel were considered to be close contacts or at risk of transmission.

“Banff Lodging Company continues to provide ongoing asymptomatic rapid testing to its 600 employees and is advocating for an immediate vaccination program for the busy resort town’s unique population,” Thorburn said.

While many of Banff’s tourism industry staff live in communal accommodation, Adamo stressed the need for isolation for those who test positive or are considered a close contact of a positive case.

“The supports are there for isolation and we’re working to expand that isolation inventory even more,” Adamo said.

“Folks need to make an effort to isolate and to not go to work if they are a close contact or they are not feeling well – and go and get tested.”

Adamo said is critical people continue to follow all COVID-19 public health orders, including no indoor social gatherings and social-distancing protocols in order to get a handle on rising cases.

“I know people are social and they need that interaction, but they have to try to show some discipline over these next several weeks if we’re going to have any chance of bending this curve down,” Adamo said.

Banff’s historical high active case count per capita was 1,386 on Nov. 29, 2020 during a serious COVID-19 surge in the community, reaching 192 active cases of the virus.

“You can see in April we’re going definitely in the wrong direction,” Adamo said.

In Canmore, there were 73 active COVID cases and 19 in the MD of Bighorn, which covers Harvie Heights, Lac Des Arcs, Exshaw and Stoney Nadoka at Morley. Baymag at Exshaw was named as an outbreak site on the province’s website on April 20.