Banff council looking at mandatory mask use in tourist town

In addition to making face coverings mandatory for indoor public spaces, a bylaw being prepared for Banff town council would mandate masks in the pedestrian zone on the 100 and 200 blocks of Banff Avenue. Research and a legal review are expected before it goes back to council for consideration.
Jul 13, 2020 6:29 PM By: Cathy Ellis 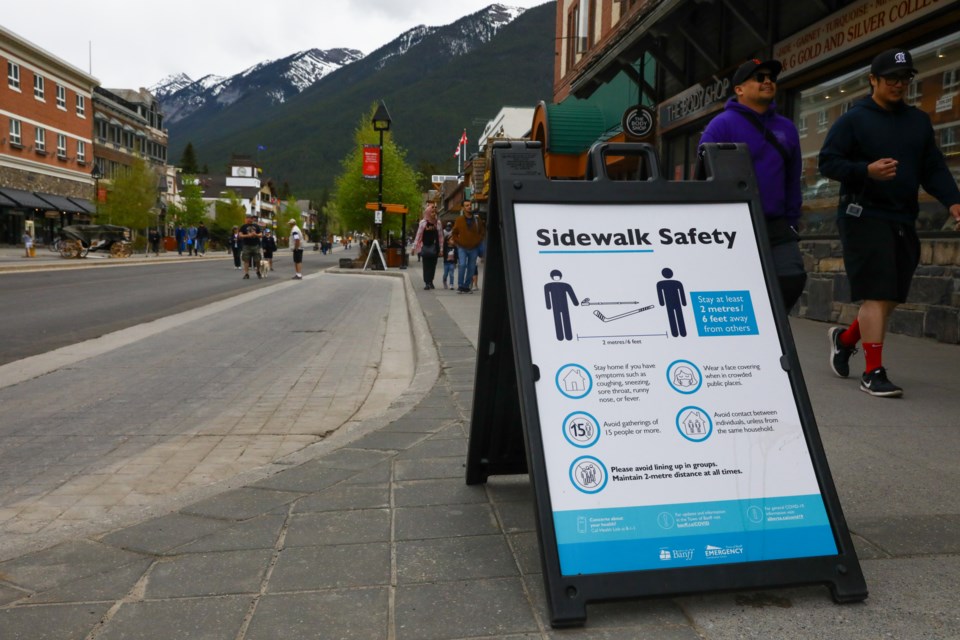 A sign along Banff Avenue reminds tourists and residents to social distance in the beginning of June. On Friday the 100 and 200 blocks of Banff Avenue and a portion of Caribou Street have been closed to vehicle traffic to make more room for people to physically distance due to COVID-19. EVAN BUHLER RMO PHOTO⁠

BANFF – The Town of Banff is drafting a bylaw to mandate use of masks to prevent the spread of COVID-19 as the tourist town continues to get busier this summer.

Specifically, the bylaw would consider mandatory masks on the 100 and 200 blocks of the Banff Avenue pedestrian zone and publicly accessible places such as grocery stores, hotels and restaurants, for example.

“The purpose is to keep Banff safe, to keep everyone safe,” said Councillor Chip Olver during a council meeting on Monday (July 13).

More and more visitors are heading to the tourist town, primarily rubber tire traffic from Calgary and the region. On Friday and Saturday, the townsite was just shy of its traffic congestion threshold of 24,000 vehicles per day.

“That’s, quite frankly, amazing,” said Darren Enns, the Town of Banff’s director of planning and development.

Council also voted to spend $53,000 to hire COVID-19 safety ambassadors to hand out masks in the 100 and 200 blocks of Banff Avenue seven days a week  after getting 100,000 masks from the province to hand out to visitors.

Last Friday and Saturday, the municipality handed out 2,700 masks to visitors in the downtown pedestrian zone.

Silvio Adamo, the director of emergency management, said people are strongly recommended to wear masks, but very few are in the pedestrian zone and other areas of the townsite.

“We’re likely seeing about five per cent uptake even on Banff Avenue on the best of days, which is a bit disheartening,” he said.

“It’s important to try to stop the spread of COVID and keep it in check so we don’t have a second wave.”

In preparing a bylaw for council’s consideration, which will include public input, the Town of Banff will seek legal advice on how to do this.

Major cities in Canada such as Toronto, Ottawa and Montreal have mandated masks. Quebec made mask wearing compulsory throughout the province.

On Monday afternoon, the City of Edmonton indicated it would seek public input on how people feel about mandatory masks in public places.

Banff Town Manager Kelly Gibson said mandating masks in public accessible spaces in Banff would be a first for Alberta – if Edmonton or Calgary doesn't go ahead as hinted – and mandating the use of masks in an outdoor environment would be the first in Canada.

He said drafting a bylaw would take a lot of research, including any legal implications on what can and can’t be done.

“It would be breaking new territory,” Gibson said.

Councillor Corrie DiManno said mandatory mask use is worth exploring and considering.

“I am wondering if this is an instance where we are blessed to be living in a bubble where we do have this false sense of safety and security because we’ve had such low cases,” she said.

“Now we’re seeing a spike in visitation and I don’t think you can be too safe. I would hate to see us get down the road into the fall and wish that we had put something like this in place.”

“We’ve all worked so hard, our community has done such a good job of keeping everyone safe,” she said. “I want to uphold that same community goal to try to remain as safe and healthy as possible, or else everyone’s good work will have been in vain.”

Councillor Peter Poole thought most businesses would support the requirement in publicly accessible places, such as restaurants, hotels and grocery stores, noting it would enhance the reputation of the community as a safe and healthy destination.

“We have a rising number of cases in the province and we don’t want those rising numbers to overwhelm us in any capacity,” he said.

Council has asked administration to bring back a bylaw for consideration as soon as possible, but administration likely will need a few weeks to do thorough research.

“This is an explosive, active situation and I’d like to move as speedily as possible,” Coun. Olver said.

As of Monday, there were an additional 86 cases of COVID-19 province-wide bringing the total active cases to 701.

During a press conference Monday, Premier Jason Kenney said not following the strongly recommended advice of public health officials can jeopardize the progress made in Alberta against the virus.

"We are not done with COVID-19, but we are learning to live with it and our future success depends entirely on not letting our guard down," Kenney said. "Masking is a crucial part of this guidance. Wearing a non-medical mask when it is difficult to maintain social distancing is one way we can all limit the spread of COVID-19."

However, the premier reiterated a previous statement by Chief Medical Officer of Health Dr. Deena Hinshaw that "we can't enforce our way out of the pandemic."

Instead of making face coverings mandatory, Kenney called on the civic duty of all Albertans to do the right thing as much as possible.

"The vast majority of Albertans don't need to be told to do the right thing," he said.