"Since Aurora’s birth we have always had to worry about one of us being exposed to a virus, but this pandemic has made it so much worse and I worry about her health and safety constantly."
Jul 30, 2020 6:00 AM By: Cathy Ellis 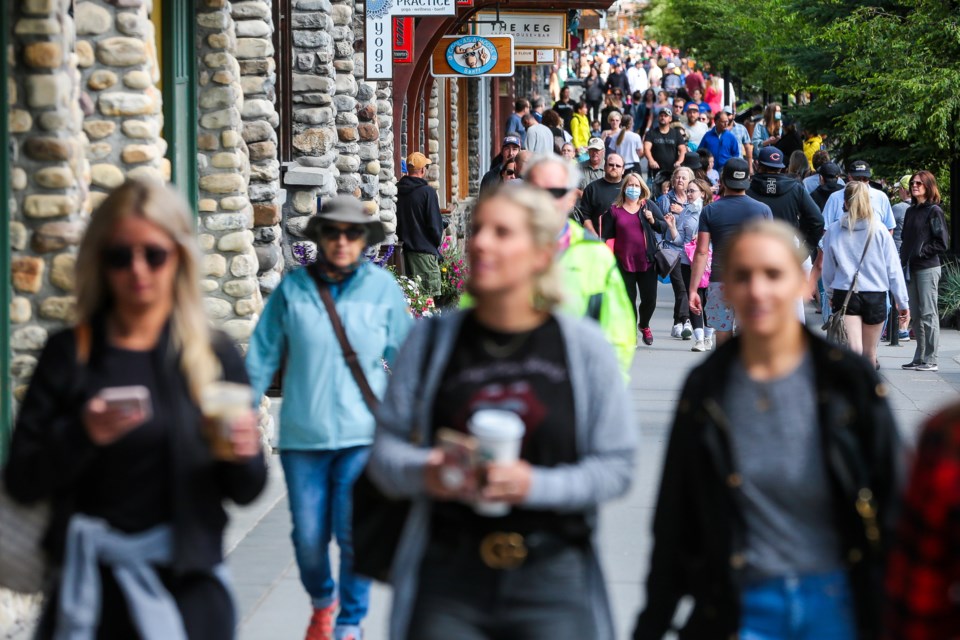 Hundreds of people walk along Banff Avenue on Saturday (July 25). The majority of people were not wearing masks. EVAN BUHLER RMO PHOTO⁠

BANFF – Hayley Beauregard’s immunocompromised three-year-old daughter has battled for her young life many times, including being on a ventilator after open-heart surgery.

Hayley said she and her daughter Aurora have been stuck in the apartment since the beginning of the COVID-19 pandemic in March because the toddler’s underlying health conditions could make her high risk for contracting the virus.

“Since Aurora’s birth, we have always had to worry about one of us being exposed to a virus, but this pandemic has made it so much worse and I worry about her health and safety constantly,” she said.

“I sadly have already seen my child on a ventilator after her open-heart surgery. I truly wish that no one else would ever have to see or experience what I had to during this time,” she added.

“She has fought so hard to be with us today, having spent 100 days in hospital in her short life and she doesn’t deserve to spend another day there.”

Hayley made her comments during a plea to Banff town council on Monday (July 27) to pass a bylaw mandating the use of masks in town, which is attracting more and more tourists as summer progresses.

Hayley pointed to beads she was wearing, which represent different obstacles Aurora has faced and overcome – a night in hospital or ICU, a needle poke, a test, or oxygen support, for example.

“I do not wish to add any more beads to this already 32-feet long chain due to something that could easily be prevented by wearing something as simple as a face mask,” she said.

“After all, if my developmentally-delayed three-year-old daughter can wear a mask, I think anyone can.”

Choking back tears, Mayor Karen Sorensen thanked Beauregard for sharing Aurora’s story and putting a face to the issue.

“That was very impactful,” said an emotional Sorensen. “If I hear of anybody who has an argument against us mandating masks in this community, I will direct them to this recording.”

Later that day, Banff town council made the unanimous decision to pass a bylaw mandating the use of masks in town following many presentations, including from two doctors, and letters of support from residents.

There was one resident who voiced opposition to the bylaw, who said he believed wearing a mask was “de-humanizing and strips away the individual humanity of each person” and adversely effects the spirit of the Banff community.

Beginning this Friday (July 31) in time for the busy August long weekend, masks must be worn in all publicly accessible buildings in Banff like grocery stores, retail shops, restaurants and hotels, as well as public vehicles such as taxis.

The mandatory mask bylaw also applies to the 100 and 200 block of Banff Avenue pedestrian zone. It is believed that Banff is the first municipality in Canada that has mandated wearing masks outside.

The Town of Banff will focus initially on education of the new bylaw, but those not wearing masks could be fined $150. Council will also review the bylaw and its effectiveness in every subsequent council meeting, and may make adjustments as needed.

Businesses are not expected to enforce this bylaw by refusing service, or forcing people to wear masks. However, the bylaw does require a business to post signage near the entrance to their establishment to indicate masks or face coverings are mandatory.

Dr. Amy Tan, a medical physician and associate professor at the University of Alberta’s department of family medicine, was one of the presenters before council deliberated the bylaw.

She said the best way to avoid the spread of COVID-19 is to socially distance and stay home when sick, but added masks are highly recommended by most health authorities now as an added protection.

She acknowledged there was mixed messaging about the effectiveness of masks earlier in the pandemic, but said there is an evolving and mounting body of evidence that shows masks help.

“Modelling has shown that if 80 per cent of a population is masking most of the time, that is enough to contain community spread.”

Mayor Sorensen said she’s disappointed the Alberta government didn't mandate masks province-wide, leaving it to communities to do the work to keep their residents safe, and in Banff’s case, visitors too.

She thanked other municipalities in the region including Calgary, which has a mandatory mask bylaw coming into effect on Aug. 1, and Canmore, which is discussing the issue at a special council meeting Aug. 4.

“I had hoped that the province would have moved forward on this mandate province-wide, but they have not done that and it does not look like they’re going to,” Sorensen said. “I think we’re sending a strong message that safety is our number one priority … I have no doubt in my mind that this is the right thing to do.”

Councillor Peter Poole, who was the first Banff councillor to raise concerns about COVID-19 back in January at the council table, voiced his worries that the number of cases continues to go up by approximately 100 each day in the province.

“We now have a situation that compares to where we were in March when we implemented the state of local emergency,” he said, noting there were 200 active cases province-wide on March 20 but were sitting at 1,430 active cases on July 27.

Coun. Chip Olver, who was the councillor to introduce the idea of a mandatory mask bylaw earlier this month, is concerned about a potential outbreak in Banff.

She points to B.C, where 86 cases have now been linked to gatherings and parties in the Kelowna area earlier in July.

“I don’t want news stories like that around us,” she said.

Coun. Olver said Banff needs to help contain the spread of the virus to protect everyone, including the most vulnerable members of the community.

“I believe that these votes today are the most monumental we have ever taken,” she said.

“It will prevent illness and possible death for the thousands of people who call Banff home and the many thousands who visit.”

Coun. Corrie DiManno said the number of people currently wearing masks on Banff Avenue is currently nowhere where it needs to be to help slow the spread of COVID-19.

“I think from the feedback we’ve heard form residents, their anxiety is palpable,” she said. “People are scared.”