Banff pedestrian bridge back on table

BANFF – A $5 million pedestrian bridge across the Bow River from Central Park to the recreation grounds may become a financial reality. Town of Banff administration will apply for $4.
0
Dec 6, 2018 12:00 AM By: Cathy Ellis 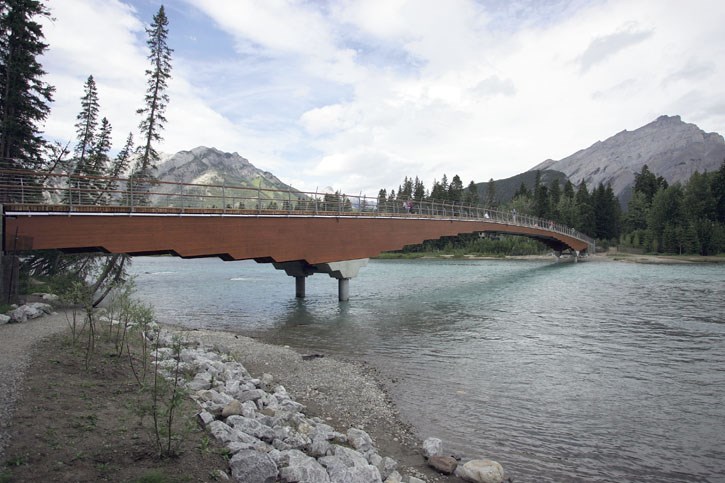 The Town of Banff is applying for provincial and federal grant funding to help pay for a second pedestrian bridge over the Bow River.

BANFF – A $5 million pedestrian bridge across the Bow River from Central Park to the recreation grounds may become a financial reality.

Town of Banff administration will apply for $4.5 million in provincial and federal funding, which if successful, would mean the municipality would pay $500,000.

“It’s a pretty awesome deal if we could get it,” said Adrian Field, the Town of Banff’s director of engineering.

“This would be a great walking connection for visitors and folks who live here, and aligns with council’s priority of promoting sustainable transportation.”

With congestion and lengthy traffic backups, particularly in summer, helping people get around the four-square-kilometre town without driving a vehicle has been an ongoing initiative in Banff.

To do this, there have been improvements to Roam transit to make it more frequent and convenient for people, leading to a 50 per cent increase in ridership in June and July to almost 259,000 passengers.

Field said increases in trail connectivity, signage improvements, bike racks and other facilities to improve the “first mile, last mile” connectivity are all essential to any successful mass transit system.

“The more people who can get out of their vehicles and enjoy walking in our town is always good news,” said Field. “A pedestrian bridge will help with that.”

Field said a bridge is a more direct route to the rec grounds, millions of dollars are being spent over 10 years for redevelopment, as well as to Cave and Basin National Historic Site.

He said it would also reduce hazards associated with winter crossing over the ice in that location, adding a pontoon will also be considered as an option.

“I look at the trail across the ice in winter and see it’s a clear desire line. It’s a nice well-worn path over the river and we’d like to provide a safe route,” he said.

The Muskrat street pedestrian bridge saw an average of 3,800 crossings per day in July and August.

“We think the Central Park ped bridge, if anything, would be even more popular and an important connection,” said Field.

Mayor Karen Sorensen said financing has been the main barrier to constructing a new pedestrian bridge.

“This has been a longtime dream of many councils gone by,” she said.

“Frankly, it’s always hard to say ‘no’ when other levels of government may contribute.”

Councillor Peter Poole voted against the move, saying he prefers a pontoon over a permanent bridge.

“It’s worth us thinking about,” he said.

No decisions on funding will be made until spring 2019, once all applications have been received and scored. If funding is approved and it gets council approval, construction would begin in 2020. It would be subject to environmental review.