BANFF – A $5 million pedestrian bridge over the Bow River connecting Banff’s Central Park to the recreation grounds is one step closer to reality after the provincial government announced $2 million for the project on March 7.
0
Mar 14, 2019 12:00 AM By: Paul Clarke 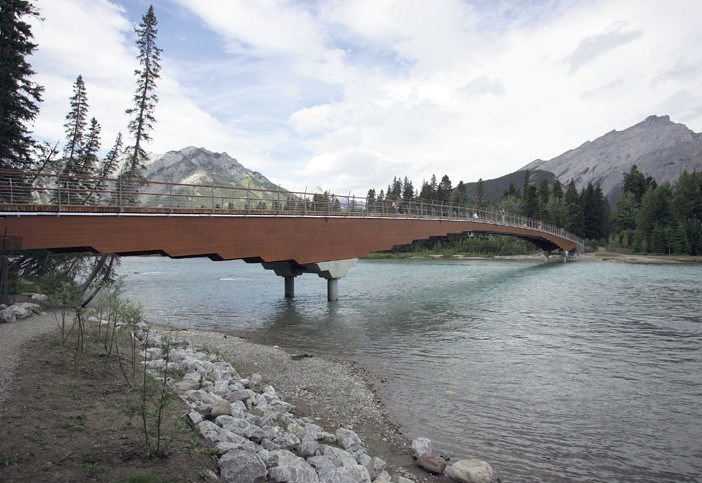 The Town of Banff pedestrian bridge over the Bow river from Central Park to the recreation grounds.

BANFF – A $5 million pedestrian bridge over the Bow River connecting Banff’s Central Park to the recreation grounds is one step closer to reality after the provincial government announced $2 million for the project on March 7.

The bridge is expected to help people get around the four-square-kilometre town either on foot or by bicycle and better connect people with Roam Transit.

Banff Mayor Karen Sorensen described the funding announcement as an “exciting first step,” but said more funding from the federal government will be needed before the bridge can be built.

“There is more money that needs to come forward and council will have to make decisions based on what we learn from the federal grant that we’ve applied for,” said Sorensen, adding she expects the federal government to make a decision on its grant application by the summer.

In December administration said it was seeking $4.5 million in provincial and federal funding for the bridge, which if successful, would mean the municipality would pay $500,000.

The bridge is part of a larger push by the Town of Banff to reduce traffic congestion, particularly in the busy summer months.

“We’re projecting 5,000 to 8,000 crossings a day in the summer and the intention is if people can get from point A to point B easier over this bridge then they will be less likely to take a vehicle,” said Sorensen.

The Muskrat Street pedestrian bridge, which opened in 2013, saw an average of 3,800 crossings per day in July and August.

According to the mayor, the bridge has been on the community’s radar for more than three decades, however the lack of financial support from higher levels of government has made it cost prohibitive.

If the bridge is built, it will create a more direct route from downtown to the rec grounds, which are undergoing a multi-million dollar 10-year redevelopment plan. It will also help people get to the Cave and Basin National Historic Site and improve safety in the winter months when people cross the frozen river.

In December administration said it was open to the idea of installing a pontoon bridge, an idea that Coun. Peter Poole said he preferred when he voted against a motion to direct administration to apply for funding.

He reiterated his support to look at additional bridge designs during a telephone interview on March 12.

“It’s always good to look at another option,” said Poole, explaining he’s concerned a fixed pedestrian bridge could hurt the view from the Bow River Bridge, which was designated as a municipal heritage resource in 2016.

“As a guy who studied civil engineering there are a lot of fixed bridges that I love, but I think we need to think about it first.”

If enough funding is secured and council approves the project, construction is expected to start in 2020. It would also be subject to an environmental review.

Funding for the bridge is part of $215 million over four years from the Alberta Community Transit Fund.