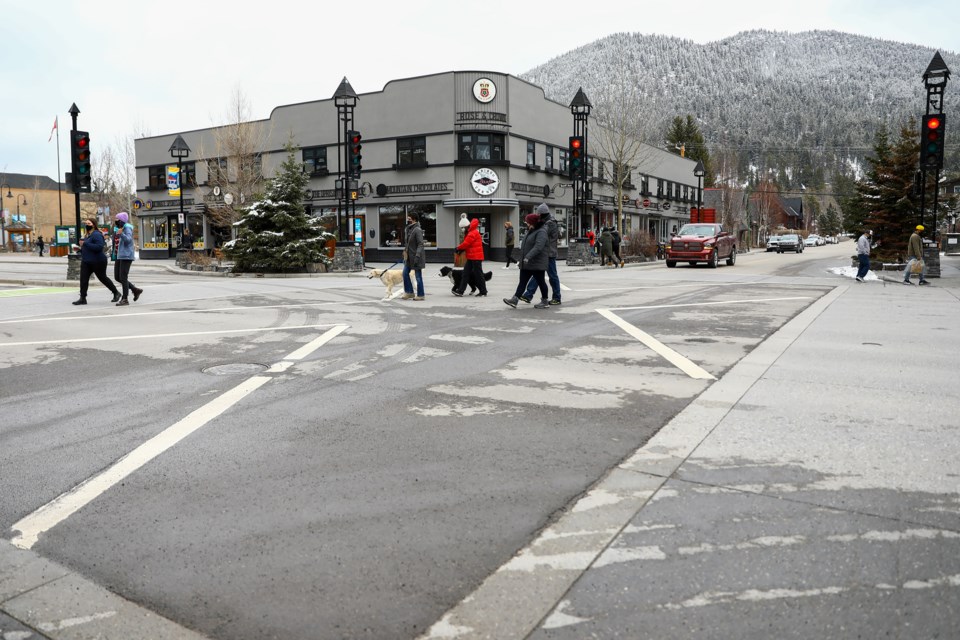 Dr. Selvanandan, like many other residents, called on the Town of Banff to discourage non-essential travel by residents out of the community and visitors into the community.

“Municipal governments can mitigate shortfalls in provincial measures by using tools and regulations within their power to reduce local COVID-19 infections,” she said in a letter to council.

“Last year, for example, the Town of Banff introduced a masking bylaw well ahead of the province.”

On Monday (May 3), Banff town council met to discuss the latest COVID-19 information provided for the Banff and Lake Louise region, which had 114 active COVID-19 cases identified on Monday afternoon.

Council went in-camera under the Freedom of Information and Protection of Privacy Act (FOIPP) for just shy of 1.5 hours to get advice from officials on a variety of topics.

Following the closed-door discussion, council decided to reconvene the meeting at 1:30 p.m. on Tuesday (May 4) in order to get additional information on several fronts.

Council also wanted to hear what the provincial government plans to do in terms of additional restrictions to be announced May 3. Alberta now leads the country and the United States with the most active COVID-19 cases per capita. There are 23,608 active cases in the province.

Mayor Karen Sorensen said council received some useful information during the in-camera session about case counts and contact tracing in the Banff and Lake Louise region.

“The information was preliminary at this time and we’re looking to the heath authority for verification as to what of that information we can in fact release,” she said. “We also discussed legal advice relating to potential municipal actions that are available to us.”

Another local physician, Dr. Nancy Blaney, who retired from the Bear Street Physicians but came back to do a locum this past month, said their office spent hours on the phone reaching out to people who had tested positive for COVID-19 positive.

She said bout 40 per cent of the positive cases in the Bow Valley did not have a family doctor, noting the stories being shared were “mind-blowing, but not new or surprising.”

“These were largely people 20-35 years old in the service industry identifying being exposed at work, then returning to their home with up to six people living together,” she said in a letter to council.

“By and large they were informed, compliant and doing their best. The isolation hotels were a great thing and undoubtedly mitigated a bigger disaster. I applaud the Banff Centre, the Y, and Banff Lodging for stepping up.”

When Banff peaked at just over 1,200 active cases per 100,000 in April, he said it was not only the COVID-19 hotspot in Alberta, but also in Canada and the United States.

“Every time things start to improve a little bit, we just take our foot off the gas and it all comes back again,” Michel said.

“I really think that we need to have a complete circuit-breaker, whatever we want to call it, just get this under control for once and for all” he added.

“The data has showed us clearly that actual case numbers are a magnitude higher than what are officially being reported.”

Believing the provincial government has failed Albertans during the pandemic, Michel called on the municipality to lobby the Alberta government for additional measures.

He also called on the Town of Banff to stop sending out communications welcoming people to Banff, noting recreational tourism is not essential travel as defined by many other jurisdictions.

“I think we need to stop producing media lines that say things like ‘at this time people are still able to visit Banff,’ or ‘we recognize that many people consider coming to the mountains as essential travel for their mental health,’ ” Michel said. “In my view, simply put: visiting Banff right now is not essential.”

At the same time, Michel and other residents are calling on council to implement check-stops again at both entrances to the townsite, asking people to turn around and go home.

“I think that needs to happen immediately, and concurrent with your continued excellent efforts to lobby for a widespread vaccination program in our town,” Michel said.

Town of Banff officials say check-stops were implemented at the start of the pandemic in March and April 2020 when the municipality declared a state of local emergency.

They say the main driver for that was Alberta was essentially under a lockdown, with nothing but essential services operating province-wide and a strong recommendation from the provincial government against non-essential travel.

“Currently, we are in a different situation,” said Silvio Adamo, the director of emergency management for the Town of Banff.

Adamo said the municipality has the ability to exercise certain extraordinary powers when necessary, but it’s difficult to take measures in isolation from the rest of the province.

“Whatever actions we take at this point that are different than the direction of the entire province just may push the issue downstream,” he said.

“I recognize that Canmore 20 minutes away would feel the impact of us turning people away.”

Councillor Peter Poole called for further discussion on additional measures the Town of Banff should be taking based on feedback from residents, including the two local doctors.

“Let’s go into camera and talk about these in orderly manner,” he said.

Mayor Sorensen said Banff also faces a situation whereby residents are continually leaving the community for a number of reasons.

“That’s the other side of the coin that we don’t hear about from residents, is stopping our local residents from leaving town,” she said. “I think that’s an interesting point to be made.”

With Monday’s numbers dropping to 114 active COVID-19 cases, Adamo said it was encouraging to see the downward trend.

By Monday, Banff’s active COVID per capita case count was ninth in the province, with a rate of 847.5 active cases per 100,000.

However, Adamo stressed extreme caution and for everyone to continue following all provincial health measures.

“It is very encouraging to see our numbers plateauing and drop slightly, but we would like to caution our community that we are not out of the woods yet,” he said.

“We’re still seeing new cases daily, which means the virus is still in our community and spreading.”

Currently, there are 13 people in nine of the 53 isolation rooms provided by Banff Lodging Company at the Red Carpet Inn.

The Banff Lodging Company has also been approved for an additional 65 rooms at another hotel.

“If the need arises, this now gives us access to 145 isolation rooms,” said Adamo.

“If needed, we can reactive the 20 rooms at The Banff Centre and the eight rooms at the YWCA.”

As far as COVID-19 testing goes, Alberta Health Services has confirmed the pop-up testing site at Mineral Springs Hospital will operate seven days a week in May and into early June, conducting about 100 tests per day.

Adamo said the Town was unable to obtain the positivity rate from the 752 tests conducted last week.

“But Alpine Medical, that conducted 105 of those 752 tests, shared with us a positivity rate of 13 per cent. As a comparison, the current seven-day provincial rate sits at approximately 11 per cent,” he said.

“This is very encouraging to see that our positivity rate is starting to realign with the province’s, because it was quite high over the past several weeks, which is also potentially an indicator for us.”