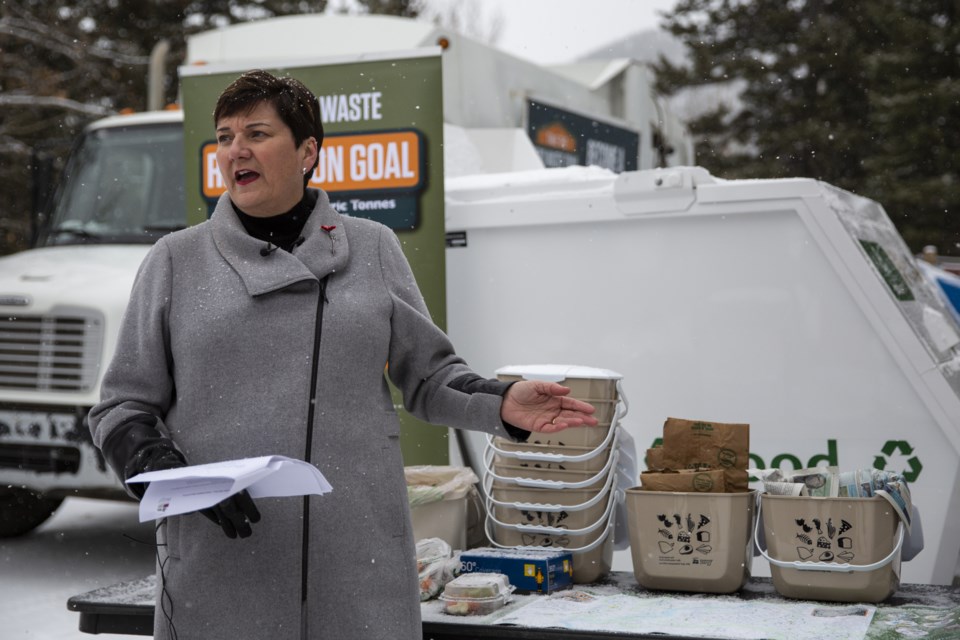 BANFF – The Town of Banff is rolling out more residential food bins to cut down on waste going to the dump.

Residents of the mountain town can’t use backyard composting because it would attract wildlife like hungry bears to town in search of an easy meal. So 63 bear-proof bins will be installed over the next two years to make it easier for residents to sort food for composting.

Town of Banff officials say this is one more step in the big picture Zero Waste Trail initiative to scale back the amount of garbage and organic waste going to landfill – by 70 per cent by 2028 and ultimately none by 2050.

“People generally want to do the right thing, and if you can make it convenient and easy for people, they will do it,” said Mayor Karen Sorensen during the unveiling of a new bin at Rocky Mountain Housing Cooperative on Tuesday (Nov. 5).

As part of a $1 million plan, several bins have already been installed in various neighbourhoods, such as Beaver Street recycling depot, Hawk Avenue, Cave Avenue, Middle Springs Drive, Squirrel and Rabbit intersection and Jasper Way. By the end of this week, there will be 16 bins.

For the municipality to reach its milestone of 70 per cent waste diversion by 2028, it means diverting 1,500 metric tonnes of food waste going to the landfill a year – that’s enough to fill 21 NHL-size hockey rinks every year.

Currently, 38 per cent of all waste from Banff is recycled and diverted from the landfill. Of that, 28 per cent is food waste going to composting.

“What we know is that food waste in the landfill doesn’t break down,” she said, noting about 20 per cent of Canada's methane emissions come from landfills.

“It takes up valuable space while still emitting greenhouse gases, which are contributing to climate change.”

Like other garbage bins throughout the Banff townsite, the food waste bins are bear-proof.

Sorensen said one of the Town’s top priorities is protecting the environment, which also means protecting wildlife.

“Almost 40 years ago in 1980, it was really common for visitors to see bears at our local dump,” she said.

“We were just throwing everything into landfill at the time and, of course, bears were regular visitors to town.”

That all changed in 1980 when four men who were going fishing were mauled by a grizzly bear, leaving one dead.

It was then that Parks Canada changed the way garbage was managed in Banff and bear-proof bins were created.

“It was a simple and effective mechanism and has really remained unchanged for 40 years,” said Sorensen. “But what has changed is our waste management techniques and how we want to sort our waste.”

As part of the rollout of the residential food waste bins, the Town of Banff is giving away free kitchen catchers for food scraps to the first 1,000 residents who visit Town Hall on Thursday and Friday (Nov. 7-8).

The goal is to make it easier for people to sort their food before taking it to the new neighbourhood bins.

From there, the food waste is screened and taken to the Stoney Soil Products Compost facility near Olds to be turned into an agricultural soil amendment.

Bitz said it’s important that residents take note of what can and can’t go in the bins, noting plastic bags are a big contaminant.

“Pretty much everything that was once alive can go in,” she said, giving the thumbs up to meats, bones, fruit and vegetable scraps, dairy products as examples.

“Generally speaking people are doing a really good job, but the other day I looked in and saw a beer can.”