BANFF – The Town of Banff is seeking public input on a new comprehensive parking management plan for the busy resort town, which includes paid parking and a residential parking permit system.
Jun 13, 2019 12:00 AM By: Tanya Foubert 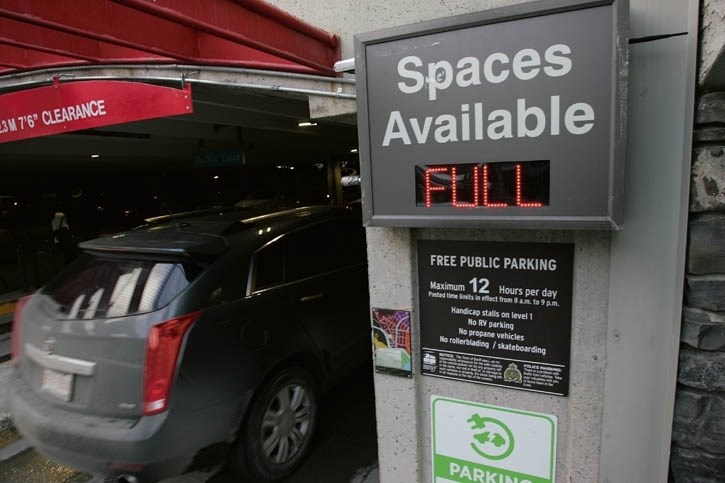 Paid parking and a residential parking permit system are under consideration to ease parking pressures in the tourist town.

BANFF – The Town of Banff is seeking public input on a new comprehensive parking management plan for the busy resort town, which includes paid parking and a residential parking
permit system.

Residents voted against paid parking in a 2017 plebiscite, but last October council directed administration to develop a new plan to manage downtown parking and address spillover into residential streets that occurs when Banff is busy.

Mayor Karen Sorensen said the newly proposed plans for user-pay parking combined with a residential permit system are significantly different to what was being considered by council in 2014 when a paid parking trial was conducted.

“There have been a lot of game changers on this topic since our paid parking trial in 2014 and, frankly, since the plebiscite question during the 2017 municipal election,” Sorensen said at a council meeting Monday (June 10).

“Our visitation continues to grow and transit has truly become an option for people to now travel around Banff and the park.”

Under the proposal, user paid parking would be implemented May 1 to Oct. 31, seven days a week from 11 a.m. to 8 p.m. for a price of $3 an hour, while eight hour parking in local parkades would be free. Licence plate recognition technology would be used to enforce the system’s rules.

Councillor Chip Olver said there needs to be extensive community consultation on what is being proposed in order to move forward with the plan.

“For me, there has to be strong consultation,” Olver said.

Council voted unanimously on Monday to direct administration to consult with Banff residents and businesses on the new plan.

The paid parking system being contemplated would allow residents the first 30 minutes of parking free to allow for errands and short-term trips. The system would also encourage commuters to park outside the downtown core and either walk or use transit to get to work.

With increased Roam Transit in the community and the expectation that a 500-stall private parking lot will open at the Banff Train Station in July, council expressed support for considering a new paid parking plan at this time.

“I believe we have a resource to help us pay for our parking infrastructure in town and they are called visitors,” said the mayor. “I am glad to see this in front of us again.”

It would also be accompanied by a residential parking permit system.

The objective is to reduce parking pressures in residential areas and keep residential parking the priority in those areas by deterring visitors and commuters using those spots. Residents would apply each year for a permit to park along their street, which would cost a $50 administrative fee. Guest passes would also be available at no charge.

Coun. Corrie DiManno said the two systems together are what will help address the issue of traffic, congestion and parking for the community.

“The relationship between the two is what will make them successful,” DiManno said, adding Banff cannot build its way out of its parking problem. “I really want the community to go into this discussion with the lens that something has got to give.”

If the community doesn’t support the plan, Banff’s elected officials have a backup. Council was briefed on the potential for a congestion charge for the downtown core at its meeting as well.

Sorensen said it was good information to receive, but she would only consider implementing a congestion charge for the community if the comprehensive parking management plan doesn’t move forward.

Director of engineering Adrian Field told council that a significant amount of data has been gathered on who is parking where, for how long and for what reason on Banff’s streets.

“I do not know of a community in North America that is better informed on parking,” Field said, adding since 2014 more than 60,000 licence plates have been recorded as part of the effort.

“We like to keep parking below 85 per cent,” he said, adding the data shows peak daytime parking occupancy in Banff exceeds 86 per cent for the majority of streets in the downtown core and adjacent residential areas.

Residential on-street parking demand was also calculated and observed for the report to council.

Field said some residential streets have fewer private parking stalls than there are vehicles, which means spillover into on-street parking occurs.

Some streets were calculated to have less parking occupancy on-street, however when usage was observed, they exceeded the 85 per cent threshold.

A sticking point for council, and in particular Mayor Sorensen, was the fact that some residents in the community are not using their off-street parking stalls and are instead parking on the street.

In particular, noted the mayor, are garages for private residents, that were approved for parking, but are being used to store stuff instead.

“We want residents to use off-street parking,” Sorensen said. “If you have your garage full of stuff and you can’t put your car in it, that is not my problem,” she said.

“If you have a huge motorhome and you have not figured out where to put it, that is not my problem.”

Residents to get three hours of free parking under new paid parking proposal
Oct 23, 2020 10:00 AM

Low survival rate for Banff wolves due to hunting and trapping outside park boundaries
Oct 23, 2020 7:00 AM