“The effects of noise, especially loud and periodic ones like train whistles, can actually be perceived by animals as a threat, and this can initiate a flight or fight response and cause stress and cause an animal to avoid an area altogether.”
May 13, 2021 7:26 AM By: Cathy Ellis 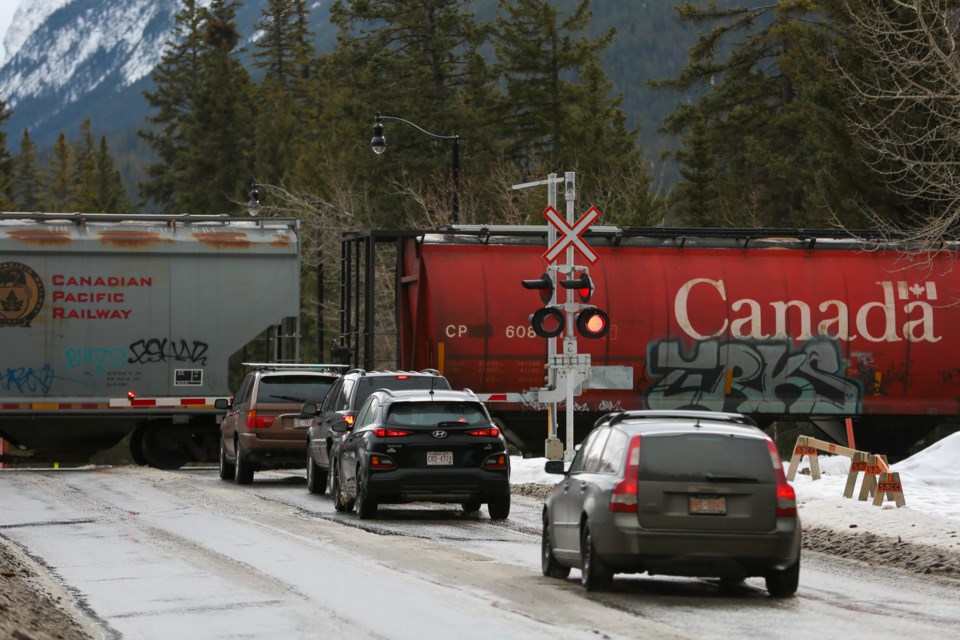 BANFF – A proposal to stop trains blasting their whistles through the Banff townsite is still on track.

On Monday (May 10), council voted 5-1 to consult with Transport Canada on the feasibility of creating a quiet zone along the railway corridor near the Banff townsite.

Councillor Peter Poole, who put forward the motion following a campaign led by resident and wildlife scientist Tony Clevenger to stop the train horn, said initially he wasn’t sure if this was actually a big issue.

“In the course of my learning about the harm to both humans and to wildlife, I’ve adjusted my thinking on this,” he said.

“I now am more firmly interested in doing what we can do as a Town.”

The procedure for stopping train whistles is outlined in the Transport Canada Railway Safety Act. One of the first steps involves the municipality consulting with the railway company on whether the request is feasible.

An assessment determines whether or not the area meets whistle cessation safety requirements, and the municipality and railway company may hire a professional engineer to help complete the study.

Currently, there are about 24 trains on average passing on the Canadian Pacific Railway line through Banff every day –  at all times of the day and night – which equates to about 200 horn blasts per day.

Resident Harvey Locke has joined many other residents, including seniors who live at Mount Edith House which backs onto the train tracks, calling on council to put the wheels in motion to stop the train whistle.

Locke, who lives on Rabbit Street, said the train noise used to be background noise, but now the once relatively quiet neighbourhood is dominated by the noise of the train, and the whistle in particular.

“It’s become really, really loud and invasive and it’s a function of the trees being gone and a hard surface parking lot sending the noise right across to us,” he said, in reference to Liricon’s 500-stall parking lot at the train station.

“We need something to mitigate this noise please, and asking CPR to stop blowing their whistle in town would be a really big start on that.”

Rachel Buxton, a professor at Ottawa’s Carleton University who specializes in soundscape ecology and previously advised the U.S. National Park Service as an expert consultant on noise pollution effects on wildlife and human health, said there is a wealth of research from around the world in this field.

In terms of wildlife, Buxton said noise like loud train horns can cover up important sounds that animals rely on to survive.

“This can include covering up the sound of an approaching predator, for example, meaning that noise can mean the difference between life and death for many different species,” she told council.

“The effects of noise, especially loud and periodic ones like train whistles, can actually be perceived by animals as a threat, and this can initiate a flight or fight response and cause stress, and cause an animal to avoid an area altogether.”

Evolution has programmed humans to be aware of sounds as possible sources of danger.

“Noise can also cause annoyance, which may not sound as serious, but responses range from depression and anxiety to agitation and exhaustion,” she said.

Mayor Karen Sorensen remained unconvinced and was the only member of council to vote against moving ahead with the proposal to consider a feasibility study to cease the train whistle.

She said this is not the time, in the midst of the COVID-19 pandemic, to be adding a greater workload to an overburdened Town of Banff staff whose schedules are packed.

On top of that, she said many residents love the sound of the train whistle, adding a new Facebook Page called Please Keep the Train Whistle in Banff has 191 members and 281 likes.

“While social media is certainly not an official source of feedback for council, I actually did follow this topic quite closely on social media.”

Councillor Brian Standish was quick to voice his support for considering a feasibility study, also taking a swipe at Mayor Sorensen.

“This council prides itself on basing our decisions on fact, not social media likes,” he said.

“We’ve heard from three scientists today who strongly support this initiative, so I definitely will support Coun. Poole’s motion.”

Councillor Chip Olver questioned whether fencing would be required, noting it could impact wildlife movement through the corridor and impact the trail used by residents to get from the industrial compound to the townsite.

“I wondered … whether it’s an underground passage or an overpass and if that would be a pre-condition of any whistle cessation,” she said.

Town of Banff officials say it is their preliminary understanding that a fence would be required or access blocked to the illegal trail between the compound and townsite.

If a fence was required, Parks Canada would need to be involved in discussions because of wildlife movement issues.

Following talks with CP Railway, municipal officials say a pedestrian overpass to facilitate travel between the compound and the town is the feasible option over an underpass.

“We’ve identified an alignment … working with CP on pricing and feasibility of the structure,” said Adrian Field, the Town of Banff’s engineering director.