“I’ve got to say, for the most part, Banff residents have been really good at following the rules, but we still are receiving the occasional complaint."
0
Mar 31, 2020 12:00 PM By: Cathy Ellis 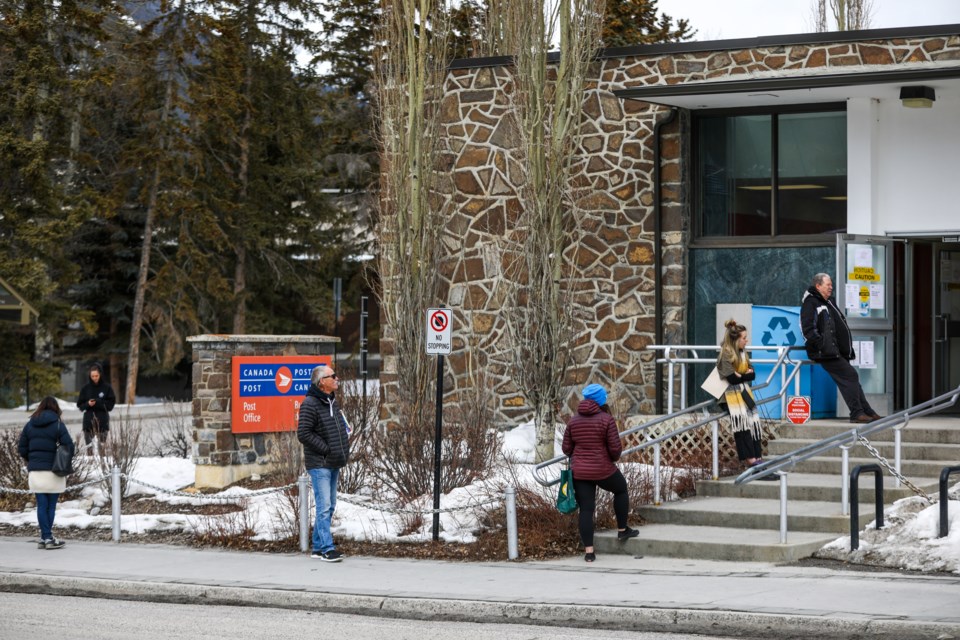 People practice social distancing to help stop the spread of COVID-19 while lining up to enter the post office in Banff on Friday (March 27). EVAN BUHLER RMO PHOTO⁠

BANFF – Banff’s bylaw officers will patrol key areas in town where people are known to gather in larger groups in a bid to enforce the provincial government’s rules to keep people safe during the COVID-19 pandemic.

As of March 25, law enforcement agencies, including municipal peace officers, were granted full authority to fine people for violating Alberta’s public health orders, including a ban on gatherings of more than 15 people and ensuring people obey two metres of social distancing.

Town of Banff officials say they have been educating people about the importance of social distancing, as well as doing patrols, since Banff declared a state of local emergency on March 17.

“I’ve got to say, for the most part, Banff residents have been really good at following the rules, but we still are receiving the occasional complaint,” said Silvio Adamo, the Town’s fire chief and director of emergency operations.

“We’ve used the approach of education to this point, and I think we’ll always default to education when encountering issues, but if necessary, if folks are non-complying, then we can use this new violation system.”

New measures announced by the province last week include prohibiting people from attending gatherings of more than 15, down from the previous maximum gathering size of 50 people. Social distancing of two metres is mandated.

This includes open spaces such as trails, fields and parks and public and private gatherings where people are brought together in a single room or space at the same time, including funerals, weddings and other formal and informal events.

Under the new powers granted to law enforcement authorities, fines now administered through tickets for violating an order have increased from up to $100 per day to a prescribed fine of $1,000 per occurrence.

Courts will also have increased powers to administer fines of up to $100,000 for a first offence and up to $500,000 for a subsequent offence for more serious violations.

Doug Schweitzer, Minister of Justice and Solicitor General, said the chief medical officer of health has the full cooperation of community peace officers and local policing to ensure Albertans comply with orders.

“Albertans’ health is and will always be our top priority, and we will use all necessary enforcement measures to ensure Albertans take this situation seriously by self-isolating and limiting mass gatherings,” he said in a news release.

Under its state of local emergency, the Town of Banff has worked to develop an enforcement security branch in cooperation with the RCMP.

“What we’ve done is to enhance our visibility and so our municipal enforcement employees are out and patrolling more often,” said Adamo.

“Those are two of the biggest venues that we see,” said Adamo.

“We’re trying to be as comprehensive as we can with the resources we we have. Our peace officers and RCMP are obviously patrolling the entire community with focus on those hot spots.”

Some estimates suggest up to 85 per cent of the tourist town’s workforce have been laid off.

With the layoffs and with those staying in town, authorities expect to see some ‘letting off steam’.

“We want to make sure it doesn’t get out hand as alcohol sometimes blurs decision-making,” said Adamo. “We have to educate so people are doing the right thing.”