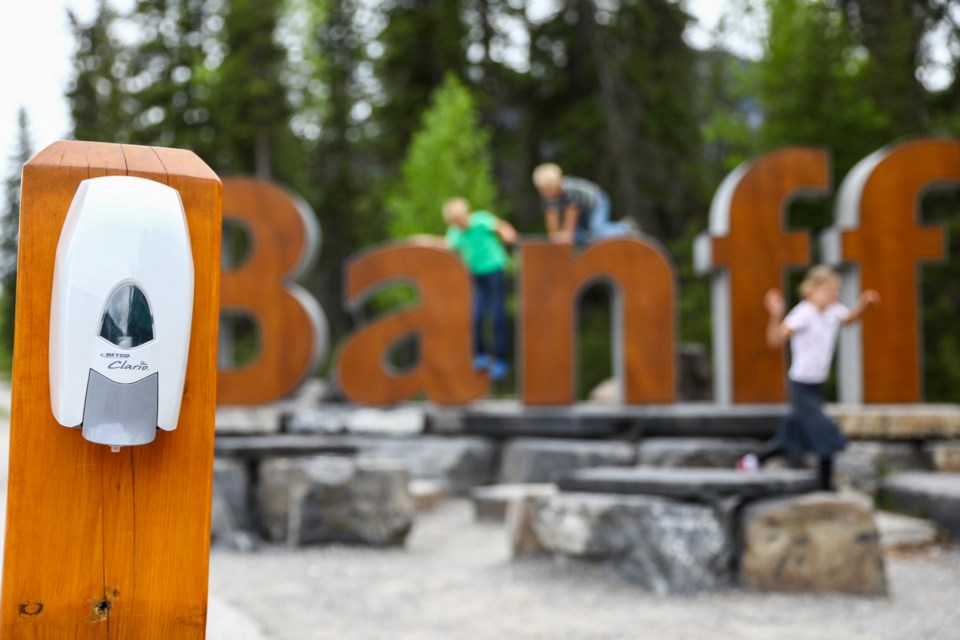 BANFF – A proposal to relocate the popular Banff welcome sign is off the table.

On Tuesday (Sept.8), council voted 4-2 against moving the entrance sign on Norquay Road to a location in town, instead opting to look at ways to improve safety at the site where people run back and forth across the busy road and randomly park cars.

Some councillors expressed concern about the cost of relocating the sign, which could be in the neighbourhood of $200,000 to $250,000 depending on the chosen location – Banff Avenue Square, Central Park or the Banff recreation grounds.

“There’s nothing wrong with that sign. It’s perfect where it is,” said Councillor Brian Standish.

Installed in 2017, the Banff sign has become a very popular attraction, where visitors stop for photo opportunities upon arrival to the world famous tourist town.

Between 2017-19, changes were made to the site to help better manage the area, which sees visitors criss-crossing the road and randomly parking vehicles, creating dangerous conditions.

These included changes to the location, size and number of planters in the median and  other signage and road marking changes to slow down traffic and improve pedestrian safety, as well as improvements to the pedestrian crossing.

In response to continuing traffic chaos, video monitoring of the area by Town staff concluded that almost 90 per cent of the backups to the highway were caused by trains blocking the Norquay road and not the visitors stopping at the sign.

Based on direction from council last year, administration looked at three possible locations for potentially relocating the sign, and recommended Banff Avenue Square on the 200 block of Banff Avenue, the site of a former gas station since remediated.

It was created by Parks Canada as an interim open space following the adoption of the 1998 Banff Community Plan, the agency’s long-term plan was to redevelop the site and other neighbouring lots into an environmental education and interpretive centre.

While councillors Standish, Grant Canning, Ted Christensen and Peter Poole voted in favour of keeping the sign where it was, Mayor Karen Sorensen and Councillor Corrie DiManno wanted to explore the Banff Avenue Square option.

“I am happy where it is currently and how it works. I think it’s such a success and it’s a really cool feature when you come into town,” said Coun. DiManno.

“That being said, I think we have an opportunity to reimagine what that area in our downtown core would look like.”

Acknowledging there is a price tag to relocate the sign, Coun. DiManno said she was prepared to consider that at 2021 service review, which is scheduled to kick off later this year.

“As we look at all projects that have been deleted from this year and potentially rescheduled for next year and beyond, I think it will be really interesting to see where something like this falls,” she said.

“Is this a nice-to-have or a need-to-have … I guess it’s hard for me to go ahead and put it aside when I don’t know what the bigger picture looks like in service review, so I am open to looking at this at service review.”

Darren Enns, the Town of Banff’s director of planning and development, said the location of the welcoming sign could be an emergent issue in future in relation to a wildlife corridor on the north side of the train tracks.

“That’s something Parks Canada has raised with us, although it’s been a larger conversation on the railway lands ARP (area redevelopment plan) and activity on the north side of the tracks as opposed to a singular conversation about the sign itself,” he said.

“If we get any other information from Parks Canada on the significance of that, we would certainly return to you with some additional context, vis-a-vis the wildlife corridor.”