BANFF – People walking their dogs off leash in the national park townsite are more likely to get caught now that bylaw officers plan to start enforcement patrols.
Dec 27, 2018 12:00 AM By: Cathy Ellis 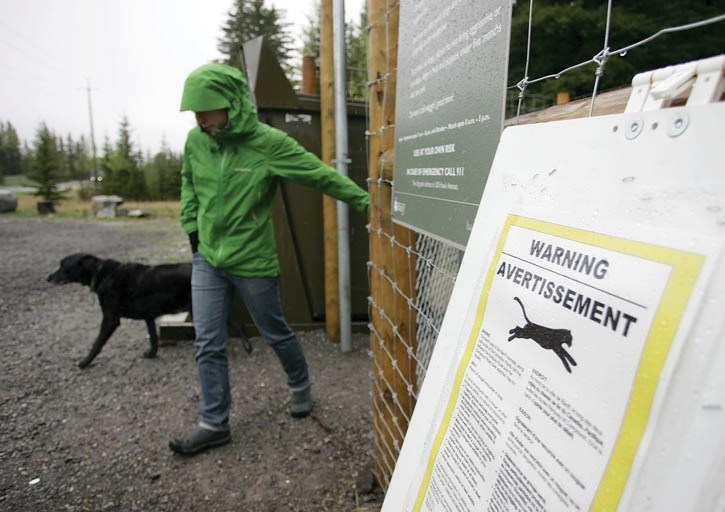 A Cougar warning in 2013 alerts users of the Banff off-leash dog area of a cougar in the area. Banff town council voted in December to direct bylaw peace officers to enforce off-leash dog regulations in the community. The direction came as a result of the human-wildlife coexistence taskforce concluded off-leash dogs were an issue.

BANFF – People walking their dogs off leash in the national park townsite are more likely to get caught now that bylaw officers plan to start enforcement patrols.

On a 5-2 vote last week, council told the bylaw services department to do proactive enforcement in specific locations looking for off-leash dogs, which the human-wildlife coexistence taskforce concluded is a problem in the Bow Valley.

Town of Banff officials say complaints about off-leash dogs on Banff’s high-use trails and throughout the community are extremely low, noting only three were received in 2017.

“Regardless of the low number of complaints, we believe that there are still a number of low-use areas where dogs are walked off-leash,” said Tony Clark, the Town’s bylaw services supervisor.

“My theory is a lot of people that are walking dogs in town realize they’re in higher use amenity areas and they’re leashing them up, but when they’re in a spot where people probably don’t see them, then they may take them off-leash.”

Patrols will be focused in the undeveloped corridor between Cave Avenue and the Middle Springs neighbourhood and near the CP lands between Marmot Place and the train station.

The Town of Banff will also talk to national park wardens, which are identified as peace officers under the municipality’s animal services bylaw, about collaborative patrols and enforcement to help offset some of the workload.

Councillor Chip Olver voiced support for the initiative, but also encouraged signs be placed in certain areas reminding people they can make a difference to wildlife by leashing their dogs.

“I think when we think of the animals and the impacts on animals, and think of bear 148, we have to go to the areas where there’s less consideration for walking dogs on leash,” she said.

In August, an off-leash dog chased a grizzly bear along busy Cave Avenue into the nearby woods near the Banff administration grounds before the bear turned on the dog and its owner. The bear soon disengaged.

In May this year, Parks Canada charged the owner of a large off-leash dog after an encounter between the Great Dane and a black bear on the Stoney Squaw trail near Banff.

Councillors Brian Standish and Ted Christensen opposed the move for proactive patrols, noting they did not believe this was a problem in Banff.

“I think residents of Banff, because we live in a national park, are well aware of the consequences of having a dog off leash,” he said.

“With only three complaints of off-leash dogs, I think bylaw’s time would be better spent proactively monitoring cannabis use and traffic violations.”

But Councillor Grant Canning believes there should be proactive patrols.

“Just because we don’t get requests, I don’t think that necessarily means it doesn’t happen,” he said.

“I think it is a concern, particularly those areas on the outskirts of town.”

Proactive patrols does not necessarily require any money in the operating budget, but it will require some re-focusing of staff in order to add specific patrols.

Bylaw officers have issued 17 ticket and warnings for “at large” dogs since 2017. Of those, Clark said only three were likely cases of the owners intentionally walking their dogs off-leash.

“The remainder of the occurrences were issues where dogs had wandered out of homes, vehicles and yards and there was likely no intent to have the dog at large,” he said.

A study published in 2016 in the online journal Nature.com showed the causes of about half of 700 carnivore encounters in North America and Europe were a result of inappropriate human behaviour, including dogs off leash.

Another study in 2014 in International Bear News showed 49 of 92 reported black bear attacks in Canada and the United States from 2010-15 involved dogs. Of those, dogs were injured half the time and in seven instances, the bear killed the dog.