Banff may spend up to $81,000 in its budget next year to be as prepared as possible in the event of a wildfire. “We’re concerned because we see headlines from around the world about wildfires, and we want that not to happen here," said Banff Councillor Chip Olver.
0
Jan 1, 2020 2:00 PM By: Cathy Ellis 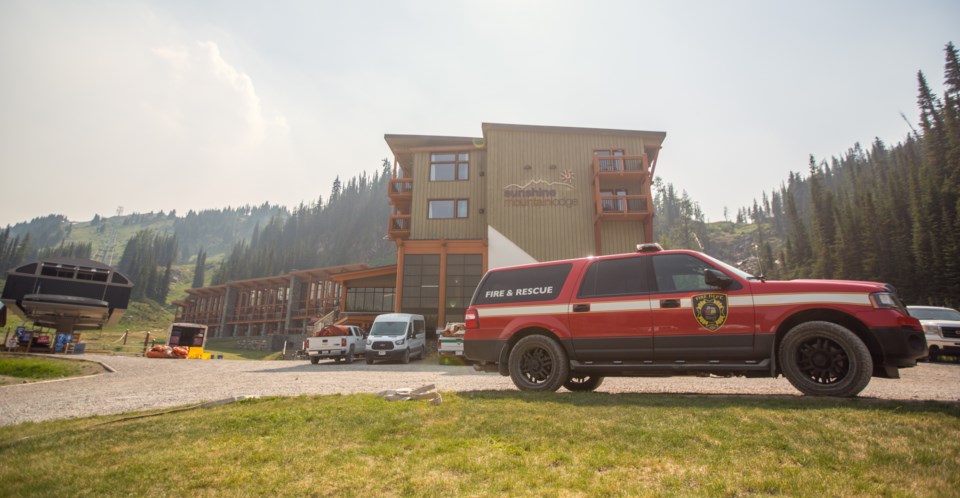 Parks Canada and Banff Fire Department members put out sprinklers and hose at Sunshine Village in July 2017. The Verdant Creek wildfire extended to 2.6 km from Sunshine, prompting precautionary safety measures to be taken to protect the resort.

BANFF – The Town of Banff may spend up to $81,000 next year on ways to help protect the community in the event of an advancing wildfire.

Council has tentatively approved the spending, but with a proposed six per cent overall budget increase as it stands right now, everything is still up for further debate when budget deliberations resume Jan. 13.

Banff’s fire department came forward with several funding requests, including for more FireSmart work, converting a retiring pump truck to pull a structure protection trailer for wildfire response and hosting a FireSmart forum among others.

“We’re concerned because we see headlines from around the world about wildfires, and we want that not to happen here; we know the community is concerned about this,” said Councillor Chip Olver, referring to devastating wildfires in Australia.

“In the context of our budget, everything we put in leads to an increase and I know it’s a challenging year for us, but compared to any damage to our buildings due to fire or any loss due to fire, it’s an insignificant amount of what that would be.”

During service review in December, council tentatively approved spending $13,800 for 2020 to do the necessary work to convert a 1999 pump truck to pull a structure protection trailer.

In April 2016, council approved keeping a 1992 pump truck as a three-year trial for wildfire response. The truck is used to pull the structure protection trailer and is connected to the trailer during the summer when the fire hazard hits high or extreme.

Both of the department’s units were deployed to two separate wildfires – the McLean Creek wildfire south of Bragg Creek in 2018 and the High Level wildfire in 2019 – generating about $41,000 in revenue for the municipality.

Adamo said as part of the capital replacement schedule, the existing 1999 pump truck is being replaced with a new unit, so the older one could be converted to be able to pull the structure protection units.

He said a pump truck with an 800 gallon water supply can be very useful in fighting an interface wildfire, especially when it has “pump and run” capabilities, meaning it can be used while the vehicle is in motion.

“I think this three-year trial showed there is a exceptional value in having a piece of apparatus like this, particularly when you look at the wildfire risk and its continued increase with climate change,” he said.

Council also tentatively gave the green light to spend $27,500 for 2020, to fund the work recommended in the municipality’s FireSmart assessment of its own buildings and critical infrastructure.

Recommendations in the report include conifer tree removal and deciduous tree replacement, as well as landscape changes.

“If we’re asking other people to do this we need to show leadership with FireSmart,” she said.

“We’re asking homeowners to FireSmart their homes, but they're not all doing it in one year; it’s occurred in other years,” he said. “I don’t see any problem with the Town of Banff doing the exact same thing.”

Another $11,800 per year, for 2020 through 2022, is tentatively in the budget to fund an annual wildfire hazard cleanup day to build on the success of the event in May 2019, which saw six neighbourhoods participate throughout the town. Approximately 13 tandem dump truck loads of tree branches and 144 cubic yards of chipped tree branches were removed from the six neighbourhoods.

In addition, $8,300, for years 2020 and 2022, is on the budget books for an ongoing Banff Summit or FireSmart forum. In 2017, the first community forum highlighted wildfire information and plans in place to help keep the community safe in the event of blaze.

Mayor Karen Sorensen voiced support for funding an annual forum, noting the last one was a great success.

She said several summers have been scary for residents, including in summer 2017 when the Verdant Creek wildfire led to precautionary measures like sprinkler systems and forced evacuation of Sunshine Village.

“We are, from my perspective, as prepared as we can be in this community and as I’ve said many, many times, what other community has Parks Canada at its back? We have another whole world out there that’s ready to defend the park and defend our community,” she said.

“The public not only needs to know more about what we’re doing, but this was incredibly informative and I think for the people who were there, they felt a whole lot of confidence around the fact that we are absolutely doing whatever we can.”

Lastly, council tentatively approved $19,300 per year, for 2020-22, to fund advertising and promotion of the work and programs they have around wildfire preparation.

Coun. Standish was unsuccessful in his attempt to cut that amount to $10,000 per year, getting support only from Mayor Sorensen.

“I’m just concerned that were spending a fair bit of money with no real background to say how we’re going to do this,” he said. “$19,300 a year for three years is an awful lot.”

“To be perfectly blunt, isn’t there $20,000 somewhere in somebody’s budget already in communications that can handle this,” she said. “At some point, we need to start looking at what the budget’s going to look like.”

But Coun. Olver said this is money the municipality will never regret spending if there’s ever a need to respond to a wildfire emergency.

“I know we’re here in the middle of winter and the thought of fire season isn’t in our community, but we know it’s active in other spots of the world at this moment,” she said.

“When an emergency happens, the more you’ve trained for it and the better you’ve prepared for it, the better your response is going to be,” she added.

“This is one of those things that we hope all of this preparedness is never needed, but if it is, it’s going to make the world of difference in terms of how well we react.”

Coun. DiManno agreed with the mayor that Banff is prepared as it can be, but the challenge is that that’s not communicated as well as it could be.

“What’s the point of having these plans if no one knows about it?” she said.

“Let’s reassure the public that we are as ready as we say we are. This is money well spent if it means the community is more prepared and more calm in an emergency.”