BANFF – A local environmental advocacy group is calling on local politicians to ban single-use plastic bags in the tourist town.
0
Jun 26, 2019 12:00 AM By: Cathy Ellis 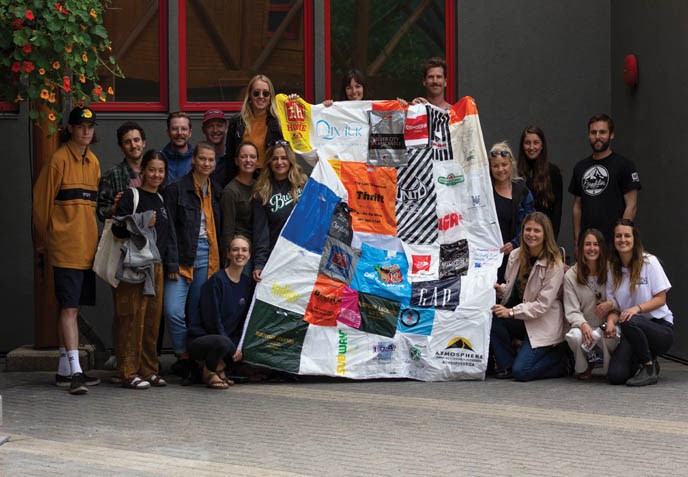 Banff’s Bear Minimum group members pose with a quilt made from single-use plastic bags in front of town hall on Monday (June 24).

BANFF – A local environmental advocacy group is calling on local politicians to ban single-use plastic bags in the tourist town.

Emma Murrell-Orgil, representing Banff Bear Minimum, said she hopes Banff could be the first community to ban single-use plastic bags since the federal government announced last week its plan to eliminate single-use plastics as early as 2021.

She said a first step would be to find out how many Banff businesses give their customers plastic bags, which she says are no longer an effective form of advertising for retailers, and how many bags are used each year.

“There’s already been some awesome success stories internationally and in Canada, and I’m asking for the Town of Banff’s input on how we are going to move forward and start taking action,” she said at a council meeting on Monday (June 24).

Murrell-Orgil said many businesses in Banff already have sustainability goals in place, adding this would fit nicely with those plans.

“In Banff, there were 4.18 million visitors last year, so it’s only growing,” she said.

“Tourists are coming through and visiting our retail stores, grabbing bags and then they’re taking them back to their countries.”

When discarded in landfills or in the environment, plastic can take up to a thousand years to decompose.

“In terms of plastics, its durability and elasticity makes it really quite harmful for wildlife,” Murrell-Orgil said. “Being in Banff National Park we should be caring for our wildlife.”

The Town of Banff also planned to do a waste study towards the end of the year, which would indicate how much diverted and non-diverted waste is plastic. On Monday, council asked administration to get the study done in the next 90 days.

Mayor Karen Sorensen said moving the study forward means council would have the information in time for 2020 service review and budget deliberations when next steps can be decided.

“Certainly, I would support the notion of reducing single-use plastics, including plastic bags, but I think first and foremost we need to get a little bit more information so we understand the magnitude of the problem in our waste stream,” she said.

“From my perspective, yes, plastic bags absolutely, but I’d like to see us maybe go further than that so it will be interesting to see what’s in there.”

Councillor Chip Olver said she wanted buy-in from the business community, noting one business owner with multiple properties indicated they had ordered tens of thousands of dollars worth of plastic bags to last the next five years.

Many places around the world are joining the plastic-free movement, such as Kenya and Rwanda, which have banned importation, production, sale and use of plastic bags, as well as Chile with its nation-wide ban on plastic bags.