“Nobody had a great 2020, but Bear Street in particular, from my perspective, did not actually get to take full advantage of the opportunity to have no fees in 2020 based on their specific circumstances," said Mayor Karen Sorensen
Jun 8, 2021 4:00 PM By: Cathy Ellis 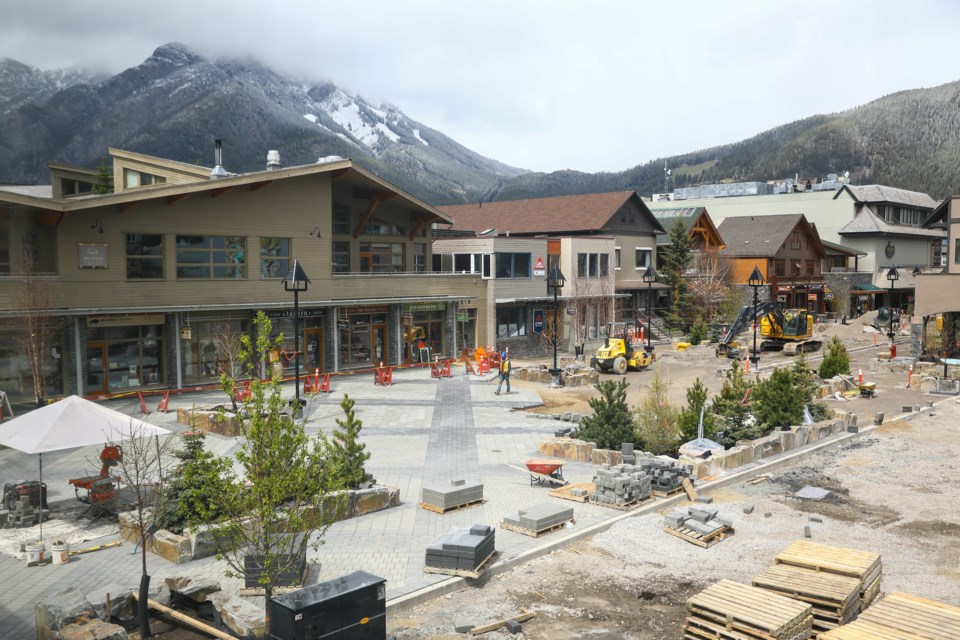 Construction workers work on laying down the pavement stones along Bear Street in Banff on May 20. EVAN BUHLER RMO PHOTO

BANFF – Fees for sidewalk patios and outdoor merchandising have been scrapped this year for Bear Street retailers and restaurants experiencing a double whammy from the financial fallout of COVID-19 and the area’s $9.5 million redevelopment.

At a May 25 meeting, Banff council voted unanimously to eliminate the fees for 2021, which would have generated about $13,000 from 10 restaurants with sidewalk patios and approximately $800 for outdoor retail merchandising. Councillor Peter Poole declared a pecuniary interest and abstained from discussion and voting because he is a business and building owner on Bear Street.

Officials say fees differ depending on the type of service and number of tables and chairs, noting a small café providing counter service typically would pay about $255 while a large full-service patio would pay $2,700.

Mayor Karen Sorensen said she is willing to support no fees for only Bear Street businesses this year and not other businesses with sidewalk patios throughout the downtown core.

“I have been a strong voice to say these fees are going back to benefit the downtown community as a whole,” she said, adding that Bear Street and other downtown streets with outdoor patios had fees waived in 2020.

“Nobody had a great 2020, but Bear Street in particular, from my perspective, did not actually get to take full advantage of the opportunity to have no fees in 2020 based on their specific circumstances.”

The $9.5 million redevelopment of the 200 block of Bear Street, which is based on the Dutch concept woonerf – meaning living street –  aims to help the street become a growing tourist attraction like Banff Avenue and boost business.

The project replaces aging water and sewer systems underground and adds planters and a self-irrigation system for lots of trees, adds new streetlights and a pedestrian-friendly ‘cobble-stone’ street.

There will be no curbs or centre line on the street, and the tile-slab surface aims to create an environment encouraging pedestrians to cross anywhere on the street and vehicles to drive slowly.

Adrian Field, the Town of Banff’s director of engineering, said completion of the project remains on schedule.

“We’re still on track for a July 19th completion,” he said. “There’s still lots of work to do… it’s very detailed and finicky operation.”

Council has also approved the sidewalk seating allocation for the 10 restaurants on Bear Street following a series of meetings between businesses and administration May 10-18 to address concerns on proposed allocations.

Officials say following those meetings, one restaurant will lose a small amount of area compared to the woonerf patio trials in previous years; however, the rest will be larger in size.

“It does appear, at least for this summer, we have a solution that most people are good with,” Mayor Sorensen said.

Councillor Brian Standish expressed concern some businesses will be able to open their sidewalk patios earlier due to how construction is unfolding from the centre of the street outwards – but he did not get support from his council colleagues for a universal start date.

“I think that’s totally unfair and I would like to see a universal start date for all restaurant patios,” he said.

The intention of the Town of Banff’s planning and development department is to allow patios to open sequentially based on construction activity.

“Our primary decision-making factor is what do we need to do to make sure we can get the street completed on time,” said Darren Enns, the director of planning and development. “We won’t issue any permits that effect constructability.”

Bear Street businesses concerned with proposed patio allocations
May 22, 2021 11:00 AM