BANFF – At least two new bison babies are roaming the backcountry of Banff National Park. Parks Canada spotted the first one with the herd in the Clearwater River Valley on June 18 and the second about a week later.
Jun 27, 2019 12:00 AM By: Cathy Ellis 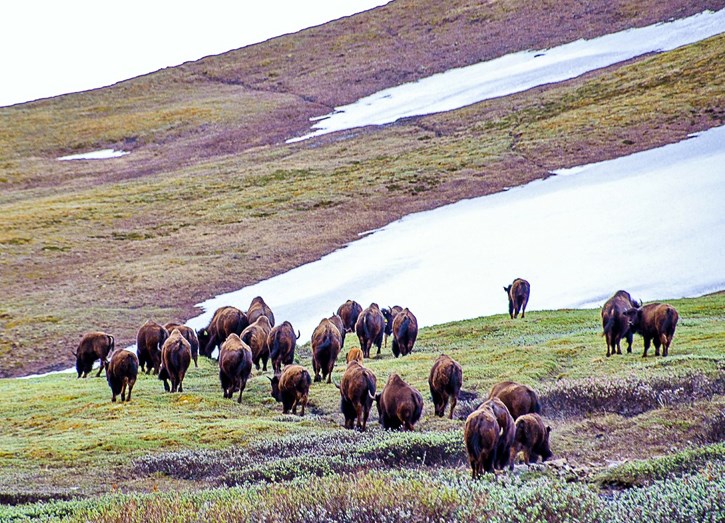 A small lighter coloured bison calf can seen with its herd in the Panther Valley of Banff National Park.

Parks Canada spotted the first one with the herd in the Clearwater River Valley on June 18 and the second about a week later.

Bill Hunt, resource conservation manager for Banff National Park, said calves have been born within the constrains of a fenced pasture for the past two seasons, but these one “were born of love wild in the Rockies.”

“It’s nice to see that they are settling into a much more natural process, now that they’re free and clear of not only the winter pasture, but even the larger summer pasture,” Hunt said.

“They are starting to figure out their timing and their seasons and things like breeding and calving as we’d expect with any other wildlife, so that’s really fantastic to see.”

The birth of the two “little reds”, as they are affectionately nicknamed for their red fur, brings the herd size to 36. The calves will start to turn more of a chocolate brown colour like their parents in the coming months.

“Twenty-two of these bison were born in Banff,” Hunt said. “We’ve definitely outnumbered the transplanted bison.”

For the first 16 months, bison were held in fenced pastures in the Panther River Valley in an attempt to anchor them to their new home before their release into the greater 1,200-square-kilometre reintroduction zone in July last year.

Hunt said all of the bison look healthy.

“They’re a little leaner at this time of year as they’ve gotten through the winter, but it’s all within the range of normal,” he said, noting remote cameras are also used to keep tabs on the condition of the herd.

For the most part, the herd stays within the reintroduction zone, only occasionally trying to wander beyond the 1,200-square-km area, which is fenced off in strategic locations to keep the animals there.

When the herd wandered to the northern part of the zone earlier this month into the Clearwater, Parks Canada staff herded them three kilometres southwards with a helicopter and on foot on June 18.

“They seem be fairly honed in on what we were hoping would be the core area between the Panther and Red Deer,” Hunt said.

“Of course, we kind of wait and see what each season brings, whether it’s high water or weather events, which can definitely effect their movements, but things are looking good.”

Two bulls remain separated from the herd. The GPS collar stopped working on one of the bulls, known as No. 18. He left the main herd not long after the animals were released into the bison reintroduction last summer and seldom reunites with the herd.

“They are kind of doing their own thing,” Hunt said.

“We’d expect them to come back in late July or August during the breeding season and we’ll watch for that and see if that pattern plays out.”

Millions of bison, estimated as high as 30 million at one time, roamed the plains of North America before overhunting edged the species to the brink of extinction in the 1850s.