“We have noticed an increase – or maybe it’s just that people are reporting it – but over the last couple of weeks we’ve had a few situations where people have been approached by a group of three coyotes,” said Blair Fyten, Parks Canada human-wildlife coexistence specialist
0
Feb 18, 2020 1:30 PM By: Cathy Ellis 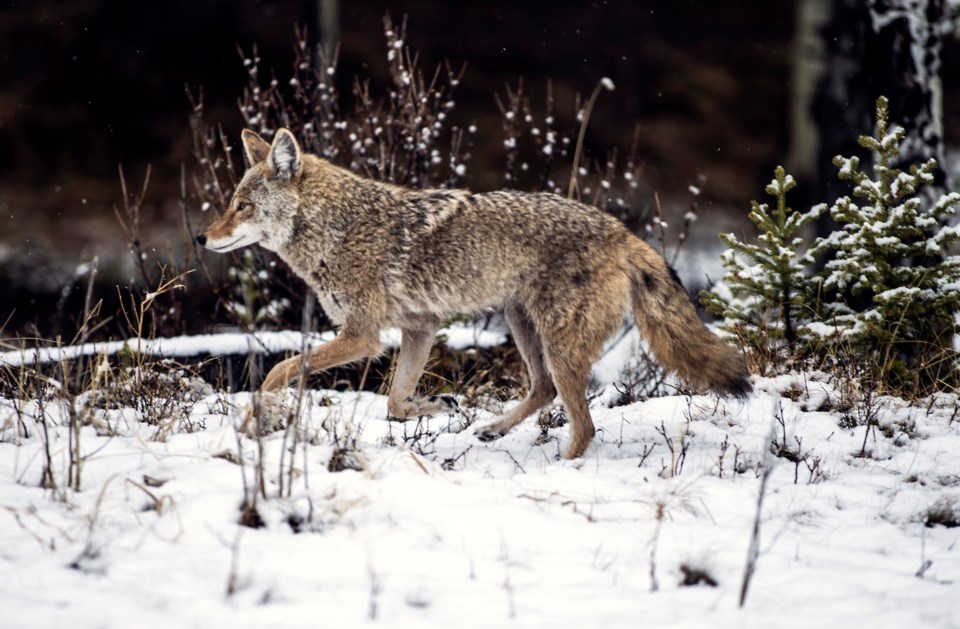 A coyote runs through the forest. RMO FILE PHOTO

BANFF – Residents and visitors are urged to keep their heads up following reports of bold coyotes approaching people in search of food late at night and early mornings.

It’s not uncommon for coyotes to be in the Banff townsite, but Parks Canada wildlife experts say there were several recent encounters involving three animals following or approaching people to within five metres.

“We have noticed an increase – or maybe it’s just that people are reporting it – but over the last couple of weeks we’ve had a few situations where people have been approached by a group of three coyotes,” said Blair Fyten, human-wildlife coexistence specialist for Banff National Park.

“They haven’t been real aggressive, but it’s been a little bit alarming that they’re getting so close. It’s just a little too close for people’s comfort.”

It’s unknown if the coyotes are a family group or potentially sub-adult animals cut loose by their mom that are venturing out on their own for the first time.

In one instance, the coyotes approached an individual walking a dog.

“It seemed the coyotes were focused on that dog at first,” Fyten said. “That person picked up the dog and waved their arms and vocalized, and the coyotes took off immediately.”

The first incident was reported on Feb. 6 near the 500 block of Banff Avenue, but some of the later coyote encounters have occurred to the northeast side of the townsite in the Deer Street area.

Wildlife experts say it’s not uncommon for coyotes to be in town after dark looking for a food reward, whether it’s food dropped accidentally or scraps that have fallen on the ground beside garbage containers.

“They probably have their circuit that they do looking for attractants that have been left out,” Fyten said, noting this serves as a reminder to make sure all food and garbage are stored securely. “I suspect that it is a fairly regular occurrence.”

For now, wildlife managers are switching up shifts to make sure staff are working earlier hours or later in the evening to patrol for the coyotes.

“We’ve been a little bit proactive where we’re trying to do some hazing on these coyotes,” Fyten said.

“At this point, we haven’t had any success with that, but we’d like to put a little bit of awareness back into these coyotes that they shouldn’t approach people.”

Parks Canada reminds people that feeding wildlife is illegal and that dogs must be kept on leash at all times.

If a coyote does approach, make yourself big, wave your arms and yell.

“Generally, that will push these coyotes off and they’ll take off and go elsewhere,” said Fyten.

“If you are walking a pet and you have a close encounter, pick your pet up and carry it. Likewise, make lots of noise and raise your arms and yell at the coyote.”

In spring 2018, a coyote denned under a deck on Glen Avenue and attacked and bit dogs in a defensive act to protect her pups.

In one case, a resident was riding her bike with her dog on leash on Glen Avenue when a coyote ran toward them and bit the dog. The coyote ran away and the dog was not seriously harmed.

The following day, the same resident’s daughter was walking the dog. A coyote sprinted toward them, but she managed to get back inside the home before it could attack the dog.

“We’ve had situations, more so in the spring, when we’ve had few coyotes denning in the townsite where they get a little bit aggressive with people walking by with their dogs,” Fyten said. “Dogs are a perceived threat to them.”