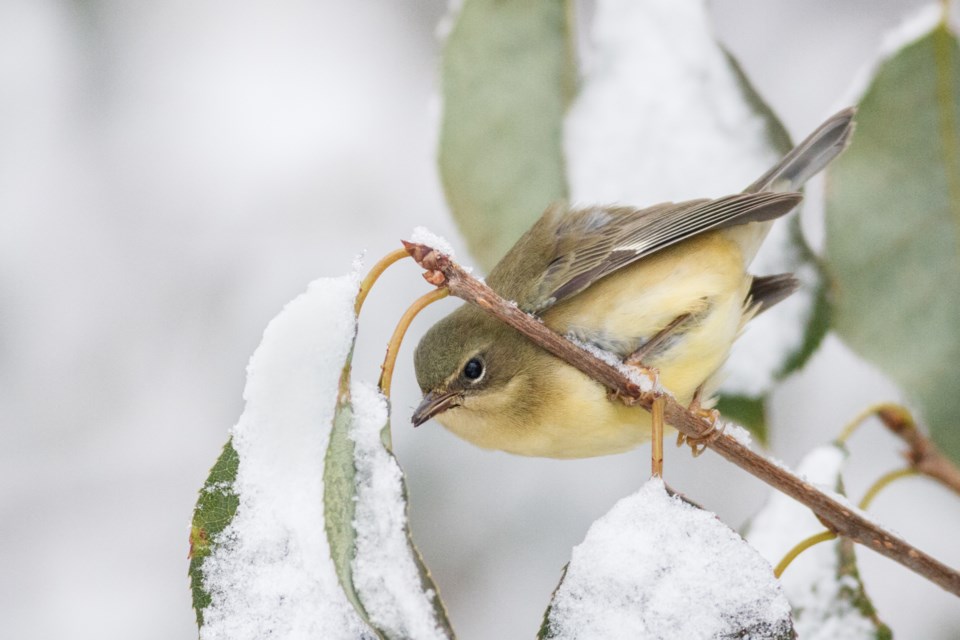 A female black-throated blue warbler peaks up from behind a leaf. ETHAN DENTON PHOTO

Banff bird count coordinator Heather Dempsey said she was impressed by the record number of 99 individuals who participated in the citizen science project, counting a total of 2,446 individual birds from 42 different species. The group collectively travelled 230 kilometres on foot for a total of 124 combined hours of bird watching on Dec. 14.

“The participation level, it’s amazing,” she said. “A lot of new people [came out] including a young family in Canmore that came out for the first time.”

Dempsey said she enjoyed hearing the stories of the day at the potluck dinner that took place after the count, especially the unique sighting that occurred over the count.

Many described the day as “quiet” going into the potluck, she said, so it was a nice surprise when the data recorded more birds than expected.

This year marks the 120th year of the Christmas Bird Count in North America, she said, adding it is interesting to see what is happening in the region based on the snapshot of data collected during the bird count.

One of the most surprising aspects to come out of the 2019 count was the low numbers of bohemian waxwings, totalling 110, spotted during the count. In 2018, there were a record 1,769 waxwings recorded. Dempsey said it was likely due to the rich mountain ash trees that were overloaded with berries at the time.

“Seedeaters and fruit eaters like the waxwing, finishes, crossbills, all these little birds that feed on cones they go where the food is, and it’s not here right now. They likely found food north of us – hopefully, they’re in good numbers somewhere.”

After tallying the numbers of the 2019 Christmas Bird Count, Dempsey said the bird population appears to be holding steady in the Bow Valley.

The bird count has been taking place in the area since 1975. Dempsey said 2019 falls one species short of the average 43 species sighting. She added that the lowest species numbers ever recorded was 36 and the highest was 54.

“We’ve got a few big years in there that probably skew it a bit,” Dempsey said. “But we're still in line with the long-term average.”

With so many eyes scanning the skies, she said it was surprising that some species were not seen during the day – no starlings and only a few pigeons were spotted.

“It was unusual, we went and we kind of went and got excited,” Dempsey said, adding that luckily someone spotted starlings later in the week during the count and they were able to add them to the data.

Considering the warmer weather and open water in the valley, Dempsey said the group was also surprised more water-based birds were not around.

“We usually get more of a variety of ducks,” Dempsey said. “We only got mallards and a handful of buffleheads. Usually, we get more species than that.”

A highlight of the count was a northern goshawk was spotted in a tree near Tunnel Mountain during the count, which was exciting because they are not often seen.

“Their very dark birds of prey. They fly through the forest looking for prey,” Dempsey said. “They look like something out of a Star Wars movie – little stealth pilots just navigating through the trees. They’re a very cool bird to see.”

Birds are not the only animals spotted during the count, Dempsey added, explaining that people spotted fresh cougar, skunk and otter tracks along with seeing red squirrels, rabbits, deer and elk.

Dempsey said the bird count was able to observe full complement of woodpeckers that can be expected in the Bow Valley in the winter.

A record 25 American three-toed woodpeckers were recorded and could be an indicator there are more dead coniferous trees in the area, providing a feast of insects, especially bark beetles, for the woodpeckers.

“It’s like a full poker hand,” Dempsey said with a chuckle. “It’s really good. We don’t get that every year for sure.”