BOW VALLEY – While the federal government announced earlier this month a ban on single-use plastics throughout the country by 2021, local organizations have already taken on the battle to reduce plastic waste in the Bow Valley.
0
Jun 20, 2019 12:00 AM By: Kiah Lucero 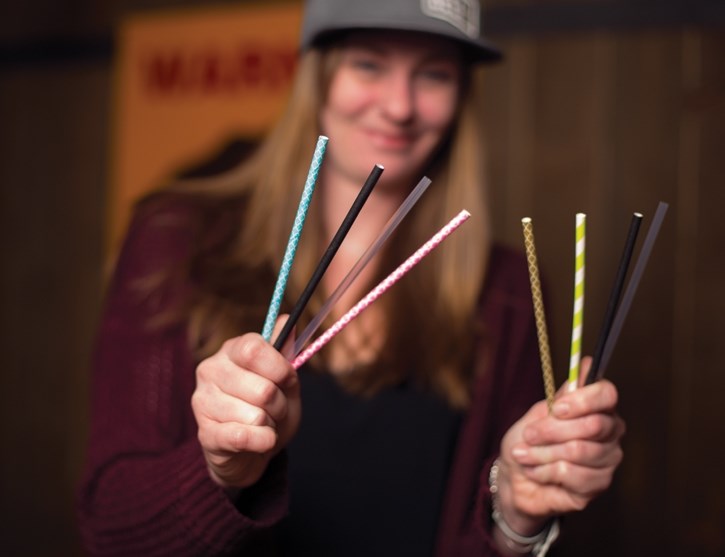 Heather Johnson, assistant manager for the Grizzly Paw Restaurant and Pub, shows off a variety of environmentally friendly straws at the pub in Canmore.

BOW VALLEY – While the federal government announced earlier this month a ban on single-use plastics throughout the country by 2021, local organizations have already taken on the battle to reduce plastic waste in the Bow Valley.

In 2017, Banff-based Bear Minimum partnered with Straws Suck Bow Valley as they began to tackle the plastic pollution issue with an initial focus on single-use plastic straws.

“We had two goals – it was to work with the community to either provide them with some alternatives to single-use plastics, or to show them how to make their own alternatives and then working with businesses to help them think about alternatives,” Emma Murrell-Orgill, organizer of the Bear Minimum, said.

“It was just to start a conversation and create a consciousness about our single-use plastic use,” Johnson said.

While many restaurants jumped on-board to reduce plastic straws use, there was a bit of push back in the beginning.

“Once they realized that when they weren’t handing [straws] out without being requested, you do actually save money, even though it is a more expensive product, so that was one challenge that we faced,” Johnson said.

Restaurants soon started to adopt the initiative, making it a part of their routine with the first step being to not offer plastic straws in the first instance. Straws Suck Bow Valley helped ease the transition from offering plastic straws with all drinks, to having more sustainable options available upon request.

According to the government of Canada’s press release, the single-use plastic ban will be under the Canadian Environmental Protection Act by the year 2021 in a plan to combat climate change.

Any products deemed harmful to the environment and human health are included in the ban like straws, shopping bags, cutlery, plates and stir sticks.

The Bear Minimum has also partnered with businesses throughout the Bow Valley in reducing single-use plastics in their operations through ideas like the coffee cup library and the stainless steel cup initiative. Additionally, the Bear Minimum provides workshops on how to repurpose old items and educational sessions on climate change.

While the ban on single-use plastics by the federal government is a step in the right direction, Murrell-Orgill anticipates some obstacles.

“There are so many great alternatives out there,” she said. “I think it’s going to be really easy to do the shift, but I’m sure there will be a lot of people that will put up a stink about it.”

In Canada, three million tonnes of plastic waste is produced every year. Canadians use about 15 billion plastic bags every year and as for plastic straws, nearly 57 million are used everyday according to the federal government press release.

“All the plastic that’s ever been created still exists today. I mean if we’re still going at the rate that we are then it’s never going to disappear,” Murrell-Orgill said.

For Murrell-Orgill and Johnson, awareness and education are a big piece of the climate change conversation.

“I don’t think us eliminating single-use plastics is going to flip climate change around, but I think it will start people thinking and through wanting to know about how everything is affecting the earth with climate change and all that – that will bring them into more in-depth things that are affecting climate change,” Johnson said.