BANFF – The rebounding Bow Valley wolf pack has been struck a blow with the death of one of the pups on the busy Trans-Canada Highway.
Mar 14, 2019 12:00 AM By: Cathy Ellis 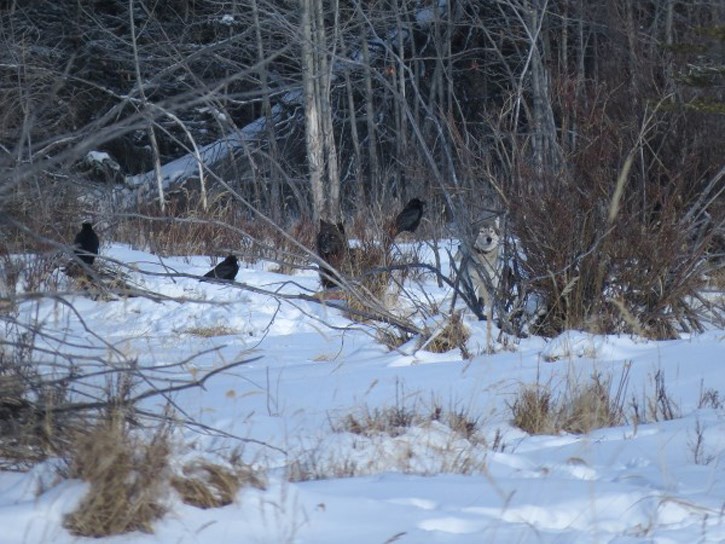 A pack of wolves feeding on an elk carcass near the Banff townsite in February. One of the pups in the pack was struck and killed on the Trans-Canada Highway on Monday (March 11).

BANFF – The rebounding Bow Valley wolf pack has been struck a blow with the death of one of the pups on the busy Trans-Canada Highway.

Parks Canada received a report that a male wolf pup was hit and killed on the highway between the Norquay interchange and Forty Mile Creek near Banff at about 8 a.m. on Monday (March 11).

Jesse Whittington, a wildlife biologist for Banff National Park, said it looks like the young wolf travelled over the cattle guard at the Norquay interchange to get inside the fence, based on snow-tracking.

“He repeatedly approached the fence and bounced back onto the highway, and it looks like he was essentially trapped and couldn’t figure out how to get back,” he said.

“There’s a chance the wolves were heading back to revisit the predation site,” he said.

On a happier note, the two adult wolves may have bred last month.

“The wolves had breeding season in February and she showed signs of estrus, so we’re hoping the Bow Valley pack has pups in spring,” said Whittington, noting wolves typically den mid to late April.

“The wolves travel throughout their territory until just before they den.”

The breeding female, known as 1701, is a surviving member of the former pack that was decimated in 2016.

That year, four pups were struck and killed by trains and two female wolves, including the breeding female - wolf 1701’s mother –  were killed for public safety reasons when they repeatedly entered campgrounds looking for food.

The Bow Valley pack now consists of the breeding male and female, as well as three remaining pups that are almost a year old.

The Trans-Canada Highway has claimed the lives of 13 wolves in the last 10 years. The last was in 2017 on the highway west of Castle Mountain. By comparison, 13 wolves have been killed by trains over the same time period.

John Marriott, a local wildlife photographer and wolf advocate, said Banff never seems to go more than a few months without bad news for wolves, also referring to park research wolves that have been snared and killed just outside park boundaries by trappers.

“I hope this doesn’t start a cycle downhill as so many deaths have done in the past,” he said.

Marriott said it’s interesting how shocked everyone is about the trapping deaths of Banff wolves outside the park, but he’s starting to wonder how accepting people are becoming to Bow Valley wolf pack deaths.

“Highway mitigation is already at 100 per cent, so this is likely the best reality for Bow Valley wolves going forward,” he said. “A minimum of one to two die every year, the pack turns over completely every three to four years - zero stability.”

For the most part, the wildlife exclusion fencing has been replaced from the park’s east gate near Harvie Heights to Sunshine Village as part of a $26 million project to make it more difficult for wildlife to get onto the highway.

Banff and Harvie Heights, but wolves can sometimes cross cattle guards.”
According to Whittington, Parks Canada’s highway staff had cleaned out the cattle guards at interchanges the previous week, but that doesn’t always prevent wolves from travelling over them.

He said electro-mats have been tested, but they didn’t work very well and kept shorting out, especially during winter. Electro-mats give off a mild shock at a low electric current when stepped on, deterring animals from crossing over them.

“They were unreliable and they aren’t a viable option,” Whittington said. “We hope the technology improves over time.”

The breeding male of the Bow Valley pack was recently captured and fitted with a GPS collar so Parks Canada could better track the pack’s movements. The breeding female has a conventional VHF collar, so she’s tracked with ground telemetry.

Whittington said this pack has learned to use wildlife corridors around the Banff townsite and has successfully been killing elk.

“It’s a fine balance because you want these wolves to be naturally regulating elk populations, but we also don’t want them to become too habituated, which can lead to food-conditioning,” he said.

“We want to stay ahead of the game and keep tabs on these wolves.”

The breeding female ventured into a busy campground in August, walking within a metre of two people sleeping under the stars and seeking food from occupied campsites, hasn’t done anything like that since.

So far, Whittington said the wolves have been behaving as wild wolves should.

“They’ve been killing elk adjacent to town, but they’ve been behaving well and haven’t come into town,” he said.

“Wolves vary in their comfort level around people and use of corridors. Many wolf packs rarely come closer than five kilometres, whereas these wolves are travelling around town regularly, which regulates elk and deer populations.”