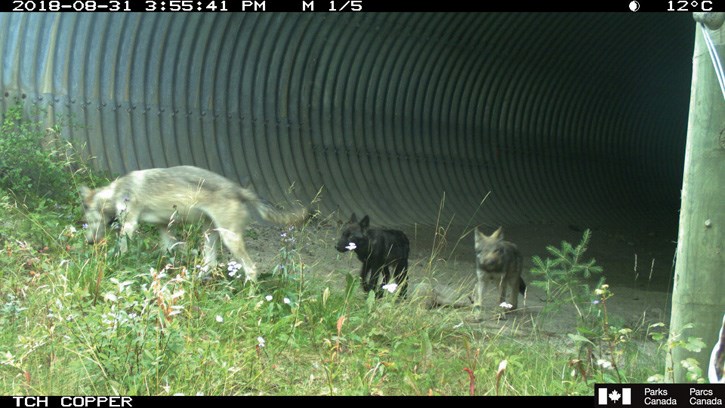 Three wolves captured on remote camera at an underpass beneath the Trans-Canada Highway in Banff National Park on Aug. 31, 2018. Parks Canada image.

BANFF – The Bow Valley wolf pack is doing well and staying out of trouble.

Wildlife experts say the breeding female that ventured into a busy campground in August, walking within a metre of two people sleeping under the stars and seeking food from occupied campsites, hasn’t done anything like that since.

“The great thing is she has not been in a campground looking for food and has received no food that we know of,” said Jesse Whittington, a wildlife ecologist with Banff National Park.

“We have to make sure that she and her pups don’t receive food rewards because if they become food conditioned they have much lower odds of survival.”

The Bow Valley pack had at least four pups in the spring and is now starting to roam far and wide throughout the park. They travel between Banff and Lake Louise, and through the fall expanded east towards Canmore outside of the national park.

“The last sighting I heard of, roughly a week ago, was of five wolves – two adults and three pups,” said Whittington. “There was a chance there was a fourth pup but it was just not seen.”

Last winter, the breeding female and her partner used the Fairholme benchlands between Banff and Canmore.

“What’s interesting is that looking at remote camera data we’re not seeing signs of many other wolves along the Fairholme,” said Whittington.

“In previous years, there’s been a separate pack that ranges through Canmore to Lake Minnewanka and the Ghost. It’s unlikely there’s a Fairholme pack this year.”

The Fairholme pack has varied in size over the years since first showing up in the early 2000s.

“That pack was susceptible to trapping and hunting when it leaves the park,” said Whittington.

Meanwhile, the Red Deer pack, which ranges from Ya Ha Tinda to Bow Summit, had a least four pups this year, which were documented up on remote cameras.

The two breeding wolves are fitted with GPS collars as part of a study to monitor predator-prey dynamics in former caribou range. Banff’s remnant Banff caribou herd was killed in an avalanche in 2009.

The wolves have been travelling all over the high country where caribou used to roam.

“That suggests to me if we were to reintroduce caribou they would face a high risk of predation,” said Whittington.

“Right now our efforts are on Jasper National Park where they have caribou and they have better quality habitat.”

The other national park pack, known as the Panther-Cascade, ranges from Lake Minnewanka to Red Deer River Valley and east to Ya Ha Tinda. It’s thought the pack failed to den this year.

“One member of the pack earlier this summer fell off a cliff from way up high and died in the north fork of the Cascade,” said Whittington, noting there are now only two members of this pack.

The wolves of the Panther-Cascade and the Red Deer packs have been roaming through the bison range reintroduction zone on the east slopes of the Rockies.

“They are certainly aware of bison and to our knowledge they haven’t tried to predate on them,” said Whittington.

“Bison are one of the more difficult animals to kill and I suspect more intimidating to wolves. I think it will take them a while to figure this out.”