The elk rut is underway as bull elk round up their harems in a fierce competition to breed and wildlife officials would like to remind people to keep their distance because the bulls are extremely dangerous at this time of year
0
Sep 5, 2019 11:38 AM By: Cathy Ellis 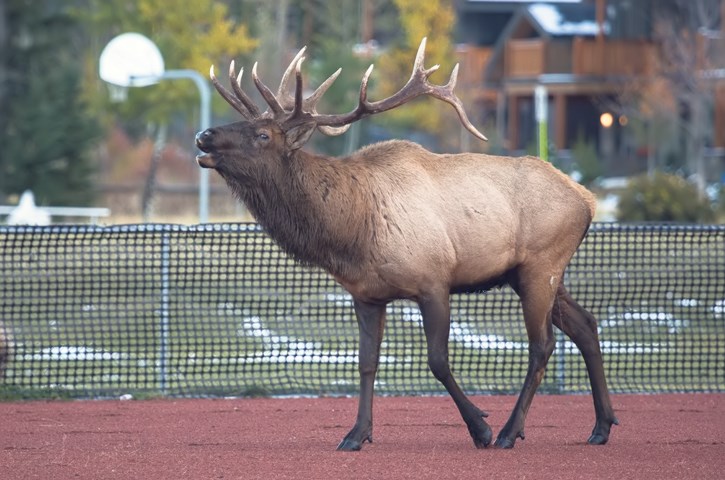 A bull elk and his herd at Our Lady of the Snows Catholic Academy in Canmore in 2017. During September and October, bull elk compete for female elk and can become dangerous if people get too close. RMO FILE PHOTO

With the fall rut underway, mature bulls become extremely belligerent and dangerous, as they begin rounding up female elk into harems in a fierce competition to breed throughout September and October.

Wildlife officials remind people against mistaking elk for tame animals just because they’re seen in town, on playing fields or feeding roadside, noting bulls won’t tolerate people getting too close and will lash out with hooves, or charge with antlers forward.

“They all have a line in the sand and you’re just never clear where that line is before you get a reaction from them. You need to be conscious of that and try to give them lots of space.”

While there have been no reported incidents in the Canmore area, Honeyman said elk have been bugling during the early mornings and in the evenings for the past week, indicating the rut is on.

“The elk are utilizing residential areas within town while the rut is going on, so that means potential interaction between them and people,” he said.

“If you’re out walking, biking or walking your dog, let them know you’re coming by making lots of noise.”

In Banff National Park, resource conservation officers patrol the town every morning during the rut, noting some cow elk have been coming into the edge of town.

“Every morning someone is assigned to drive around town and push them out, or haze them, if they come in,” said Blair Fyten, human-wildlife coexistence specialist for Banff National Park.

At this time of year, bull elk are also rubbing velvet off their antlers, likewise with deer.

“I still notice around town hanging Christmas lights and lights left out year-round, and those are potential issues,” said Fyten, noting lights can be come entangled in antlers.

“We recommend people keep lights several metres off the ground out of harm’s way.”

Parks Canada issued an official warning about the elk rut on Aug. 28.

Parks Canada provides the following tips to avoid and handle an elk encounter:

• Travel in a group.
• Watch for elk at all times and detour around them.
• If possible walk around elk on the high side of a slope or up-hill.

• Stay back at least 30 metres.
• Keep your dog on a leash at all times.
• An unleashed dog may prompt an elk to become aggressive as they view the dog as a predator (wolf or coyote).
• Carry pepper spray, a walking stick or an umbrella as protection.
• Act dominant if an elk gets too close.
• Raise your arms or any big object like a jacket or umbrella to make yourself appear larger, maintain eye contact, and never turn your back or run. Climb a tree or keep an object, like a tree or large rock, between you and the elk. Back slowly out of the area.

• If you are knocked down or fall, get up and try to move to cover or use an object to protect yourself.
• Do not play dead.

Report any incidents to the Banff National Park resource conservation office at 403-762-1470.