BANFF – Banff’s elected officials are considering the possibility of establishing a congestion charge, or toll, for vehicles driving into the busiest parts of the community, if a user-pay parking system doesn’t work out.
Jun 21, 2019 12:16 PM By: Tanya Foubert 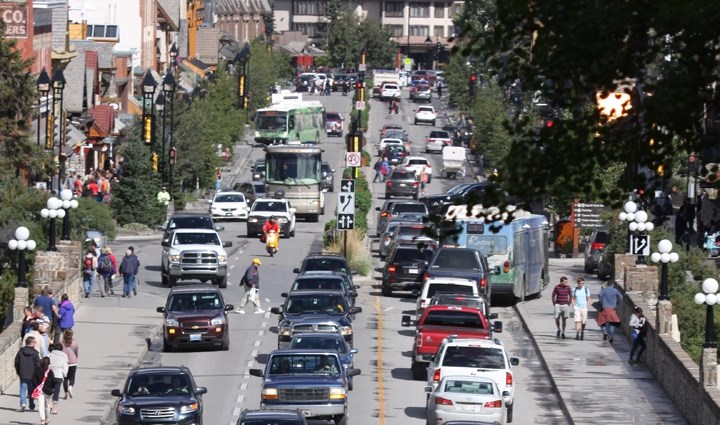 The Town of Banff is looking for solutions to help it cope with increased vehicle traffic and congestion in the resort community.

BANFF – Banff’s elected officials are considering the possibility of establishing a congestion charge, or toll, for vehicles driving into the busiest parts of the community, if a user-pay parking system doesn’t work out.

Earlier in June, Banff council directed administration to consult with the community about a proposed comprehensive parking management plan, which included use-pay parking, and return during budget review for council to consider its options.

But elected officials also received a report from administration on a congestion charge as an option to address traffic issues in the busy resort community.

Mayor Karen Sorensen said the idea of a toll, or congestion charge, is of interest, but council stopped short of directing administration to conduct a feasibility study into it, after it was decided to move forward with public engagement on the comprehensive parking management plan instead.

“I am not prepared to go with [administration’s recommendation],” said the mayor. “I do think it is fairly interesting and maybe by service review there will be more information on the user pay-parking and resident permit system.

“I am not opposed to this coming back at service review too and I am also prepared to accept this as information.”

Councillor Ted Christensen made the motion to bring the congestion charge option back at service review and that administration provide more details at that time on what it would cost to even implement this kind of system.

Banff’s engineering coordinator Stephen Allen explained to council the price-based mechanism is a way to manage demand for use of Banff’s busiest roads. The price, paid for by the road user, reflects the fact that there is a cost to have roads for people to drive their vehicles on.

A congestion charge, he added, provides a disincentive to drive when other transportation options exist without the added cost.

The mechanisms that a congestion charge can be applied to vary, but it could be applied to distance travelled, area entered, and can be flexible based on the time of day, or year.

Coun. Peter Poole thanked administration for a “thoughtful public policy approach” to the issue, but inquired into what would be needed to create a trial of the concept before full implementation.

“One of the things that would help me if this came back to service review, would be some estimates of what it would cost to do an experiment [trial],” Poole said.

Some of the challenges, said Allen, included the cost of setting up a system, concerns about effects on residents and businesses, and designing a system that meets the technical requirements. For example, the fact that vehicles in Alberta only have licence plates on the back and they are non-reflective, is an operational issue the system would have to deal with.

“There are a number of legal questions at play here,” Earl said.

London, England implemented a congestion charge in 2003 that charges vehicles $20 CAD to travel anywhere within a 21 square kilometre zone. More recently, the city implemented an extra ultra low emission zone that applies at all times to vehicles that do not meet minimum European emissions standards.

In 2016-17, London’s net revenues from the system were $280 million, which is used to support investments in other transit initiatives. Between 2000-12, the number of kilometres driven in central London was reduced by 23 per cent.

Singapore and Stockholm each have a congestion charge, while Vancouver is exploring the idea presently.

“A well-designed congestion charge system can have the effect of reducing congestion in that range of 10 to 20 per cent,” Allen said.

Allen told council that traffic data for Banff from 2014-17 was used to model what revenues potential a system for the small town may generate.

If a congestion charge of $5 to $15 was charged every day, from June 1 to Sept. 30 during the busy times of day, net revenues could range from $1.1 million to $5.5 million. The model assumes operating costs of 30 per cent of the total gross revenue, which ranged from $1.6 million to $8.2 million.

While a well-designed congestion charge could reduce traffic volumes and increase revenues, Allen said it would require funding to hire external consultants to study the feasibility and significant public engagement would be needed.

“We have taken our modelling as far as we can in house,” Allen said. “The software associated with taking this further is fairly sophisticated and we would need outside help with that.”