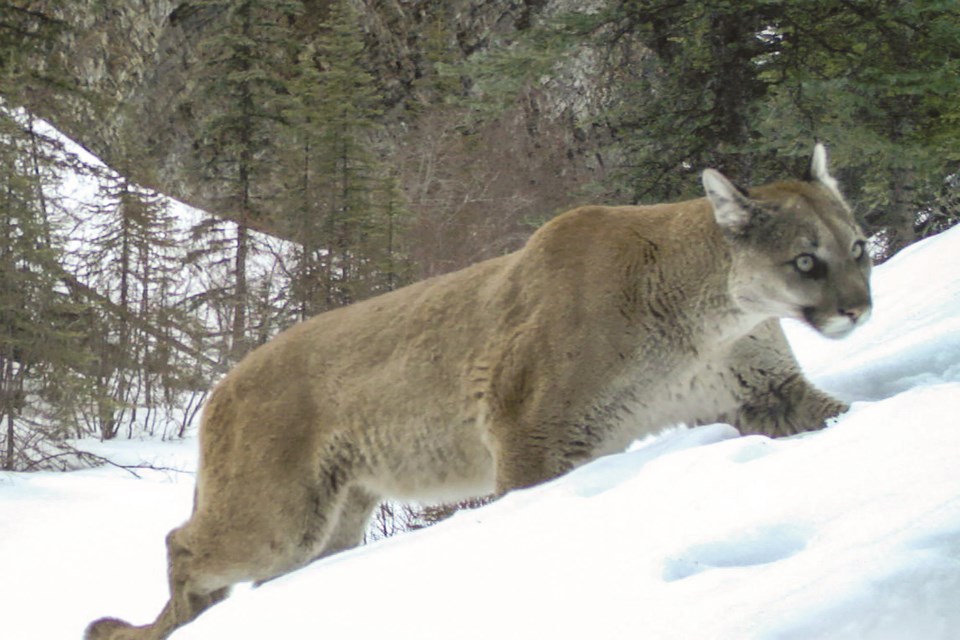 BANFF – A Banff woman woke to find a dead deer in her backyard, believed to have been killed by a cougar.

Saskia Griffiths said she woke up Monday morning (Jan. 18) to see a bunch of birds buzzing round her Kootenay Avenue home, but didn’t pay much attention until she spotted the birds again Tuesday morning.

“I went outside to check what was going on and there was a baby deer in the bush that had essentially been mauled,” she said, noting she never heard anything overnight.

“We called Parks Canada and they came around and confirmed it was a cougar attack,” she added.

“Apparently, it had been eaten by coyotes as well overnight.”

Parks Canada did not return any of the Outlook’s calls about this incident and other recent reported cougar activity in and around the Banff townsite, including one on Tunnel Mountain on Tuesday.

“They said there were potentially three more cougars in town, so we should watch out.”

Living with wildlife is something Griffiths said she is familiar and comfortable with as a Banff resident.

“We just have to pay attention and be aware of what’s around,” she said.

Resident Sierra Mcdermott Cottier said she came across a flurry of activity and resource conservation trucks on Tunnel Mountain not far from Douglas Fir resort.

“The warden said that a big cat took down a deer and it’s still in the area,” she said.

Parks Canada reports that their team responded to a cougar hunting and killing a deer on Tunnel Mountain Road within the...

According to the Town of Banff, Parks Canada reports that its team responded to a cougar hunting and killing a deer on Tunnel Mountain Road within the town boundary on Tuesday afternoon.

“The human-wildlife co-existence specialist reported that this is a natural occurrence in Banff National Park and the cougar did not show any aggression towards humans, unlike the situation with a different cougar last week.”

Last week, Banff National Park wildlife experts were forced to put down a cougar, which had a close encounter with a long-term resident walking his dog, and was hunting deer in the townsite.

Parks Canada made the difficult decision to put down the eight-year-old female cougar on Jan. 13 after she was found “emaciated, dehydrated, and in general poor health.”

Despite several requests over the past week about this situation, Parks Canada did not grant an interview.

However, a written statement from the federal agency, which provides no opportunity to ask questions, said wildlife experts reviewed all possible options for managing this incident.

“After careful consideration, Parks Canada made the difficult decision to euthanize the animal,” said Justin Brisbane, public relations and communications officer for Banff National Park, in an email.

“By hunting within the Town of Banff, and showing aggressive behaviour to person with an on-leash dog, the cougar’s behaviour indicated it was becoming increasingly less wary of humans as its health deteriorated.”

At about 3:50 a.m., on Jan. 13, Parks Canada wildlife officials responded to a report of a cougar near Muskrat and Wolf Street in the Banff townsite.

Staff tracked the cougar into the backyard of a home next to the pedestrian bridge.

Brisbane said the cougar made no attempt to flee when it spotted Parks Canada staff, noting it was then tranquilized and physically examined.

“It was emaciated, dehydrated, and in general poor health; with various injuries, including a broken upper canine tooth,” he said.

Based on tracking and remote camera data, Brisbane said wildlife experts are confident this is the same cougar that approached a man and his dog on the pedestrian bridge on Jan. 10.

At the time, it was thought the cougar was likely back in town that night for a mule deer it had killed and stashed in a nearby vacant lot on Muskrat Street under the cover of darkness earlier that day.

In an interview earlier that week, Dan Rafla, a human-wildlife management specialist for Banff National Park, said the dog was the first to get wind of the cougar and then a "cougar sort of jumped out of the bush.”

“The cougar ended up following the individual for a short while. The individual did everything right in that he collected his dog, he stood strong, he yelled at the cougar, waved his arms,” he said.

“The cougar was focused and did continue to follow the individual and his dog. We’re uncertain if it was interested in the person or the dog, but most likely the dog, which was quite old,” he added.

“The guy backed up and the cougar got within a fairly close distance of two metres, but as he moved into an area that was more open and more lit up, the cougar ran off.”

A widespread cougar warning remains in place for the Town of Banff and surrounding areas because there are more cougars in the area, including a mom and her kitten.

“Parks Canada would like to remind visitors that they share the surrounding habitat with wildlife and to take the necessary precautions when travelling through the mountain parks,” Brisbane said.

Parks Canada asks residents and visitors to report all cougar sightings within the Town of Banff to Banff Dispatch at 403-762-1470.

If you see a cougar: