Provincial wildlife officials are cougars and bears have also been seen in residential neighbourhoods, likely in search of newborn elk calves
Jun 3, 2021 5:00 PM By: Cathy Ellis 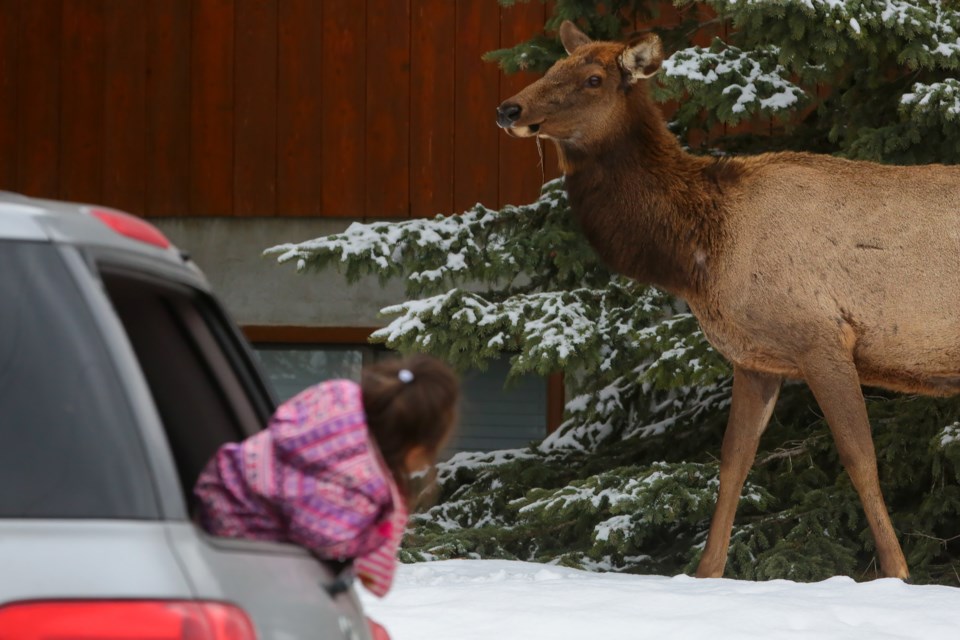 Juliana Phung pokes her head out the back window of a car to watch as an elk walks on 15 Street near Larch island in Canmore in April. EVAN BUHLER RMO PHOTO

CANMORE – Female elk defending their newborn calves have attacked at least two people, knocking them to the ground, and charged many more in the last few days.

Provincial wildlife officials say a large cougar was also spotted walking through a busy residential area near Lions Park during a recent afternoon, while a bear was seen around homes in the south Canmore region.

“We have had reports and I have personally seen bears in certain areas looking for elk calves,” said Jay Honeyman, a human-wildlife conflict specialist with Alberta Environment and Parks.

“We’ve had a couple of cougar sightings around dinner time in residential areas and it’s possible they are also searching out elk calves – and this is always a concern about having elk in town. It could happen anywhere.”

Elk calving season, which typically runs mid May to early July, is a time of year when mother elk will aggressively protect their newborns by charging or striking with sharp hooves.

A newborn calf is defenceless against predators for the first three weeks of its life, so cow elk keep newborns well hidden in bushes and shrubs. The mother elk visits the calf only a few times a day, while always standing guard not too far away.

Honeyman said daily incidents have been reported over the past 10 days, in which female elk have charged walkers and bike riders who either deliberately or inadvertently get too close.

“There are multiple calves being born in town, and that is why these incidents are happening. They’re happening all over town… in residential neighbourhoods, in people’s backyards,” Honeyman said.

“Some incidents have occurred with people seeing elk in advance and continuing to close the distance, and then the elk charges, and in some cases people didn’t see the elk as it came out of the woods and took a run at them.”

As a result, Alberta Parks has issued an advisory about aggressive elk in areas around the Bow River, Canmore Nordic Centre, municipal lands, Larch Island, the Bow River Loop Trail, and lands south of the water treatment plant to the river.

There are also several spot closures in place, including the boardwalk along Spring Creek and a wooded area between Benchlands and Wapiti Close in Eagle Heights.

As for the people who were charged and knocked to the ground, Honeyman said they ended up with relatively minor superficial injuries and luckily did not require a trip to the hospital.

“In a couple of the cases, the elk have been pepper sprayed so we’re certainly encouraging people to carry bear spray,” he said.

Female elk giving birth in town, sometimes within the heart of residential neighbourhoods, has been an increasing concern for provincial wildlife officers in recent years.

It is thought elk are seeking a safe haven for their young from predators, such as bears and cougars.

However, Honeyman said one of the big concerns is predators are being drawn into developed and populated areas, which poses a public safety risk and typically a poor outcome for predators.

“Long-term we need to figure out a way to discourage elk from dropping calves in town,” Honeyman said. “That’s a discussion with the Town and Fish and Wildlife.”
On some occasions, wildlife officers pick up the calves and drop them in forested areas nearby where the female elk can follow; however, resources are stretched to the limit.

“We’ve got a lot going on and so we’re closing the areas just to minimize the interactions at the moment,” Honeyman said.

Fish and Wildlife officers advise some signs of an agitated elk include staring with flattened ears and raised rump hair, curled lips, grinding teeth, and charging and kicking.

To avoid an elk encounter while in elk country, people should travel in groups; always stay at least 30 metres away; don’t take pets into areas where elk are calving or if you do keep them on leash; and carry bear spray for protection.

If approached by an elk, act dominant by raising arms or a big object; maintain eye contact; never turn your back and run; if possible, climb a tree or keep a large object between you and the elk; and back away slowly out of the area. If you are knocked down or fall, get up and try to find cover, but do not play dead.