A Pacific frontal system is expected to move into the southern interior region of B.C. tonight and bring snowfall amounts of up to 25 cm for Yoho, Kootenay and Banff national parks
0
Dec 19, 2019 12:30 PM By: Rocky Mountain Outlook 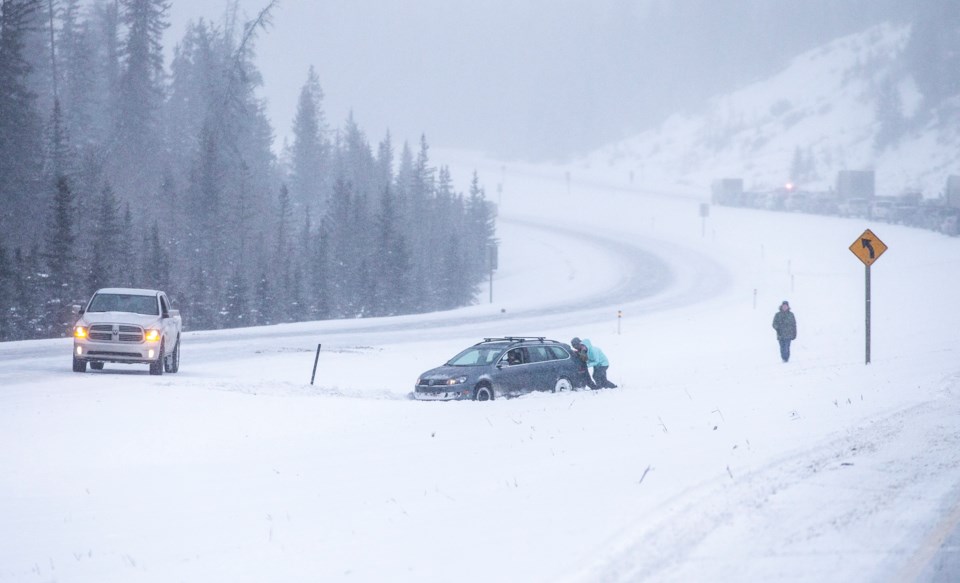 Environment Canada has issued a snowfall warning for Yoho, Kootenay and Banff national parks on Thursday morning (Dec. 19) and a special weather statement for the Canmore and Kananaskis region as a Pacific frontal system is expected to bring up to 25 centimetres of snow to certain areas. RMO FILE PHOTO

BOW VALLEY – A snowstorm is on its way and is expected to bring up to 25 centimetres of snowfall to parts of the valley beginning Friday afternoon (Dec. 20).

"A Pacific frontal system will move into the southern interior [of B.C.] tonight and then remain stalled over the region through Friday," stated the snowfall warning for Yoho and Kootenay.

"Snow will redevelop this evening and become heavy at times tonight and Friday resulting in snowfall accumulations of 15 to 25 cm. The snow will likely become mixed with rain in the valley bottoms Friday afternoon as temperatures rise above freezing."

Snowfall amounts between 15 to 25 centimetres are expected along Highway 93 north of Lake Louise by Friday afternoon.

The Kananaskis region, Canmore, Exshaw and Ghost Lake areas can expect to see snowfall as well into Saturday morning (Dec. 21) according to the special weather statement.

"Communities and highways close to the British Columbia border could see total snowfall accumulations of 10 to 20 centimetres, while the eastern slopes of the Rockies will see warm, dry, and gusty conditions," stated Environment Canada. "Warming temperatures could cause some precipitation to fall as rain or wet snow, especially in valleys at lower elevations."

Motorists are cautioned to drive according to the conditions, as holiday travel through the mountains could become difficult Friday and Saturday along the Trans-Canada Highway, Highway 3 and Highway 93.

Go to Environment Canada to monitor alerts and forecasts, and email ABstorm@canada.ca or tweet #ABstorm with reports of severe weather.

Go to DriveBC or Alberta 511 for up-to-date road conditions.