“It was just this beautiful bird with the biggest beak I’ve ever seen … it was just so magical and cool,” said 14-year-old Charly Garrow of a white-faced ibis she spotted in Banff National Park
May 21, 2020 4:00 PM By: Cathy Ellis 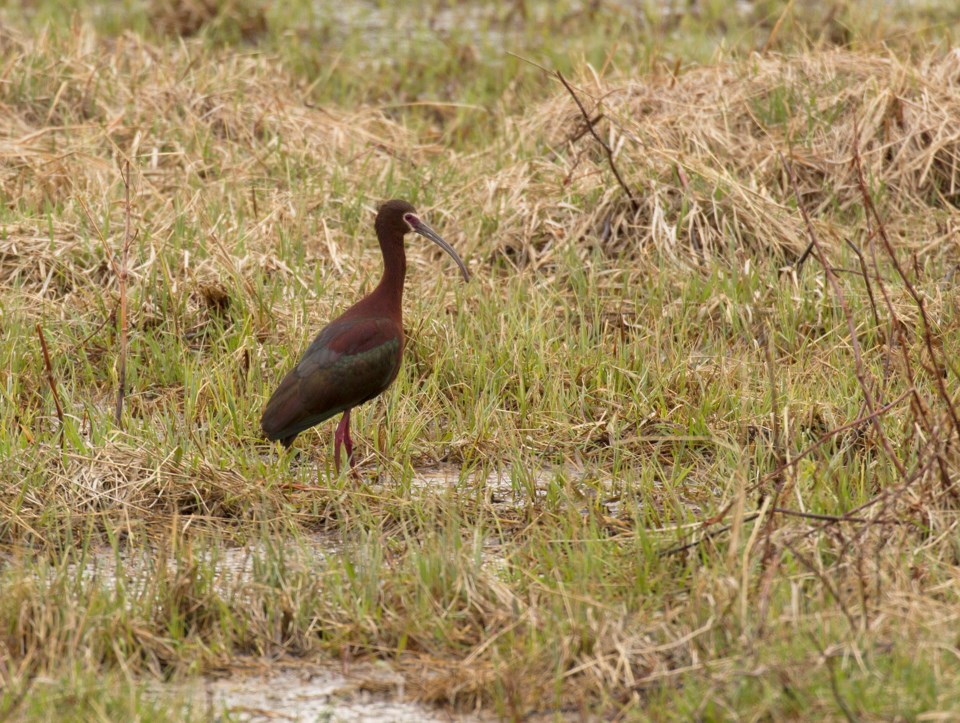 In Canada, the white-faced Ibis is at the northern edge of its breeding range, extending into Alberta, Saskatchewan, and Manitoba, with southern Alberta becoming a well-established breeding area. This one was spotted recently in Banff National Park. RENO SOMMERHALDER PHOTO

BANFF – The first ever sighting in Banff National Park of a white-faced ibis has been recorded.

Charly Garrow, 14, was out for an afternoon walk with her dad on Tuesday (May 19) when they came across the maroon-coloured wading bird in a marshy area of the park.

Pulling out her binoculars and bird book, she was quick to identify the bird as a white-faced ibis, with its pink bare face bordered with white feathers, a grey bill, red legs and metallic green and bronze-like wings.

“It was just this beautiful bird with the biggest beak I’ve ever seen … it was just so magical and cool,” she said, noting it was feeding on worms.

“After we saw it, we learned that it was quite off its flight path; it’s never been seen here before.”

In Canada, the white-faced Ibis is at the northern edge of its breeding range, extending into Alberta, Saskatchewan, and Manitoba, with southern Alberta becoming a well-established breeding area.

According to a 1999 Alberta Naturalists newsletter, the first report of a white-faced ibis in this province was in 1941 in Rosebud, located about 25 kilometres south-west of Drumheller.

White-faced ibis are becoming a more regular sight in lakes and wetlands in southern Alberta during the breeding season, such as Frank Lake near High River and Pakowki Lake in the south-east corner of the province on the Alberta–Montana border.

A wading bird, it nests in parts of a marsh with dense vegetation, such as bulrush, cattails and shrubs. It then builds a nest from reeds and usually lays three or four blue-green eggs at a time.

Expert local birder Jason Rogers, who heads up Banff Community Bird Walks and is the local representative for e-Bird, a worldwide online database of bird observations, confirmed this was the first sighting of this species for Banff National Park.

“We don’t get many firsts anymore, just because people have been birding in the park for a very long time,” he said, noting the last time Banff had a first record was in 2016 of a sage thrasher, a songbird more commonly seen in the south-eastern corner of the province.

Rogers said the first confirmed sighting of a white-faced ibis in Alberta was at Pakowki Lake in 1974.

In reference to the report of a white-faced ibis at Rosebud in 1941, he said there were likely other sightings prior to the 1970s that weren’t confirmed.

“Before written records were being made, these birds no doubt wandered into Alberta from time to time,” said Rogers. “They are such nomadic birds.”

Over the years, the white-faced ibis has quite rapidly expanded its range north for breeding, and has established permanent colonies here. There has been as many as 500 birds at Frank Lake in some years.

“It is a bird that generally winters along the Gulf Coast – Texas, Louisiana and down into Mexico – and some winter in southern California,” said Rogers.

“Then they migrate to various locations, mostly within the western U.S. The Great Basin seems to be their core nesting region.”

Rogers said part of their breeding range in the Great Basin region is in the midst of a drought, and because the white-faced ibis is a marshland nesting species, it requires water.

“So they have evolved in an environment where wetlands come and go due to droughts and that sort of thing, and they will go wandering in search of greener pastures, so to speak,” he said.

“That will bring them north quite often and they’ve sort of been continuing to expand north as populations reach carrying capacity at the more southern locations; they start moving north looking for new spots to colonize.”

Climate change may be playing a part in the expansion of the bird's range as a species.

“If that’s in fact happening, we can see these birds sort of shifting their breeding range north.”

Studies have shown that other factors influence these birds, such as habitat destruction for human development and agriculture.

“If that’s also happening in the southern parts of their range, then they’re going to be coming north to seek wetlands,” said Rogers.

“There’s a whole range of things from climate to habitat destruction to pesticide use in certain areas.”

Rogers said the white-faced ibis is an “absolutely breathtaking” bird when seen in good light.

“When that bird is in sunlight, the iridescence on its feathers shows up, with reflections of magenta and emerald,” he said. “It’s amazing.”

Meanwhile, Garrow was so taken by the bird she remained to watch it for about an hour.

“I just started getting really into birding in April and we’ve been looking for all birds,” she said, noting she has been studying biodiversity as part of the Grade 9 curriculum.

“We go every single day and it was just really cool to come across this bird when we’re pretty new to this.”