Bear 143 emerged from her den this spring with two cubs. One cub was presumed to have died prior to her being struck and killed on the railway tracks in Banff National Park last Thursday (Sept. 3). The other was last seen mid-August and has not been found after her death.
Sep 9, 2020 5:55 PM By: Tanya Foubert 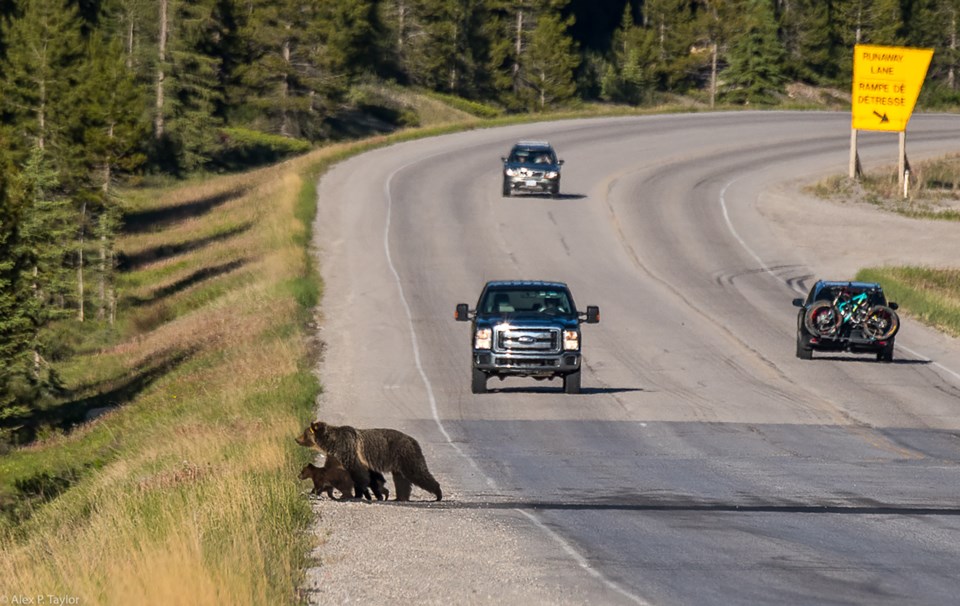 Grizzly bear 143 is seen in Banff National Park in 2018 with two young-of-year cubs. On Sept. 3, 2020, bear 143 was struck and killed by a train on the CP Rail tracks. ALEX TAYLOR PARKS CANADA PHOTO

BANFF NATIONAL PARK – Grizzly bear 143 emerged from her den this past spring with two cubs, but after she was struck and killed by a train in Banff National Park last Thursday (Sept. 3), there has been no word about their status.

Banff, Lake Louise and Kootenay field unit resource conservation manager Dwight Bourdin confirmed Wednesday (Sept. 9) that neither of the cubs have been found.

Bourdin said  bear 143 was last seen with both of her cubs in June and the last time she was observed in August, she only had one with her and it was not found at the site of the train collision.

“We did conduct an extensive search of the area,” Bourdin said. “It is possible the cub has passed away prior to the accident, however we will continue to monitor the area and adjacent travel routes closely.”

Bear 143 was hit on the eastbound CP Rail tracks between Castle Mountain and Lake Louise. Bourdin said she was along a stretch of the railway line that is adjacent to a steep slope and the Bow River.

“Parks Canada suspects the bear was using the track as a travel route and due to strong winds and flowing water in this location, was unable to detect the train,” he said.

Grizzly bear expert Reno Sommerhalder said with grizzly bears listed as threatened in Alberta, the loss of the female bear and her cubs is significant to the population.

“With less than 700 grizzly bears, down from a historical high of 6,000 bears, every single bear matters in this population,” Sommerhalder said.

“We must give every single bear a chance to live in the wild – that is where they are meant to be.”

According to Parks Canada, there are an estimated 60 to 80 grizzly bears with overlapping home ranges in Banff National Park.

Bear 143 is the first bear to be struck and killed on the railway line since 2012.

According to Bourdin, there were no grain spills or carcasses observed in the area. He said staff will continue to monitor the area in case bear 143’s cub is still alive.

From 2012-16, Parks and CP, along with University of Alberta researchers, undertook a joint project to better understand the root causes of collisions involving grizzly bears on the rail line and develop solutions.

But for Sommerhalder, not enough is being done to address the issue of grizzly bear mortality on the railway tracks. He said it is not just this one species affected, as other wildlife are also killed as a result of train strikes.

Mitigations should be pursued regardless of cost, he said, and that includes looking at potentially fencing the railway’s transportation corridor similar to the Trans-Canada Highway to address this issue.

“I am frustrated with the inaction from Parks Canada and CP Rail with regards to these re-occurring mortalities,” he said. “Each is a tragic loss to the national park and the citizens of this country – something more needs to be done.”