BANFF – An adult male grizzly bear is dead after being hit by a semi-trailer earlier this week in Banff National Park – the first time a grizzly bear has died at the hands of humans in Canada’s premier national park in five years.
Jun 5, 2019 3:15 PM By: Cathy Ellis 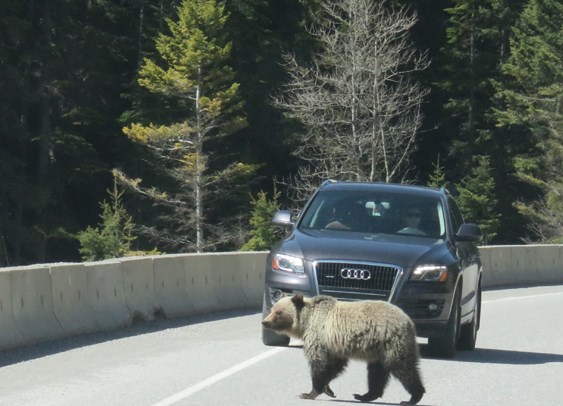 A grizzly bear crosses in front of a vehicle in Banff National Park.

BANFF – An adult male grizzly bear is dead after being hit by a semi-trailer earlier this week in Banff National Park – the first time a grizzly bear has died at the hands of humans in Canada’s premier national park in five years.

The driver of the truck immediately reported he had struck the 295-pound animal about 12:20 a.m. on Tuesday (June 4) on Highway 93 South, about one kilometre south of the Trans-Canada Highway heading up the hill towards Storm Mountain.

“He called it in and was very distraught,” said Bill Hunt, resource conservation manager for Banff National Park.

“Based on the location and he was going up that big hill, we don’t believe he was speeding or there was anything untoward about this; it was just an unfortunate accident.”

The grizzly bear had no collar or ear tag, but a hole in an ear indicated he was tagged at some point, likely as part of the Parks Canada-Canadian Pacific Railway study that looked at ways to reduce grizzly bear mortality.

DNA samples were collected so Parks Canada can determine the bear’s identity. They have confirmed, however, that it was not one of the Bow Valley’s high profile male rivals – Bear No. 122, also known as the Boss, and bear No. 136, called Split Lip.

“We don’t know exactly which bear it is,” said Hunt. “There’s a very small chance it’s from outside the park and we haven’t handled it before, but it’s more likely a bear that we’ve handled in the past.”

Grizzly bears are a threatened species in Alberta. In Banff National Park, there are an estimated 65 grizzlies.

The last human-caused grizzly bear death in Banff was in July 2014, when a young collared adult male bear was killed on the Icefields Parkway near Hector Lake viewpoint.

Banff’s last female grizzly bear death was in July 2011, when a five-and-a-half year-old bear known as bear No. 108 was struck on the Trans-Canada Highway near Castle Mountain.

Bear 148, who spent 90 per cent of her time in Banff, is not considered in the mortality data because her death in 2017 was outside the park. After several run-ins with people in Canmore, she was moved by provincial wildlife officials several hundreds of kilometres away north of Jasper, but was shot by a hunter in B.C. within months.

Hunt said Parks Canada has a target of keeping human-caused deaths of female grizzlies below 1.2 per cent a year, based on a four-year running average, adding grizzly bears in Banff have the lowest known reproductive rate for the species.

“We’re at zero. We’ve had no female deaths since 2011,” he said, referring to No. 108. She survived the initial impact, and park wildlife specialists helped get her off the highway by cutting a hole in the wildlife exclusion fence, but she died later from her significant injuries.

Hunt said Banff’s population of about 65 bears has been relatively stable over the past 10 years.

In terms of population ecology, he said it’s fortunate the grizzly bear killed in the early morning hours Tuesday wasn’t a female.

“An individual male can breed many females, but any loss of a bear is very unfortunate,” he said.

Colleen Campbell, with the Bow Valley Naturalists, said it’s sad to hear of a grizzly bear death, particularly because they are a threatened species.

She said she recalls tracking a bear’s movements in and around the Redearth Creek area in 1993 as part of a grizzly bear study, noting there were far fewer cars buzzing by at night.

“Now animals are subjected to night traffic almost no matter where they live,” she said. “The road traffic never stops.”

“We get into a real state of anxiety for every grizzly – it’s like an elephant being shot – but we don’t get into a state if it’s a black bear, elk or deer,” she said.

“We should be concerned whenever animals are killed because of human behaviour, whether driving cars, [or] trains.”

Hunt said the male bear killed in the early hours of Tuesday morning was in an unfenced area of Highway 93 South, but noted fences were installed in other areas along the stretch of road into Kootenay National Park, considered hotspots for wildlife mortality.

He said speed limits throughout the park are set at 90 km/h to help reduce the chance of highway deaths.

“That’s why we ask drivers at all time to obey the speed limits and drive with caution,” he said.

According to Parks Canada’s database, there have been 15 human-caused grizzly bear deaths in Banff National Park since 2005.

In Alberta, the latest available statistics show 224 grizzly bears died at the hands of humans between 2008-17.