Grizzly bears are back in Banff National Park

“I think 122 is a very likely candidate to be one of the first bears,” said Dan Rafla, a human-wildlife coexistence specialist with Banff National Park.
Apr 1, 2021 12:02 PM By: Cathy Ellis 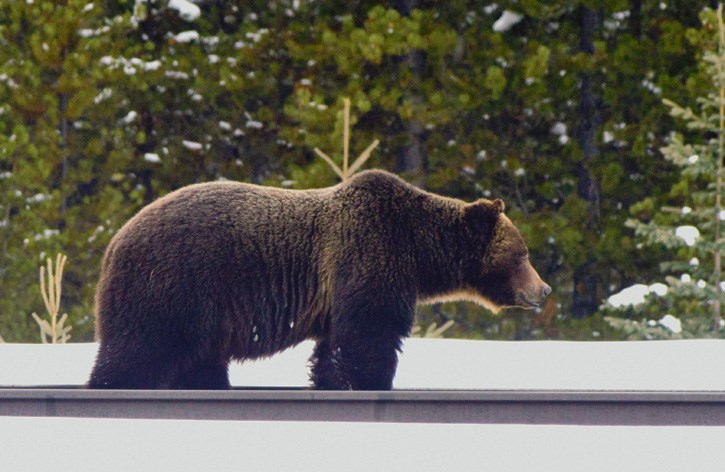 BANFF – The bears are waking up in Banff with the arrival of spring.

In Banff National Park, the first sighting of a grizzly bear was reported in the valley bottom west of the Banff townsite on the evening of Monday (March 29).

Parks Canada officials suspect it is likely bear No. 122, also known as The Boss, or possibly Bear No. 136, referred to as Split Lip for his disfigured mouth.

“I think 122 is a very likely candidate to be one of the first bears,” said Dan Rafla, a human-wildlife coexistence specialist with Banff National Park.

“This is part of his core home range as it is with bear 136, so it’s most likely one of our known bears.”

With bears beginning to emerge from dens, wildlife experts say it’s time to follow all safety precautions, but also to be aware of the needs of the park’s treasured wildlife.

“It’s a time of celebration, it’s the arrival of spring, and the hardest part of winter is behind us, but we also need to recognize the needs of these animals – give them the space and distance they need to survive, to thrive,” Rafla said.

With that said, food is scarce when bears emerge from hibernation.

They typically spend spring searching for food in the valley bottoms and don’t move to higher elevations until the snow disappears and vegetation greens up later in the season.

Typically, bear 122 and 136 head to the train tracks when first out of their dens each spring, where they search for spilled grain, or the remains of other wildlife that were struck and killed by trains over winter.

Rafla said it’s a difficult time of year for bears as they look for food, adding there’s no new vegetation for them to feed upon yet.

“There is always a chance there’s grain on the tracks that might bring them in if there’s no alternative,” he said.

“Having said that, we’ve recently worked with local CP staff to proactively remove any sprinkled grain on the tracks within the park.”

In addition, Rafla noted Canadian Pacific Railway also reports any time animals are struck on the railway line to Parks Canada throughout the year.

“Every spring or late winter, we will then ride the tracks looking for any carcasses that may have gone undetected,” he said.

Male bears and female bears without offspring will be the first to emerge from their winter hibernation.

Following that, females with older offspring will come out of their dens; then females with young-of-year cubs will be the last to emerge likely in late May and into early June.

“Those cubs are extremely vulnerable, so they’ll be nursing as we speak in the den site with their mom,” Rafla said.

With bears emerging, it’s time for residents and visitors to brush up on their safety awareness, including carrying bear spray, having it easily accessible, knowing how to use it and ensuring it has not expired.

Make noise, travel in groups, and keep dogs on leash and under control at all times.

Rafla said it’s also important for people to be aware of their surroundings when walking on trails.

“We still have snow on the ground, so you can pick up if there are bear tracks around,” Rafla said.

“You can change your trajectory to avoid where those bear tracks are going.”

Rafla also urges people to give bears their space.

“Every time they stop feeding – maybe there’s pressure from people or they avoid an area – that will contribute to a lack of calories and food that has potential consequences for them down the road,” he said.

In 2020, grizzly bear No. 122 was the first bear spotted in Banff National Park on Feb. 28  – the earliest a grizzly had been recorded out of the den in at least the last decade.