LAKE LOUISE – A nanny mountain goat fitted with a GPS collar for research purposes in Yoho National Park was apparently killed and eaten by a grizzly bear.
0
Nov 8, 2018 12:00 AM By: Cathy Ellis 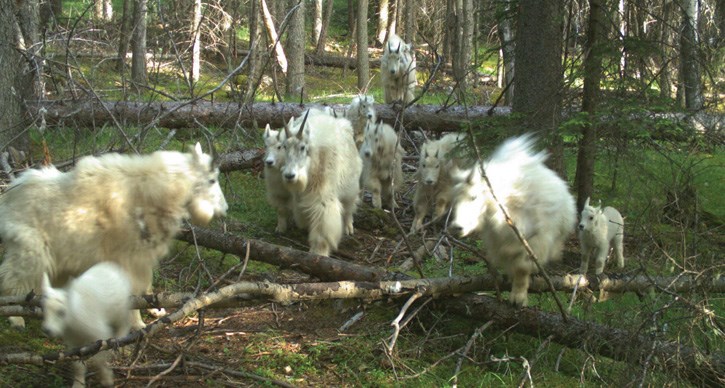 LAKE LOUISE – A nanny mountain goat fitted with a GPS collar for research purposes in Yoho National Park was apparently killed and eaten by a grizzly bear.

While there was evidence at the site that a grizzly bear had eaten the mountain goat, it can’t be 100 per cent confirmed the bear killed the goat because it may have scavenged the carcass.

Cougars and wolves are known to prey on mountain goats, but one of the world’s leading mountain goat experts says grizzly bears also hunt and kill goats much more than people may think.

Steeve Côté, a wildlife biologist and professor in the department of biology at Laval University in Quebec City, said several grizzlies have killed at least 15 goats at a study site at Caw Ridge in west central Alberta.

“Grizzly bears have been the main predator of mountain goats at my study site for a number of years. This is common elsewhere too.”

The scant remains of a mountain goat were discovered by Parks Canada wildlife staff just below treeline near Sherbrooke Lake in the eastern end of Yoho last month.

On Oct. 22, a GPS collar went into mortality mode and sent a signal indicating the collar had not moved in the previous 24 hours, which led Parks Canada to think the animal may have died.

Wildlife staff were flown by helicopter the next day to investigate. It looked like a grizzly had eaten the mountain goat based on evidence at the site, including bear tracks and scat.

Seth Cherry, a wildlife ecologist in Lake Louise, Yoho and Kootenay, said he couldn’t say for sure that the grizzly bear killed the goat, noting it may have scavenged the carcass.

“It looked like the bear had potentially dug a hole and cached the carcass and came back to eat it,” he said.

“It might have been on it for a couple of days but I can’t say for sure.”

There’s also a possibility another of the 10 collared mountain goats being studied in Yoho National Park was killed by a grizzly bear last spring, but Cherry said that was never confirmed.

“By the time we got to it, we really weren’t sure if it was a scavenging event or predation,” he said.

Park officials stressed that this isn’t conclusive evidence that grizzly bears are preying on mountain goats in the area.

“I think it’s the first little bit of data towards preliminary results to indicate what mortality rates look like for goats and hints at the possible reason for mortality,” said Cherry. “We’re only one year into our study.”

Mountain goats are expert rock climbers and superbly adapted to a mountainous and snowy environment. They spend much of the year at or near the alpine, rarely venturing to lower elevations except to visit salt or mineral licks.

As part of the GPS collar study, Parks Canada is watching goat use of mineral licks at the Lake O’Hara turnoff and Sherbrooke Creek to make sure goats aren’t negatively affected by the Trans-Canada Highway twinning project in Yoho.

Researchers also want to learn more on where mountain goats travel in the area, including where they cross the Trans-Canada Highway and how they’re moving between mountain ranges.

Meanwhile, a man scrambling above Lake Louise in late September reported watching a grizzly bear chase and try to kill a mountain goat, but the goat managed to elude its predator.

In addition, a Canmore man who was working security for the Trans-Canada Highway twinning project in Yoho National Park saw a grizzly bear try to hunt goats at a mineral lick.

“He was doing the night watch and that’s when he saw a grizzly bear go at a group of goats, but they all escaped,” said Cherry.