BANFF – It was love at first sight. When one of Banff’s treasured heritage homes, known as the McLeod/Crosby Residence, was put up for sale, resident Dazhang Yan put in an offer that very same day with a plan to turn the 137 Lynx St.
Nov 22, 2018 12:00 AM By: Cathy Ellis 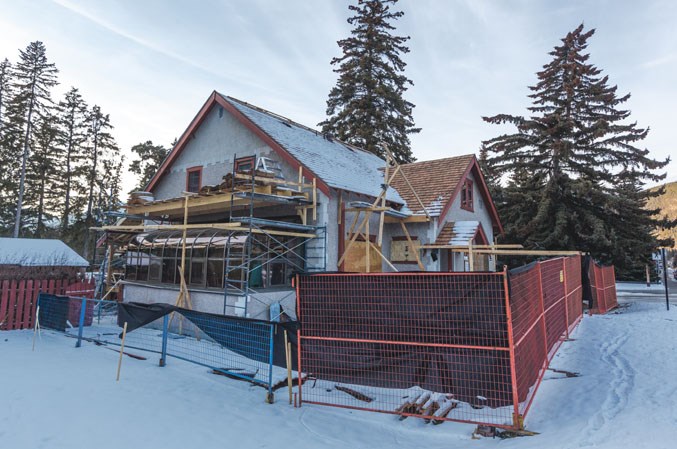 The historic McLeod/Crosby home located at 137 Lynx Street in Banff is pictured during its redevelopment in November, 2018. The home is being transformed into a bed and breakfast.

BANFF – It was love at first sight.

When one of Banff’s treasured heritage homes, known as the McLeod/Crosby Residence, was put up for sale, resident Dazhang Yan put in an offer that very same day with a plan to turn the 137 Lynx St. property into a bed and breakfast home.

“We quickly learned the importance of this building to the community,” said Yan’s daughter Jane Cheung, who spent four hours at the Whyte Museum of the Canadian Rockies poring over the home’s history.

“It made me and my family connect to this house. My dad loves this house. We’ve found something that will enrich our lives.”

Last week, the family’s dream to open a bed and breakfast came to fruition when Banff’s Municipal Planning Commission approved a four-room B&B for the heritage home that met all land use bylaw requirements and sought no variances.

The riverfront (RRF) land use district allows for the single family homes, but community-wide density changes to the land use bylaw in 2012 to deal with Banff’s housing shortage intends this district to be redeveloped to duplex housing over time.

As more redevelopment to create housing continues to occur, there is a fear there will be ongoing loss of important heritage properties. There’s no new land in Banff, so any development is redevelopment and requires knocking down buildings.

Banff currently has 13 heritage properties protected by municipal bylaw, but there are another 143 properties considered to have heritage value not legally protected from demolition or redevelopment.

Councillor Chip Olver, who is a council representative on MPC, said she was delighted to support this application for a B&B home.

“When this home came up for sale, I had fears that maximum development on the site might occur at some point and something big would be built replacing this lovely historic home on a very prominent corner in our community,” she said.

“To have a bed and breakfast application coming forward preserves this house, and the applicant obviously recognizes the historical nature of this property and respects that.”

The heritage property, a one-and-a-half storey craftsman home built in 1931, is named after James McLeod, a business partner of Bill Warren and president of Rocky Mountain Tours – the main competitor of Brewster Transport during the 1930s.

The residence was run as a boarding house until 1966 when the property was sold to Crosby Co. Ltd. At the time of the sale, Louis Crosby, general manager of Brewster Transfer Co., owned and lived in the neighbouring property Abegweit.

His son Robert Crosby moved his family into the residence in 1968, at which time three backyard cabins were demolished. Robert Crosby himself was an accomplished engineer, academic and active member of the community.

The McLeod/Crosby Residence is on the municipality’s heritage inventory, and was considered an A-ranked property under the previous heritage system.

News that the new owners planned to retain the home was welcomed by Anita Bartram Crosby, who along with her brother Rick decided to sell the home following their father Robert Crosby’s death at age 95 in 2017.

“I support this,” she said. “My fear was someone would buy it and demolish it, but this way the house is being preserved.”

In addition, the planning and development department has conditionally approved a second application for the site for a residential renovation, including a roofline extension, roof material replacement and rear deck enlargement.

“Throughout the renovation process, the applicants have demonstrated commitment to maintaining a lot of the historical character-defining features of the exterior of the building,” said Jennifer Laforest, heritage planner for the Town of Banff.

Later this month, council will consider development of a heritage master plan that looks at various tools to protect heritage buildings, from acquisition options to some of the more common tools such heritage rezoning, density transfer or density bonus programs, special variance considerations for redevelopments that protect heritage buildings, as well as various grants and loan programs.

Laforest said municipalities across Canada are developing increasingly sophisticated plans and strategies to protect heritage within their communities.

“While council may consider a single tool or project to preserve community heritage, a master plan offers the opportunity to achieve long-term results,” she said.

“In order to protect a greater number of heritage buildings within the community, a coordinated effort will be required.”