Cody Friesen, from Calgary, pleaded guilty in front of Judge Les Grieve on Sept. 18 at the Canmore Courthouse for only hiking with one other person in an area that requires groups of four or more to hike together through grizzly bear habitat near Lake Minnewanka
Sep 28, 2019 12:00 PM By: Jenna Dulewich 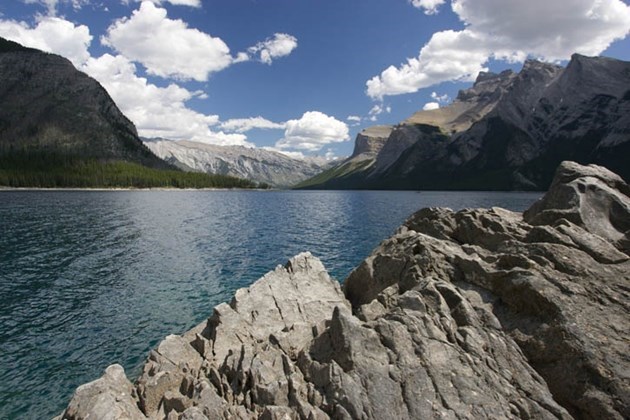 A Calgary man has been fined $600 for hiking in too small of a group at Lake Minnewanka in Banff National Park.

BANFF – A Calgary man has learned a hard $600 lesson that hiking in pairs in not enough along the shore of Lake Minnewanka in Banff National Park this past summer.

Cody Friesen, from Calgary, pleaded guilty in front of Judge Les Grieve on Sept. 18 at the Canmore provincial courthouse for only hiking with one other person in an area that requires groups of four or more to hike together through grizzly bear habitat near Lake Minnewanka.

On June 31, Friesen, who was originally in a larger hiking group, found the pace to be a little too slow and made the decision to hike further ahead with another individual before being caught by a park warden.

As one of the core areas for grizzly bears in Banff National Park, the Lake Minnewanka area has several restrictions for hikers for the Lake Minnewanka Trail from Stewart Canyon Bridge to the East Park Boundary, Aylmer Pass Trail and Aylmer Lookout Trail.

Hikers must be in groups of four or more, carrying bear spray at all times; cycling is not permitted along the Lake Minnewanka Trail; and dogs are not allowed beyond Stewart Canyon Bridge, according to the Parks Canada website. Friesen, noted the Crown, had bear spray at the time.

"The key attraction is the abundance of an important food source for grizzlies: buffaloberries. All of the bear attacks resulted from hikers travelling alone or in a small group who surprised female grizzlies with cubs along these trails during berry season. Surprise bear encounters involving cyclists have also occurred along the Minnewanka Trail," the government website states.

Judge Grieve reminded Friesen there are several other trails in the area where he can hike with only two people, or there are hikes where he can even hike by himself.

"There are other hikes available that are two-people hikes," Judge Grieve said.

In a joint submission between Federal Crown Prosecutor Anita Szabo and the defence, a $600 fine with six months to pay was recommended.

The fine will go to the Environmental Damages Fund, administered by the Environment Canada, to direct funds as a result of fines, court orders and voluntary payments to priority projects that will benefit Canada's natural environment.