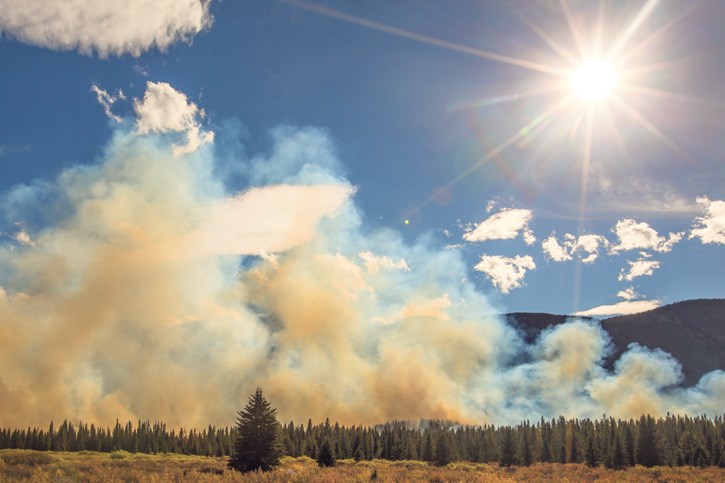 It is believed the small two-metre by three-metre fire, which was reported by golf course staff on Tuesday (July 28), is a holdover from one of several lightning storms that swept through the Bow Valley and other parts of Banff National Park last week.

Jane Park, fire and vegetation specialist for Banff National Park, said it will likely be out by end of day Tuesday.

“We have one crew on it,” she said. “It’s quite small, but it is digging in, which is indicative of the state of the forest right now.”

The fire hazard in Banff National Park was rated extreme as of Monday (July 27) given warmer forecasted temperatures this week.

Environment Canada’s current forecast for Banff calls for 31 C Tuesday, 29 C Wednesday, 26 C Thursday and Friday, 27 C on Saturday and 29 C on Sunday – with only brief showers forecast for Thursday.

“We’re going through this extended period of hot weather and we’re in extreme for the first time this season and there’s no relief in sight,” Park said.

“Our crews are ready to respond.”

Several thunderstorms rolled through the region last week, and Parks Canada has been actively monitoring for smoke to find if there are any hold-over lightning-sparked fires in the park.

“Some of the storms came with a fair bit of precipitation, but it was quite variable across our field unit,” Park said.

“In the backcountry we got some rain, but within the town of Banff, we actually missed most of the rain.”

There is also a contracted helicopter on standby in Radium, which is shared for firefighting response in the mountain national parks.

“We have the two fire crews, but we also have a number of other fire personnel that can respond to fires within the field unit, so we are prepared to deal with wildfire,” Park said.

“We have access to the helicopter in Radium and we have options of contracting additional helicopters and additional crews when required,” she added.

“I am in contact with the local helicopter company to make sure that they are available, but at the moment we’re using the one that sits in Radium because its a 15 minute flight from Radium.”

There is currently no fire ban in Banff National Park, but Parks Canada reminds residents and visitors that fires are only allowed in designated fire pits.

With COVID-19, Park said it’s particularly important this year to be extra careful.

“We need to be really careful with our resources and ensure that our crews are safe, and part of that is making sure that the public doesn’t light any illegal fires in places that they are not allowed,” she said.

“That does pull our resources into situations where we have to work closely in larger numbers, and we want to make sure our crews are not unnecessarily exposed to higher risk activities, like fighting large fires in the backcountry where they have to be in large groups.”

Meanwhile, in the Town of Canmore, a fire advisory is now in place. Safe wood campfires in campgrounds within fire rings or backyards are permitted, as are charcoal briquettes, portable propane fire pits; gas or propane stoves and barbecues; and catalytic or infrared-style heaters.

If you see a wildfire, report it immediately by calling 310-FIRE.

In Alberta, there have been five new wildfires in the last 24 hours as of July 27, with three of them completely extinguished. Overall, there are nine small wildfires burning. Only 752 hectares have burned in total so far this fire season.