Matthew Clarke was hiking with a group, including two children, on May 20 when he went into an area at Johnston Canyon that has been closed by Parks Canada to protect the nesting grounds of endangered black swifts
Jul 17, 2019 11:00 AM By: Jenna Dulewich 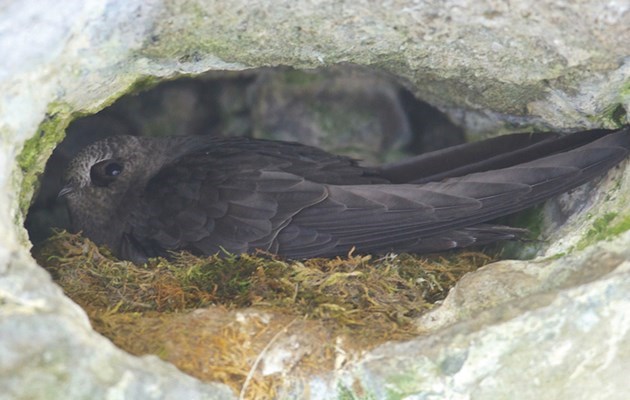 BANFF – A man pleaded guilty for entering a closed area at Johnston Canyon and paid a $500 fine in the Canmore Provincial Courthouse last Wednesday (July 10).

Parks Canada officially put the closure in place on April 15 until Nov. 15, restricting hiking, walking or any kind of foot travel to the official trail to minimize the disturbance to black swifts that nest along the cliffs in the Canyon.

Matthew Clarke was hiking with a group including two children on May 20 when he went off the trail into the closed/restricted area.

“The trail had a large amount of signs and physical barriers preventing people from leaving the trail, which were ignored,” Federal Crown prosecutor Jeremy Newton explained.

“The Warden spotted them, called them back and [Clarke] was charged on behalf of the group, taking responsibility for everyone’s action."

Clarke was fined under the section 7(1) of the Canada National Parks Act, for entering a closed/restricted area.

The black swifts have been designated as an endangered species since 2015, when the Committee on the Status of Wildlife in Canada (COSEWIC) assessed the species as having highly specialized feeding and nesting habits, making the birds susceptible to population decline.

Previous numbers of nesting birds at Johnston Canyon showed peak numbers in the early 1980s with up to 12 nests, while current day numbers show one to two nesting pairs only.

The black swift breeding range is restricted to southern B.C. and southwestern Alta., but the birds also have isolated populations in the western United States, Mexico and the Caribbean, according to the Canadian Government website.

"The species has been identified as a priority for conservation and/or stewardship in one or more Bird Conservation Region Strategies in Canada," according to Parks Canada's website.

The closure was also put in place to prevent erosion, trampling and disturbance of sensitive ground and riparian vegetation, and to support the safety of visitors within a canyon environment containing numerous steep, wet and slippery slopes, according to Parks Canada.

The maximum penalty for entering the enclosure is $25,000.