BANFF –Passenger rail, or bus-based mass transit, from Calgary to Banff to deal with congestion chaos in the Bow Valley is doable but expensive, according to a new study.
0
Feb 28, 2019 12:00 AM By: Cathy Ellis 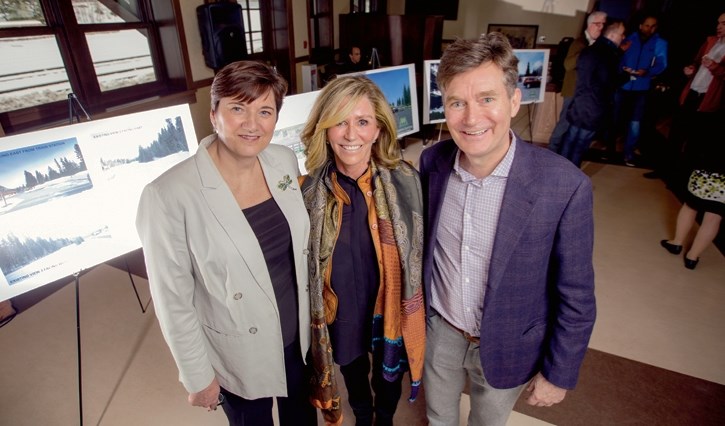 Banff Mayor Karen Sorensen, left, along with Jan and Adam Waterous from Liricon Capital, stand in front of revitalization images at the Banff Train Station at a previous open house on the project.

BANFF –Passenger rail, or bus-based mass transit, from Calgary to Banff to deal with congestion chaos in the Bow Valley is doable but expensive, according to a new study.

The mass transit feasibility study commissioned by Banff, Canmore, Cochrane, Calgary and ID9, was released Wednesday (Feb. 27) and determined many visitors would shift from driving vehicles if convenient mass transit was an option.

Officials say the partnership group hasn’t selected a preferred mode of mass transit and is keeping all options open, adding next steps involve funding talks with the provincial and federal governments, as well as potential partnerships with the private sector.

With an estimated four million tourists a year, road congestion in and around Banff is increasing, leading to longer travel times, more greenhouse gas emissions, increased traffic in wildlife corridors, and a poorer quality experience for visitors, they say.

“I believe with the number of individual cars travelling from Calgary right to Lake Louise that mass transit is the best answer … my hope is there are more options for people to leave their vehicles at home.”

To make way for the return of passenger rail, a new track along Canadian Pacific’s right-of-way would need to be built, subject to reaching an agreement with CP. Terminating at Banff, there would be train stops along the way, including Cochrane, Stoney Nakoda and Canmore.

The consultants estimate the required capital costs for passenger rail range from $660 million to $680 million. Operating costs, after fare revenue is considered, would be between
$8.1 million and $9.1 million.

Banff’s Adam and Jan Waterous, through their personal financial holding company Liricon Capital, have already secured about $700 million to go towards capital costs of a new line for passenger trains from Calgary to Banff.

Having bought the lease for the train station and surrounding 32 acres of land, the couple’s goal is to create a transit hub at Banff’s west entrance, which includes a return of passenger rail and an aerial gondola to Mount Norquay.

Jan Waterous said there’s no concrete assurance that CP will allow for the construction of a parallel track in its rail corridor, but said “they are open to this.”

“We saw immediately when we bought the long-term lease for the station that there needed to be a dedicated line because CP Rail is not in the passenger rail business, they’re in freight,” she said.

“We have been assembling the capital to allow us to do that and now we’re at a point where we’ve assembled about $700 million in capital,” she added, noting the intent is the province would operate and subsidize the operation of the train service.

For a bus service, year-round scenarios are expected to have capital costs ranging from $8.1 million to $19.6 million. The operating costs for bus transit, after fare revenue is considered, would be about $2 million to $2.3 million per year.

The consultants calculated costs for both train and bus transit based on adult fares between $10 and $15, for train or bus service.

The Bow Valley Naturalists say everybody endorses the concept of transit, particularly from a greenhouse gas emissions perspective, but it also brings more visitors to the
national park.

“I think it is naïve to think we don’t have a visitor congestion problem also. It’s really important we have a visitor management plan and some concept of limits to growth,” said Reg Bunyan, a spokesperson for the local environmental group.

“We just can’t keep putting more people into Johnston Canyon and Lake Louise promenade, and yet at the same time put these people elsewhere. We need to think about where they’re going to go and not going to cause severe ecological impacts.”

Leslie Bruce, president and CEO of Banff Lake Louise Tourism, said the organization is pleased mass transit has been given the thumbs up and is excited to be part of a movement to help reduce congestion.

A team led by independent consultant, CPCS, was awarded the contract to conduct the study. The $350,000 study was paid for by the province.